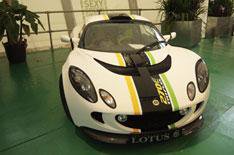 Just to prove that you don't have to compromise on performance to go green, Lotus has produced the Exige 270E Tri-fuel concept car - the most powerful version of the Exige ever.

Powered by a supercharged 1.8-litre engine, it runs on petrol, bioethanol and methanol - or a mixture of any of them.

Because of the higher octane rating of ethanol and methanol, it is able to extract more power from the fuel.

What's more, Lotus ultimately believes that methanol production can be achieved without releasing any harmful emissions into the atmosphere.

'Methanol is basically hydrogen combined with carbon,' explains Lee Jeffcoat, a Business Development Manager at Lotus. 'The carbon can come from any sort of biomass or organic waste, and the hydrogen from established processes such as electrolysis.

'The waste products are water and carbon dioxide, which can then be recycled into methanol production again.'

So when will we see methanol-powered cars in production?

'It's at the research stage at the moment, and still some years off production,' says Jeffcoat. 'But we do see it as one of the potential solutions to making driving greener, and along with the other technologies, it will play an increasing part in our lives.'