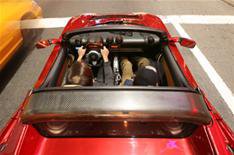 On a local level the Tesla emits no carbon dioxide but, naturally, CO2 is involved in the production of the electricity that the car uses.

Using an average figure for energy production, the Tesla emits 68.2g/km on a well-to-wheel basis. Even if all of our electricity came from the worst type of coal-fired generating stations, emissions are still likely to be 100g/km or less.

Remember, too, that this has the same performance figures as a 911 Turbo which emits 307g/km of CO2.

The production of cars typically accounts for 10% to 15% of a car's lifetime CO2, but in the Teslas case its more since its tailpipe emissions are so low.

Also, rolling chassis are currently assembled in Norfolk, shipped over to the US for their engines to be fitted, and then shipped back to the UK for delivery.

Thats not efficient, so Tesla is looking at shipping motors and battery packs to the UK for final assembly instead, hopefully by 2010.