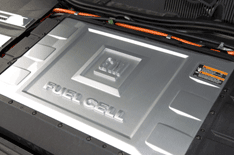 GM claims to have the largest fleet of hydrogen fuel cell cars on test in the world. One hundred Chevrolet Equinox crossovers are being loaned to people in the USA, Europe and Asia, and have now completed more than 1.2 million miles of testing. We've driven one in China, and it feels no different to a battery-electric vehicle.

Fuel cells mix hydrogen and oxygen in a metal box known as a fuel stack to create electricity for propulsion, with water vapour as the only emission. They have been the holy grail of a number of engineers for more than a decade, but the cost of the exotic materials in the fuel stack and the lack of a hydrogen refuelling infrastructure have held back progress. However, last year seven major car manufacturers signed a letter committing them to making fuel cells commercially available by 2015.

'It will be half the size and weight of today's system, and the cost will be significantly decreased because it uses just 30 grammes of platinum instead of 80. By 2020-22 we will have reduced the platinum content to two grammes. A lot of discussions are taking place on establishing a supporting infrastructure, but initially it will need to have some government support.'