Is this the new Ford Ka?

* Appears in next Bond movie * Official unveiling expected at Paris motor show * Car is based on Fiat 500 platform... 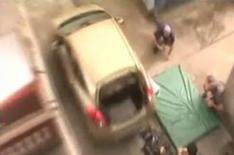 Is this the new Ford Ka?

Company insiders certainly think so, although quite why James Bond has swapped his Aston Martin for Ford's supermini isn't quite so clear.

These blurry images have been taken from an official behind-the-scenes video for the next Bond movie, Quantum of Solace.

Its appearance follows a deal between Ford and the producers of the James Bond series, which allows the car manufacturer to show off its vehicles in 007 movies.

The Ford Ka is expected to be unveiled at the Paris motor show in September, while the film is mooted for release on November 7.

It is based on the same platform as the Fiat 500, although it will not share any visible parts with it.