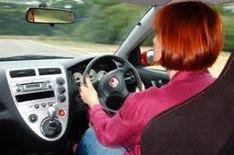 The UK's men are left cowering in the passenger seat when their wife or partner takes the wheel, according to a new poll.

A study by market research firm OnePoll.com has revealed that 10% of men have been forced to grab the steering wheel because their partner had lost concentration and veered towards the central reservation.

A OnePoll.com spokesman said: 'Most men feel they are better drivers than the women in their lives.
'They believe they concentrate a lot better, read road situations more quickly and clearly, and have better reactions.

'One in five even went as far as to say they were never able to relax when their other half is driving.'

Disharmony on the move
The research also revealed that 20% of couples have argued about the quality of the other's driving skills.

Men's biggest criticisms of their partner's driving were that they were too easily distracted by children, scenery, or other drivers.

One in 10 men also admitted to asking their partner to pull over, so that they could take the wheel.

Women. Have your say
Women, tell us your reaction to these claims made by men and tell us your own experiences of being driven by your husband or partner.
[E-mail us here](mailto:iain.reid@whatcar.com?subject=Women have your say)