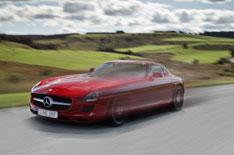 A Swedish driver is facing a record-breaking 650,000 speeding ticket after being clocked at more than 186mph in Switzerland.

Speeding fines are calculated by taking into account the income of the motorist and the speed at which they were driving.

The driver was behind the wheel of a 160,000, 197mph Mercedes-Benz SLS on the A12 motorway between Bern and Lausanne on Friday.

Too fast to pay
However, the driver might consider himself fortunate to not be in more trouble, because Swiss prosecutors revealed he could well have been caught by many other speed cameras on the route had he not been driving beyond the speed they operate. Old-style Swiss radar devices do not operate above 125mph.

Previous record fine
The 650,000 fine is thought to be the world's largest. In January, a Ferrari driver was fined 182,000 after being caught driving at 85mph in a 50mph zone - again in Switzerland.