Meriva to get rear-hinged doors

* Insiders reveal rear-hinged door plan * Project given go-ahead after safety checks * Due to go on sale in mid-2010... 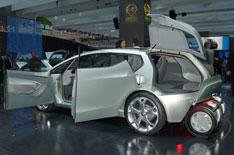 The next-generation Vauxhall Meriva will feature rear-hinged back doors, according to company insiders.

The idea has been given the go-ahead after engineers were able to convince Vauxhall bosses that the unusual layout could be just as safe as conventionally opening doors. In order to achieve this, the doors will feature locks that only release when the car is at a standstill.

Although the layout will retain a central pillar for strength, it is said to greatly ease access to the back of the car. This is expected to appeal to elderly buyers or anyone with children.

The decision also follows the precedent set by the Flextreme concept car, which featured rear-hinged back doors that will make it onto the upcoming revised Zafira.

A new Vauxhall Meriva is due in late summer 2010, with a concept version due to be shown at the Geneva motor show in March.