More for you |
2021 DS 9 luxury car revealed: price, specs and release dateWhat is GAP insurance and how much should you pay for it?Why does the new Hyundai i10 get five stars?New MG ZS EV vs new Renault Zoe2020 Jaguar XE long-term test review
Home
News
More self-braking cars on the way
news

More self-braking cars on the way 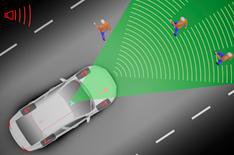 Motor industry research centre Thatcham is working towards a new rating scheme for the systems and believes they could become an essential part of a five-star Euro NCAP rating by 2013.

Thatcham collected a range of new and emerging technology together this week to demonstrate the benefits.

BMW showed its new camera-based system that like Volvo's pioneering technology can detect both cars and pedestrians. The system automatically applies the car's brakes to either avoid a collision or reduce impact speeds. It should be ready within the next two years.

Subaru also showcased its camera technology, which is already available in Japan for the equivalent of 700. It can detect only cars at present. Subaru says it will soon bring the system to Europe.

Ford is about to bring automatic braking to a much wider audience through laser-based technology available in the new Focus. Lexus is also ready to launch a new radar-based system in 2012.

Technology could prevent 75% of accidents
Wider fitment of such automatic braking systems could help to prevent a huge amount of collisions. Thatcham says 75% of accidents occur below 20mph speeds at which the technology can prevent collisions entirely and it claims evidence of the benefits is already being seen through the lead taken by Volvo.

Thatcham says that 150,000 deaths and injuries would be prevented each year if every car was equipped with such technology. That would save 2 billion a year.

The research body also hopes its new rating system will prompt Euro NCAP to make a five-star rating impossible without the collision avoidance technology, which would further accelerate its wider adoption.