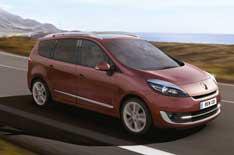 Renault Scnic
What is it? Face-lifted MPV gets a new look
Price from 16,700 (est)
On sale February

New bumpers, light lenses and grilles give the Scenic and larger, seven-seat Grand Scenic a fresh look. LED daytime running lights have been added and there is extra gloss black and chrome exterior trim.

Two new versions are available. The 1.5 dCi Stop & Start uses the existing 1.5 dCi diesel engine, but adds stop-start and brake energy regeneration systems. CO2 emissions compared with the current 1.5 dCi are down by 23g/km to 105g/km, while fuel economy rises 11.3mpg to 68.9mpg.

New options include Renaults Visio System, which combines a lane departure warning system with an automatic headlight function that detects the lights of nearby vehicles and/or street lighting. Hill Start Assist is now standard on all versions.

Prices and specification for the 2012 Scenic range are yet to be confirmed, but wed expect only a small increase over the current model.

Toyota Prius+
What is it? Seven-seater based on Prius hybrid
Price from 27,000 (est)
On sale Summer

Hybrid technology is spreading to every corner of the car market, and the Prius+ is the first seven-seat MPV to use it.

As the name suggests, the Prius+ is based on Toyotas Prius hybrid hatchback, but theres more to it than simply a larger body. Clever repackaging means that the Prius + is a proper seven-seater, with space for adults to sit in the rearmost seats.

The Prius+ has an all-new lithium-ion battery pack, which has been moved from beneath the boot floor to the centre console between the front seats. Its smaller than the nickel-metal-hydride pack in the standard Prius and sits vertically, rather than horizontally.

Power is from a 1.8-litre petrol engine and a 60kW electric motor, which combines to give a total output of 134bhp. Average fuel economy is 65.7mpg and the car emits 99g/km of CO2. It wont be cheap to buy, but every Prius+ is likely to have lots of standard equipment.