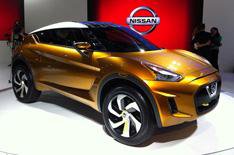 The Nissan Extrem concept car has been unveiled at the 2012 Sao Paulo motor show in Brazil.

Nissan says the Extrem has been designed specifically for Brazil. It is the same width as a Nissan Juke, but is shorter and lower. It also has a shorter wheelbase.

Like the Juke, the Extrem blends coupe styling cues with an SUV stance. The Extrem is much more aggressive, however, with a front grille and headlights that show the influence of Nissan's 370Z and GT-R sports cars. The steeply sloping rear is more dramatic than the Juke's, too.

Nissan says the Extrem is strictly a concept car and that there are no plans for a production version. It has confirmed that elements of the Extrem's styling will influence the look of Nissan's future international products, however, so some of the Extrem's features could filter through to the next Juke and Qashqai models.

Nissan Extrem is the same width as a Juke, but it's shorter and lower

Nissan says there are no plans for a production version of the Extrem, but that its styling will influence future models