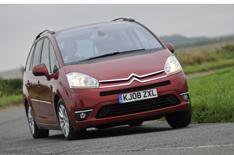 Here's how other MPVs rated in this year's JD Power Vehicle Ownership Satisfaction Survey. You can also take a look at our 'in focus' analysis of this particular sector.

Citrons mid-sized MPV continues to impress. According to owners its cheap to run and is well designed inside and out.

The experience at dealers is good too. Only a few gripes with reliability marred things.

Three and four-star ratings abound on the Mercedes scorecard. From servicing through to the overall appeal of the car, owners were a fairly contented bunch.

Their big concern seemed to be poor refinement over bumpy roads.

Respondents are clear: this MPV drives brilliantly. Thats no wonder as its based on a Golf. Fabled VW build quality wasnt borne out by the results, though: the car lost points for letting in wind noise and water.

Story continues below...
In focus
Toyotas ups and downs
One of the shocking stories of this years survey is the Toyota Versos fall from grace. The MPV fell an incredible 60 places to 91st in the overall model rankings.

The car underwent only a minor face-lift during the year, so the obvious culprit would seem to be the recalls that blighted the Japanese manufacturer in 2009 and 2010, the years in which the JD Power survey was carried out. The most serious was when 220,000 Toyotas were recalled following an accelerator problem. A total of eight cars were involved: the Aygo, iQ, Yaris, Auris, Avensis, Prius, RAV4 and this years low-scoring Verso.

A closer look at the survey suggests that while new buyers abandoned the brand (sales fell by 14% over this period) not all owners were affected by the negative press. While the Verso and Yaris rankings dropped in a big way, others including many involved in the recall performed well. The Prius climbed from sixth to fifth and while the Auris went from 53rd to 62nd, the RAV4 jumped from 14th to sixth. The survey reflects the poor few years the brand as a whole has suffered: it dropped from fifth to tenth. 5 Citron C4 Picasso
Satisfaction rating 79.8%
Overall 55th=

The C4 Picasso put in another strong performance this year. It scored credibly
in all categories and was generally praised as a robust, capable machine. That said, some respondents complained of problems
with seats and interior trim.

Fords large MPV has stormed up from last place to sixth. Reliability is still not the seven-seaters strong point, but the design of the vehicle won praise. Respondents were also impressed with the flexible arrangement of the seats.

The C-Max had fewer reliability problems than its bigger brother, the Galaxy. The music system was deemed particularly good, as was the standard of service owners received. The verdict on interior quality was only average, though.