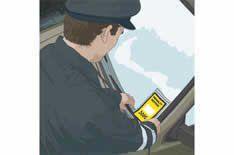 The number of drivers issued with parking tickets has gone up by 500% in just six years.

However, these figures only apply to councils who have taken over parking enforcement from the police.

If London and other councils that still rely on the police to enforce parking are taken into account, more than eight million tickets were issued, generating about 480 million in fines.

There was some good news, though - of the 10,000 motorists who appealed against their parking tickets, 68% won their case.