More for you |
Every 5-star car on What Car?Used test: Maserati Levante vs Porsche MacanNew issue of What Car? magazine on sale nowMost and least reliable small SUVsRevealed: the car makers whose discounts have got bigger since lockdown
Home
News
Pay-as-you-drive roads 'inevitable'
news 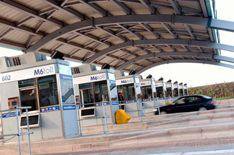 Making drivers pay to use the UK's roads is inevitable if traffic gridlock is to be avoided, according to a report by the RAC Foundation.

Traffic to increase by 33%
The foundation's director, Professor Stephen Glaister, believes economic recovery and population growth could result in a 33% increase in traffic by 2025.

He believes such an increase in traffic, combined with Government spending cuts, means a total reform of current road strategy is required.

A 'pay-as-you-go' system could be the only way to keep the country's traffic flowing, says the foundation.

Problems on the road ahead
The RAC Foundation's report has identified several major problems facing road users and the Government in the coming years. These include:

• Lack of vision for the road network
• A 33% increase in road traffic by 2025
• An associated increase in congestion and unreliable journey times
• Increased pressure to meet carbon-reduction targets
• Reduced spending on the road infrastructure
• A significant reduction in fuel duty revenue, due to increase in use of alternative fuels

A survey carried out by Ipsos MORI, launched alongside the foundation's report, revealed that 58% of drivers agreed that a pay-as-you-go system that charged by the mile, would make them more aware of how much they drive.

The foundation's report says that to gain public backing for charging drivers by the mile, such a system would have to include:

Professor Glaister said: 'Our poll shows that most people are instinctively opposed to road charging when they think it is an extra tax, but when the details are explained and they realise the benefits then the opposition falls away dramatically.

'Motorists are resentful of the relentless rise in the cost of fuel and feel short-changed by the amount spent on the road network. These proposals address such issues.'

No plans to charge
A Department for Transport spokesman said: 'We have no plans to introduce a charging programme for existing roads, which are publicly owned and have already been paid for by the taxpayer.

'To tackle congestion in financially constrained times we will ensure we are making the most of our existing roads.

'We might, however, consider building new toll roads. The M6 toll road is a good example of how you can create new capacity with private capital.'