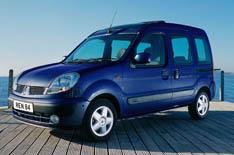 The Kangoo's adult occupant protection score was compromised because the steering column presented a potential risk to the driver's upper leg and chest protection for both front-seat passengers was marginal. As a result, it scored four stars.

The two star pedestrian protection score reflects the fact that the bonnet surface was rated as predominantly poor for the protection it offered to the head of an adult the car had hit.