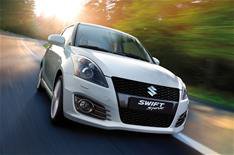 What is it? This is the second-generation Suzuki Swift Sport.

The previous model was one of our favourite hot hatches when it was launched in 2006, because of its simple, old-school charms. Now Suzuki has used the same recipe again, but is it enough in a modern-day hot hatch world dominated by 200bhp+ monsters?

Whats it like to drive? The Swifts rev-hungry 1.6-litre petrol engine might dish out a mere 134bhp a fairly tame figure by modern hot hatch standards but the Suzuki weighs a third of a tonne less than a VW Golf GTI, so performance is still lively.

If you keep the revs high, snap through the close-ratio six-speed gearbox (the previous model made do with a five-speed unit) and the Swift will hit 62mph in 8.7 seconds. Thats quick enough acceleration to give a Renaultsport Twingo a fright, but its on twisty roads where the Swift really shines.

It darts from corner to corner with virtually no body lean, while the quick, well-weighted steering gives you the confidence to really push it to its limits.

The previous Swift Sport was great fun to drive, too, but it wasnt nearly as easy to live with as this new one. The extra gear has made the engine much more relaxed on the motorway, and has also helped cut fuel consumption to 44.1mpg and CO2 emissions to 147g/km a 10% improvement on the old car's figures.

Whats it like inside? The easy life continues inside, because Suzuki has loaded the new Swift Sport with enough goodies to keep BMW 3 Series drivers happy let alone junior hot hatch buyers. You get cruise and climate controls, keyless start, privacy glass, Bluetooth and a USB socket for your MP3 player.

Stability control is standard to help keep you pointing in the right direction, and seven airbags are there as back-up if you need them.

The cabin itself looks much like a regular Swifts, which means its solid but uninspiring. There are a few highlights, such as the red stitching on the steering wheel and the gearknob, and figure-hugging sports seats, but the hard grey plastics on the dashboard are a reminder that the Swift Sport is at the lower end of the hot-hatch hierarchy.

Should I buy one? Suzuki is on to a winner if the estimated price of 14,000 proves accurate. The new Swift Sport isnt ground-breaking in any respect, but it improves on the previous car in a number of key ways without losing the old-school magic that made it such a success in the first place.

The new Swift wont have things all its own way when it arrives in January, though. A revised Renaultsport Twingo is due to go on sale at around the same time, and while this is likely to be poorly equipped compared with the Suzuki, it will boast an even lower starting price of around 12,500.