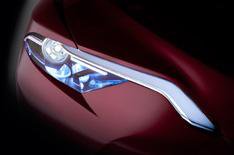 This sneak preview shows the Toyota NS4 concept car, which will be unveiled in full at the Detroit motor show in January.

Toyota has released no further images or information about the car, but has confirmed that it has a plug-in hybrid powertrain, like the new Prius Plug-in Hybrid, which goes on sale in the UK in June.

Toyota hasnt confirmed whether a production version of the NS4 will be built, but it could preview design features that will be used for the next-generation Prius.

Toyota will also show the Prius C at Detroit. The supermini-sized hybrid is built for the US market and wont be sold in the UK. Instead, Toyota will launch the Yaris Hybrid in June.