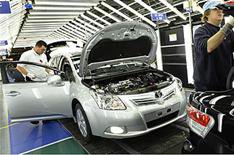 Toyota is planning further cutbacks in production at its factories in the UK.

A shorter working week or a temporary shutdown is expected to be announced on Wednesday, as Toyota seeks to slash its costs in the face of sharp falls in new car sales.

A spokesman said: 'We have to reduce our costs further. Our employees recognise that and we are seeking agreement with the unions.'

The manufacturer employs more than 4000 workers at its factories in Burnaston, near Derby, and Deeside in North Wales.

The plant in Burnaston builds the Avensis and Auris models, with 85% of the cars exported. Toyota's European sales fell by 10% last year.