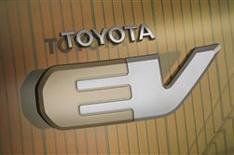 This is the first image of a new Toyota battery-electric concept car that will be unveiled at next month's Detroit motor show.

Details are extremely scarce, with Toyota revealing nothing more than this picture.

The show is also set to feature the new Toyota Prius, which is expected to be powered by a 1.8-litre petrol engine combined with an electric motor.

The new car will be capable of more than 70mpg on average, while emissions should be less than 90g/km.