* Buyers told to check details of seller * Thousands of stolen documents in circulation * that could be used to clone cars... 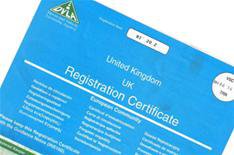 Experts are warning buyers to check the addresses of anyone selling a used car.

The advice comes after the theft of thousands of numberplates and registration documents, which could be used by rogue traders to defraud buyers.

According to estimates from the Home Office, 45,000 numberplates were stolen between 2009 and 2010, and it is feared that thousands of registration documents stolen in 2006 are also in the hands of fraudsters.

These could be used to clone cars when rogue traders copy the numberplate and other details of a legitimate car on to a similar, but stolen, vehicle. The same people can also copy the genuine vehicle's logbook (V5C form) by using a stolen blank document.

New vehicle registration document
The Government introduced a new vehicle registration certificate in August, but cars already on the road will get these new-style documents only when they are relicensed or declared to be off the road. It is predicted that the old forms will not become obsolete until August 2012.

According to 192.com, whose databases can be used to check a seller's address, 'Three thousand of the stolen documents have surfaced so far, but the police advise that as a worst case, 400,000 of the documents cannot be accounted for and could have fallen into criminal hands.'

In a poll of 1500 people by the organisation, 14% said they had been 'ripped off' when buying a second-hand car and 33% said they never trust a car-dealer when making a financial transaction.

Over 65s most at risk
The age group most likely to be ripped off was the over-65s, with almost a quarter in this group saying they had been scammed.

Buyer beware
According to Gerry Taylor, Trading Standards Institute lead officer for the motor trade, when people are attempting to buy a used car online, they should 'watch out for a website without a landline telephone number, an address, or a customer services option that doesnt work They should also be careful if the traders address appears false or temporary.