VW jumps on the hybrid powertrain

* First of many hybrids * VW Jetta could be next * Green savings explained... 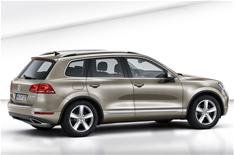 Volkswagen is about to enter the hybrid market with its all-new Touareg, but don't expect it to end there.

VW's hybrid boss, Eike Feldhusen, predicts a long line of successors are sure to follow: 'We have ideas for hybrids from the smallest car to the biggest, but this Touareg is the best way to showcase the possibilities.'

No timetable of launches has been revealed, but it's possible the forthcoming Jetta coupe could be next in line for the hybrid treatment.

Whether or not the Jetta is VW's next alternative fuel project, Feldhusen says the modular hybrid system can easily be adapted for use in a wide range of other products, including diesels.

Touareg Hybrid details
Feldhusen told What Car?: 'Overall the Touareg Hybrid is 17% more efficient, but in town you can increase that figure to 25%.'

Without the hybrid system, the 3.3-litre petrol engine would do an average 28.5mpg at best, instead of 34.4mpg, while emissions would jump from 193g/km to 226g/km in the non-hybrid vehicle.

Company car tax would rise from the 26% to the 33% and vehicle excise duty would increase from 235 to 425 a year. Buyers would also have to pay 135 more in first-year showroom registration taxes at 325, while they'd also miss out on exemption from the London Congestion Charge.

With savings such as these, hybrids make an attractive proposition for buyers, although diesel still holds the upper hand in many situations and will limit the Touareg Hybrid's sales to 10% of the range's total.