We liked - we didn't 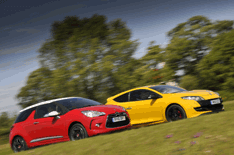 Things werent quite so clever when it came to the Mganes practicality. The optional Recaro seats had a bar running along the bottom of the seatbacks, just where a rear passengers feet would otherwise go. Headroom apart, there was decent rear-seat space, so its something to be aware of if you select the Recaros and intend to have more than one passenger.

Our Mgane rarely had more than two on board, but its boot was often tested to the limit. You had to heave any bags up over the high boot lip and through the narrow opening (people with bad backs take note), but you could cram in a surprising amount; it took a weeks luggage for two to Devon, with only the coats having to go on the rear seats.

The DS3s practicality was better, if far from perfect. There wasnt much space behind the driver, but the dashboard was sculpted to allow the passenger
to sit farther forward, increasing space behind. There still wasnt much headroom, although the boot was far bigger than that of the Citrons biggest fashion-led rival, the Mini.

What we liked - and what we didn't