More for you |
The 10 fastest-depreciating cars 2020Used hybrids: BMW 5 Series vs Volvo S90What is a Cat A, Cat B, Cat S or Cat N write-off?True MPG: most efficient hybrid carsWhy I haven't bought an electric car yet - reader opinion
Home
News
What bits can be recycled?
news

What bits can be recycled?

• What parts can be reused? • Who pays for recycling? • Where to take your car... 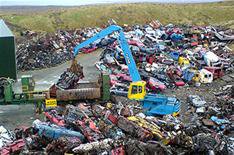 Some parts can be removed, refurbished and then resold, while the rest is shredded, separated and recycled.

Although the majority of recoverable items are metals, it's possible to salvage tyres, windows, dashboards and even batteries.

However, the regulations aren't just aimed at the re-use of a car's parts, they're also designed to make sure that all of its fluids - such as hydraulics, oil and petrol - are disposed of properly, so they don't damage the environment.

The quicker we clamp down on the improper dumping of such fluids the better because, according to www.wasteonline.org.uk, every litre of oil that finds its way into the water system contaminates one million litres of drinking water.