All Q7s come with an electrically adjustable driver’s seat. The range of adjustment – which includes an extendable seat base and four-way lumbar adjustment – makes it easy to find your ideal driving position. The standard seats on entry-level Sport models are supportive enough, but pricier trim levels come with more heavily bolstered seats that hold you in place better through corners.

You’ll also find that the pedals, seat and steering wheel are aligned neatly for a natural driving posture, and there’s a well-positioned footrest to the left of the brake pedal. In fact, our only gripe relates to the climate controls. Adjusting these involves faffing around with a second touchscreen, set low down underneath the infotainment screen. Because you have to hit small icons, instead of physical buttons that you can find by feel, you have to look away from the road simply to change the temperature. The BMW X5's climate control buttons are mainly physical, and they're much less distracting to use.

Audi's Virtual Cockpit is standard and swaps conventional analogue instrument dials for one giant, 12.3in digital panel that sits behind the steering wheel. This can display speed, revs and other driving essentials alongside a full-screen sat-nav map, phone or audio information.

As is the case in most big SUVs, you sit up high in the Q7 for a commanding view of the road ahead, and its slim windscreen pillars do little to obstruct your vision.

Large, heated door mirrors offer a clear view of what’s approaching from the side, and the left-hand mirror tilts down automatically when you select reverse for a better view of the kerb when parking. Powerful Matrix LED headlights are standard on all Q7s, which can stay on main beams without blinding any cars in front. You can even specify cutting-edge laser units that project light roughly twice as far down the road at night.

Thick rear pillars and the rear headrests block much of your over-the-shoulder view, especially when people are sat in the third row of seats. Yet with a rear-view camera and front and rear parking sensors standard on all trims, you should find reversing too much of an issue. A 360deg camera comes as standard if you go for range-topping Vorsprung trim. 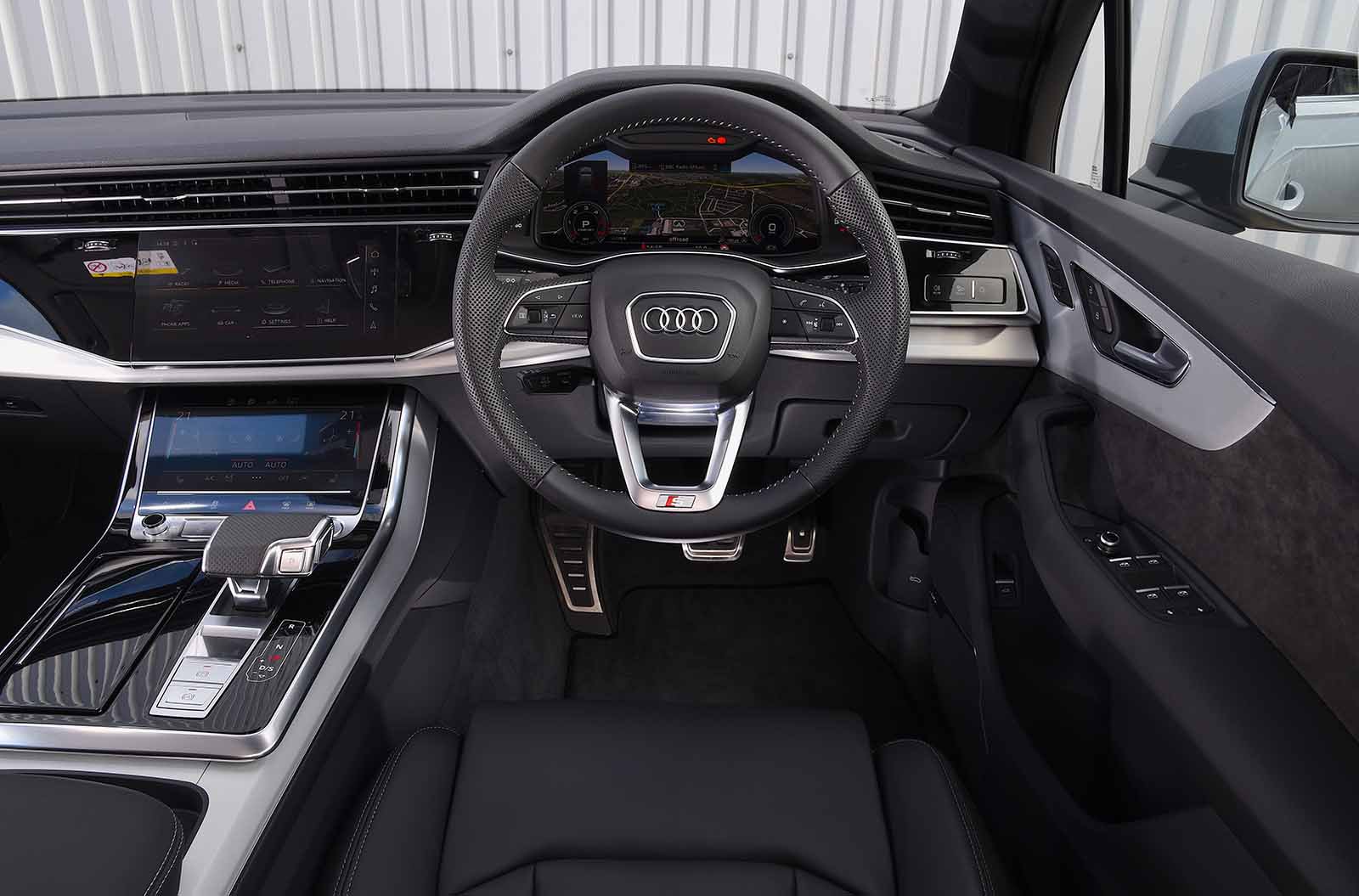 The infotainment system in the Q7 was overhauled during the facelift in 2019. 'That's good news,' you might be thinking? Hmm, sadly not. The current system is actually a backwards step when it comes to usability.

You see, the Q7 now has a touchscreen, rather than the separate rotary controller interface that it used previously, and, like the climate control screen we mentioned earlier, it's rather distracting to use while driving. Some of the screen icons are small and tricky to touch with any degree of confidence when you’re on the move, although the display (which measures 10.1in) does at least respond quickly to presses and gives you haptic feedback to confirm when a selection is made.

It’s better than the infotainment system you get in the Volvo XC90, but the BMW X5 and the Mercedes GLE are ahead when it comes to usability because they both feature separate controllers and shortcut buttons (to use in conjunction with their touchscreens) that help you keep your eyes on the road. Meanwhile, all trim levels come with Apple CarPlay and Android Auto smartphone mirroring, a natural speech voice recognition system (which allows you to bypass the touchscreen for some functions), wireless phone charging and a 10-speaker sound system. Premium stereo upgrades are available for you audiophiles out there.

The Q7’s interior is a universe of soft-touch materials, glossy black veneers, smart brushed metal trims, along with well-damped, precision switches and multi-coloured ambient lighting. Any lower-grade plastics are confined to the places you won’t see or feel them as a matter of course, and this isn’t something we can say about the Mercedes GLE.

In short, the Q7 feels incredibly well screwed together, with tight gaps between the exterior body panels and interior trims. An Extended Leather pack, which covers the dashboard and doors armrests in hide, is optional on entry-level Sport models and standard on all other trims. All things considered, the Q7 is classier inside than nearly all of its direct rivals – including the XC90.