Even those well over six-feet tall will find the Q7 roomy in the front; head room is very generous and the seats slide back a long way to deliver lots of leg room. It's wide inside, too, so there’s loads of elbow room.

The large door bins will each take a 1.5-litre bottle, and there are two cupholders next to the gear selector. Under the front centre armrest, you’ll find another cubby with a protective rubber tray that makes it an ideal place for stowing your mobile phone.

Meanwhile, the glovebox is big enough to hold bulkier objects, such as a can of de-icer or a window scraper.

Getting in and out of the second-row seats is easy, thanks to large rear door openings and slim sills. The Q7 offers a few centimetres more leg room than the BMW X5 and Land Rover Discovery and virtually matches that of the Volvo XC90. That means tall adults have plenty of space for their knees, and there's a generous amount of head room, too. There’s also enough shoulder room for three adults to comfortably sit side by side.

Tall adults won't want to sit in the two third-row seats (not fitted to the plug-in hybrid 55 TFSI e) on long trips, but anyone under six feet won’t feel ridiculously cramped. Sitting right at the back of a Q7 is certainly a more pleasant experience than it would be in the BMW X5 or Mercedes GLE, for example. A Discovery or a BMW X7 is a better bet if you regularly need to carry seven adults, though.

The Q7 is one of the very few cars on sale with six Isofix mounts, so it's a seriously child-friendly choice. 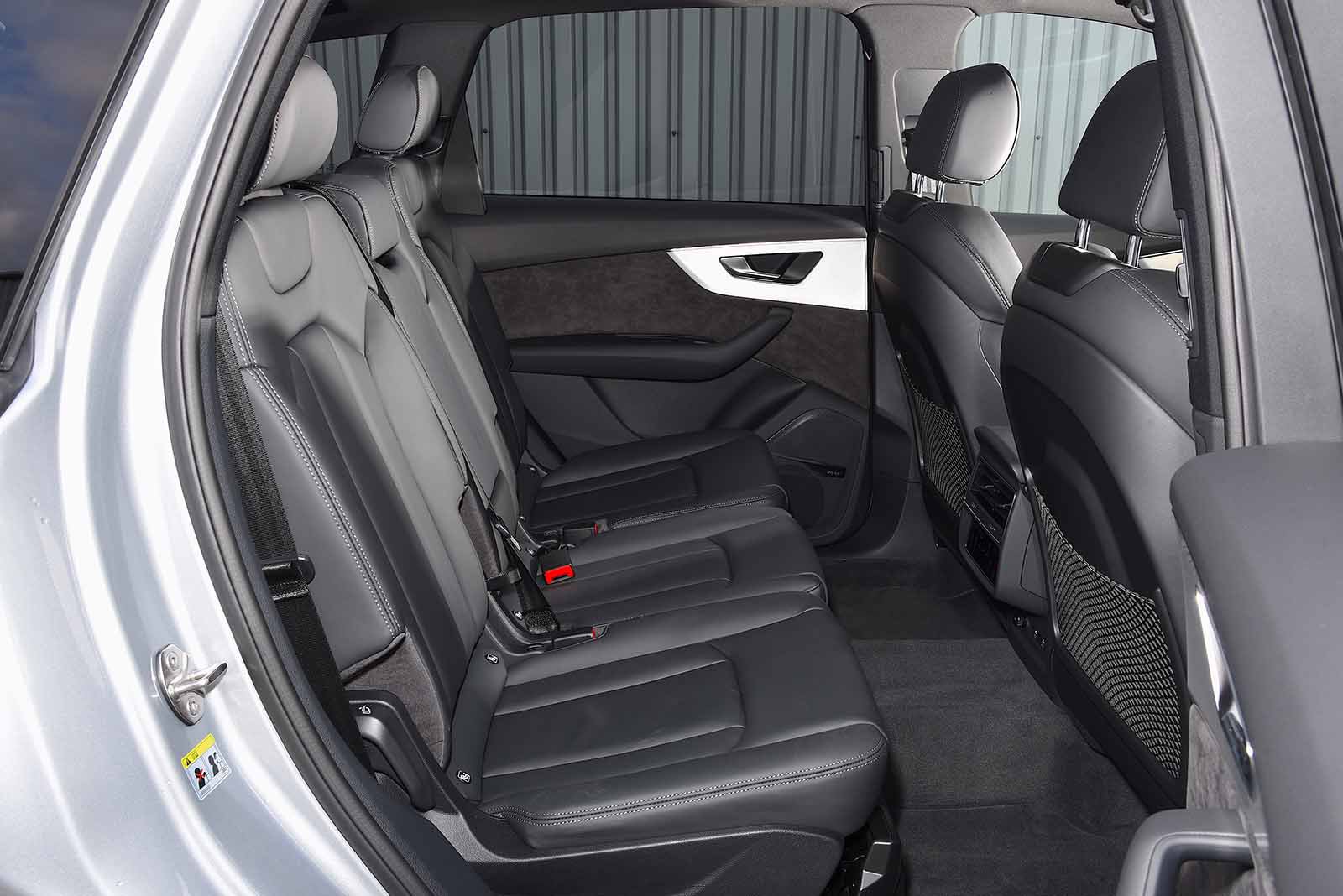 All three seats in the second row slide backwards and forwards independently of one another and have reclining backrests; the outer two seats tumble forward pretty easily to allow access to the third-row seats (not available in the plug-in hybrid 55 TFSI e).

If you need extra luggage space, the second-row seat backrests can be folded down in one simple operation using a lever at the base of each seat. Because they fold independently of each other, you have the flexibility to carry long loads while still carrying rear passengers.

Meanwhile, the two third-row seats lie flush with the boot floor when folded away. They are raised or lowered individually at the touch of a button using controls placed just inside the rear doors as well as inside the boot itself.

In five-seat mode, even with the second row of seats slid fully back, the boot is big enough to take 10 carry-on suitcases or a couple of buggies below the tonneau cover. There are four lashing eyes, plus a small cubby on the left-hand side. With all seven seats in place, the boot shrinks to less than half its size but will still hold a couple of carry-on cases. In this arrangement, you'll fit more luggage in the Q7 than you would in a Land Rover Discovery.

If you fold down all five rear seats, you’re left with a vast space and a completely flat extended load area. This makes loading bulky items a piece of cake, especially because there’s no lip at the boot's entrance. An electric tailgate is standard on every Q7.

A word of warning: the plug-in hybrid 55 TFSI e has a slightly smaller boot than regular versions of the Q7. This is because it loses the underfloor storage area to accommodate the battery pack.