The driver’s seat in the 3 Series Touring is comfy enough for a long journey, yet has enough bolstering to hold you in place during quick direction changes. It’s a shame, though, that adjustable lumbar support costs extra even on top-spec models; it's not that pricey, though, and definitely worth adding.

Thanks to extensive adjustment in the steering wheel and seat, you’ll find a decent driving position in a matter of seconds. In fact, as you sit there with a large, well-padded armrest for each elbow to rest upon, you might think ‘perfect’ sums up the 3 Series Touring’s driving position, but it's not quite as good as the Volvo V60's for one key reason: the pedals are offset slightly to the right. It's a problem that also exists in the Audi A4 Avant and Mercedes C-Class Estate, and it isn’t a major blight.

The dashboard layout itself is excellent. Yes, the air-con controls could ideally do with being a bit chunkier, and we'd rather have dials than buttons for adjusting the temperature, but these are relatively minor grumbles. The digital dials you get from M Sport trim and up (BMW calls this Live Cockpit Professional) have a clear layout and a high level of configurability, while the optional Technology Package adds a handy head-up display.

The fact that you sit fairly low in the 3 Series Touring adds to its sporty feel, but thanks to comparatively slim windscreen pillars, forwards visibility is still excellent. By contrast, the rearmost pillars are fairly thick, and restrict your over-the-shoulder view. Not to worry, though, because you get front and rear parking sensors, a reversing camera and BMW's Parking Assistant system, which can identify a suitable space and steer you into it, all as standard.

There's an optional 360deg camera that offers multiple views around the car, but the image flits from one camera position to the next as you get closer to obstacles. That's quite distracting when you're but centimetres away from an imposing wall – it would be more helpful if the image stayed consistent.

All 3 Series Touring models get powerful LED headlights and you can take things one step further by upgrading to adaptive laser lights. Not only are these even brighter, but they can automatically change the shape of the light pattern they cast, to avoid dazzling oncoming drivers, even on high beam. 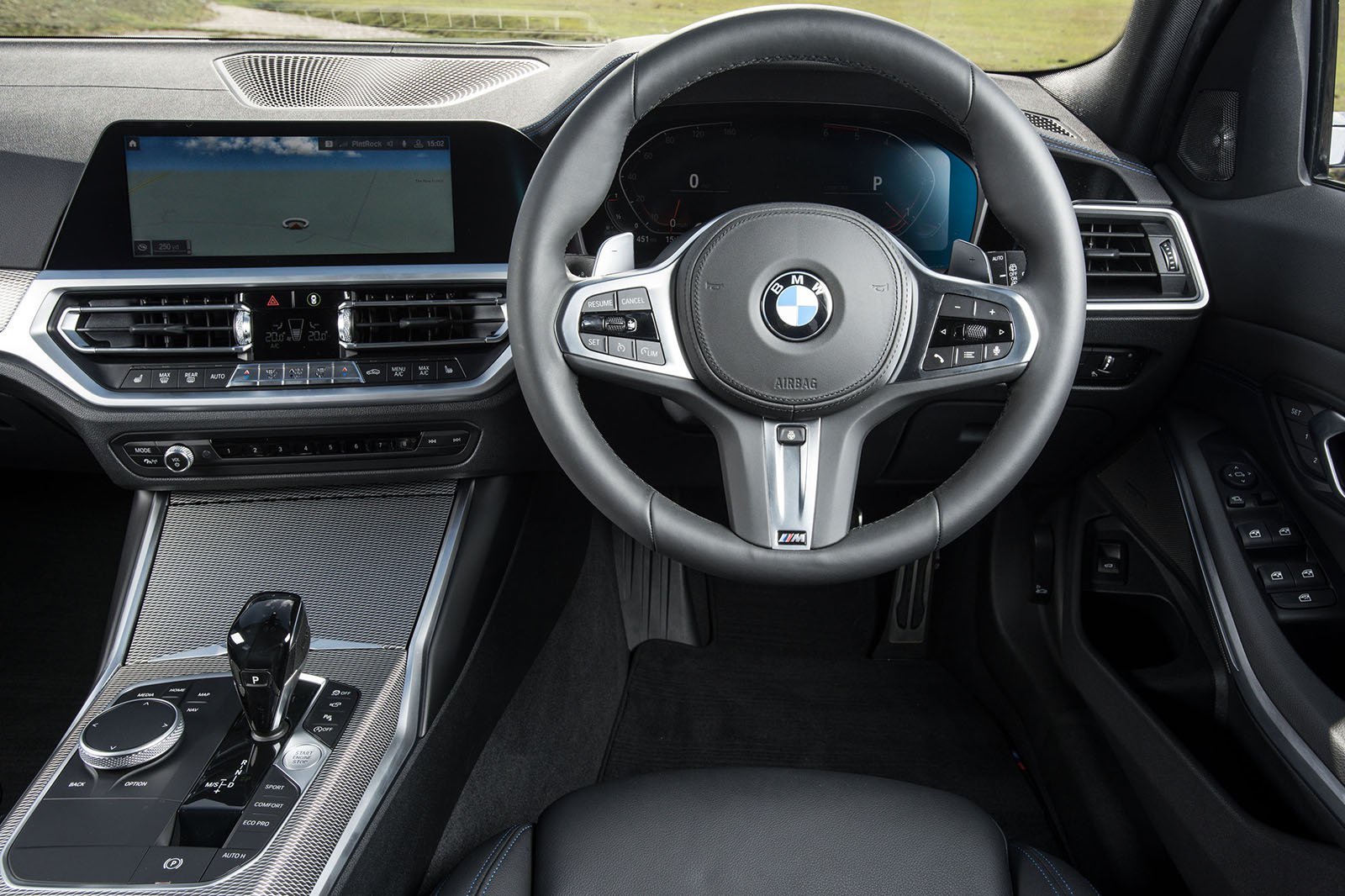 SE and Sport trims come with an 8.8in infotainment touchscreen, which grows to 10.3in if you opt for top-spec M Sport. Either way, the host of features you get includes sat-nav, Bluetooth, a DAB radio and Apple CarPlay and Android Auto smartphone mirroring, as well as subscription-based connected services that provide access to the internet (you initially benefit from a ‘free’ three-year subscription that can then be extended or renewed for a fee).

More positively, BMW's infotainment system (called iDrive) is wonderfully easy to use. That's partly thanks to its secondary rotary controller between the front seats; you twist it to scroll through the on-screen menus and press it to make a selection. When driving, it's a much easier (and safer) method than using the touchscreen. There's also a voice control function that is initiated by saying 'hey BMW'. It works surprisingly well for the most part, unlike the gimmicky (and thankfully optional) gesture control.

Other options include the Technology Pack, which adds wireless smartphone charging, a wi-fi hotspot, a Harman Kardon premium sound system and gesture control. The latter allows you to carry out functions, such as changing the volume or answering a phone call, by making hand gestures in the air.

There isn’t much to complain about quality wise in the 3 Series Touring. The dashboard is nice and squidgy, and the metal-effect buttons feel pleasingly solid when you press them. There’s also a good choice of interior trim choices, including a futuristic-looking metal mesh effect or more traditional open-pore wood.

We have to nitpick – it’s part of our job – and there are certain areas, such as around the gear selector, where you don’t get the same classy finish as you’ll find in an Audi A4 Avant or Volvo V60. The 3 Series Touring's interior still beats the vast majority of executive estates for quality, though.