Diesel has proven a popular 3 Series choice over the years, and deservedly so. It’s tempting to plump for the 282bhp 3.0-litre 330d – with a 0-62mph time of 5.5sec (5.2 in four-wheel drive xDrive form), it's certainly quick. However, our favourite diesel engine is actually the cheaper 320d. This 187bhp 2.0-litre diesel is more than nippy enough, hitting 62mph from a standstill in just over seven seconds. There’s also an entry-level 148bhp 318d, but you have to work it quite hard to make spirited progress.

If you’re not planning on doing massive miles, however, we’d point you in the direction of the truly fantastic 181bhp 320i. This petrol engine is perky enough for most situations, including overtaking on country roads, and its rev-happy nature sits well with the 3 Series Touring’s sporty character. If you need some extra punch, then there’s the more powerful 255bhp 330i, but once you get to that elevated price point, we’d recommend you take a look at the 330e. This plug-in hybrid has similarly brisk performance to the 330i but adds a real-world electric-only range of around 30 miles.

But what if straight-line performance is your main concern? Then check out the range-toppers, both of which have six-cylinder engines: the M340i xDrive petrol, with a salivating 369bhp that chops the 0-62mph sprint down to a blistering 4.6sec; or the grunty M340d diesel, which is only just behind at 4.8sec.

How smoothly the 3 Series Touring rides depends on which suspension setup you choose: the standard system, stiffer M Sport or M Sport adaptive suspension. We’ve yet to sample a 3 Series Touring on its standard steel springs but, if the saloon is anything to go by, it should offer a good balance between comfort and control.

M Sport models have stiffer M Sport suspension, with which you definitely feel every bump as it passes beneath the car. Still, while the ride it provides is definitely on the firm side, body movements are neatly controlled so there's no unwanted body bounce.

Finally, M Sport adaptive suspension is available only on M Sport models as part of the M Sport Pro Package. It’s not cheap, but it allows you to stiffen or soften the springs at the touch of a button. Set to Comfort mode, it helps the 3 Series Touring to smother big bumps with ease while remaining controlled over undulating roads. The Audi A4 Avant is still the comfort king in this class, though. 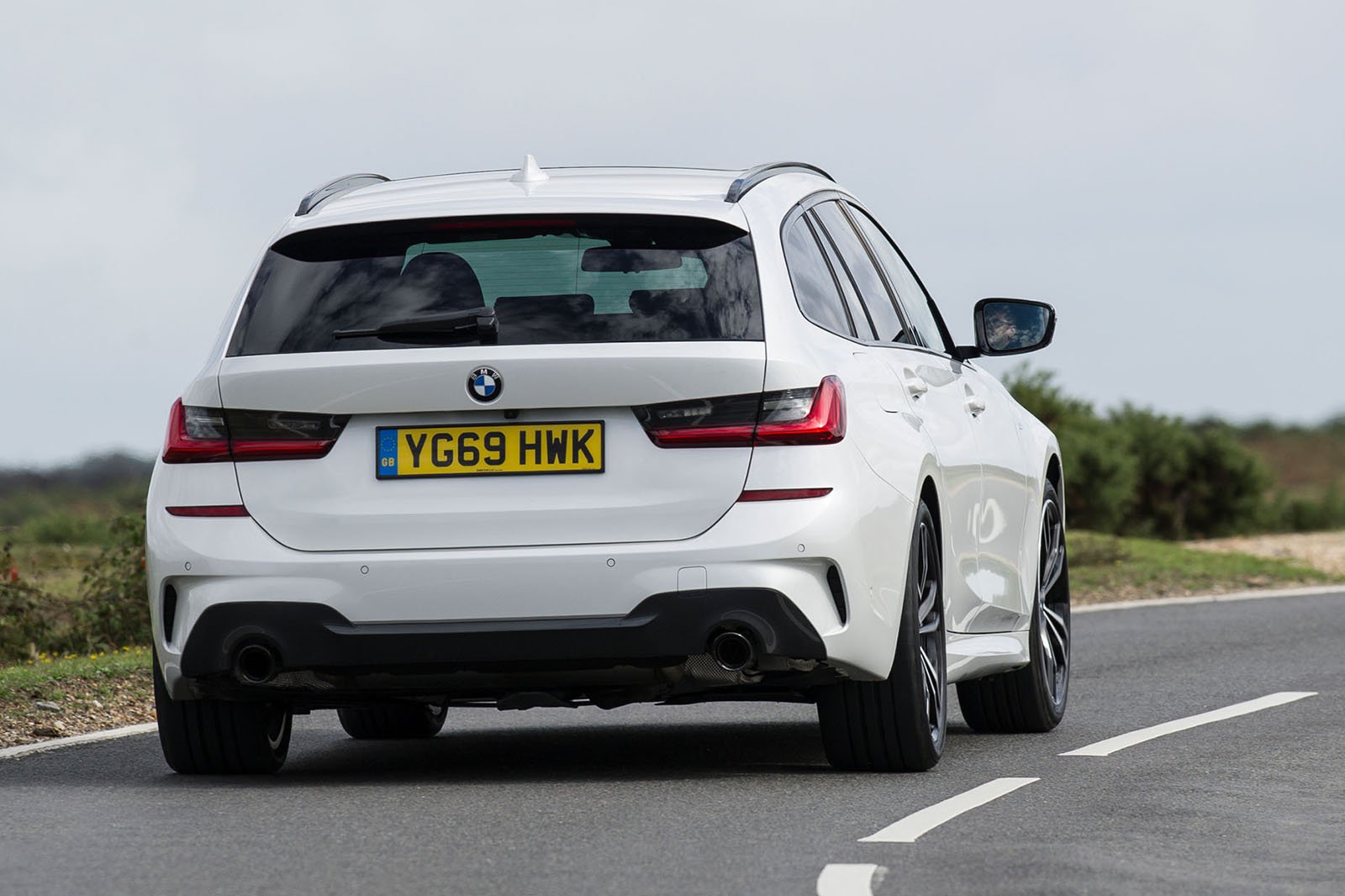 If you enjoy your driving, the 3 Series Touring is a better choice than either the Audi A4 Avant or the Volvo V60. It just feels more alive and agile through corners with little in the way of body lean. That's enough to put a far bigger smile on your face than the other two.

Admittedly, so far we've only tried the Touring on stiffer M Sport suspension and optional M Sport adaptive suspension. We would opt for the latter due to the improvements it brings in ride comfort (see above) but, based on our experience with the 3 Series saloon, we don’t think you would be disappointed if you stick with the standard suspension.

And no matter which suspension you go for, all 3 Series Touring models have brilliant steering. It’s really good at telling you exactly how much grip the front wheels have, helping you to instinctively judge how much steering lock to apply.

Thanks to foam-filled front pillars and a standard acoustic windshield, there’s barely any wind noise at motorway speeds in the 3 Series Touring, although you may hear a faint whistle from the side mirrors when the stereo is muted. We would avoid speccing larger 19in wheels on Sport models as these come with noisy run-flat tyres.

The six-cylinder engines (330d, M340d and M340i) sound sweet, while the less powerful four-cylinder petrols have a gruffer but still perfectly acceptable tone. The big-selling 320d diesel is also fine, but not quite as hushed as the equivalent A4 40 TDI – that said, the 3 Series’ automatic gearboxes are much quicker to react than the equivalent ‘boxes of the Audi A4 and Volvo V60.

Most 3 Series Touring models have a progressive brake pedal, but the 330e plug-in hybrid’s feels a bit weird; that’s because it activates a regenerative braking system that harvests energy to top up the battery. Still, It's more confidence-inspiring than the brakes of many other hybrid cars. Also on the plus side, you get no engine noise when the 330e is running on electric power alone.