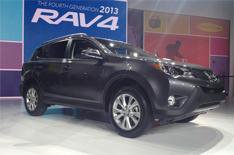 The Los Angeles Auto Show is usually one of the more relaxed motor shows of the year - relatively compact, firmly rooted in America's holiday season and of ever-decreasing importance in the face of rival events in Shanghai, Beijing and even Moscow. It's not even the biggest car show in the US; Detroit has fought back in recent years to hold on to that particular tag.

Even taking all of that into account, though, this year's LA event was remarkably low-key. There were few global unveilings, let alone debuts of mainstream products that we'll all purchase - and only a few of the major brands wheeled out concepts cars. The majority of the stand activity felt like major manufacturers ticking off the box marked 'United States' on cars we already know, such as the Fiat 500L and Ford Fiesta.

Still, there was a smattering of genuinely new metal - enough to remind you that California is a huge market on its own, particularly for some of the premium brands. Here are our show stars.

Porsche Cayman
The new Porsche Cayman is easily one of the most eagerly anticipated driver's cars of 2013 - but it got its global launch in Porsche's standalone hall at Los Angeles. The mid-engined two-seater builds on the styling cues introduced on its sister car, the Boxster, earlier this year, but gets a more distinctive sloping tail. It's a dramatic look that works; the bright yellow show car looked stunning, and while the new Cayman is a little bigger than the current one, that extra length doesn't harm its proportions at all.

The Cayman stands every chance of backing that promise up on the road, too. Its 2.7-litre flat-six engine produces 271bhp and 214lb ft of torque, allowing the 'entry-level' car to hit 62mph in well under six seconds. The hotter 'S' variant gets a 3.4-litre engine with 321bhp and 273lb ft. It cracks 0-62mph in 5.0 seconds, although if you choose Porsche's dual-clutch PDK transmission then that time goes down to 4.7 seconds. The top speed of the S model is 176mph; Porsche's 'sub-911' model really does border on supercar pace now.

None of this would matter if Porsche were taking the proverbial on pricing, but it's not. Regular Caymans will start at 39,694, and the Cayman S will cost from 48,783. Those aren't small numbers but even so, if the Cayman builds on the Boxster's ability, then it has the potential to be an absolute performance bargain.
Read more on the Porsche Cayman

Toyota RAV4
The new Toyota RAV4 is the fourth generation of the SUV and gets sharper styling - particularly at the front end, where it adopts some cues from the recently launched Auris.

Inside, the model on show - in a top-end trim level, admittedly - had a cabin with a more coherent finish than we've seen on many recent Toyotas. The technique of double-stitched leather on the multi-layered fascia was pretty effective, and even the infotainment screen looked more integrated than usual.

Practicality looks to be improved; there's plenty of headroom in the rear (although legroom could be tight if the front passengers are six-footers) and the square-shaped boot has an admirably low loading lip.

The big news for UK buyers is the arrival of a 2.0-litre diesel RAV4 that's only front-wheel drive. The 122bhp engine gets stop-start and a six-speed manual gearbox as standard, so if you're willing to put up with only two driven wheels, you can have a RAV4 with CO2 emissions of just 127g/km.

Other models include a 2.2-litre diesel with 148bhp and either a six-speed manual or six-speed automatic transmission, and four-wheel drive. There's also a new Sport mode that claims to be more rewarding to drive by diverting more power to the rear wheels to avoid understeer.

We'll have to wait until early 2013 to see if this makes a big difference to the RAV4's driving experience - although the order books open in December.
Read more on the Toyota RAV4

Jaguar XFR-S
The Jaguar XFR-S is the British manufacturer's most hardcore performance saloon to date - and it certainly stood out on the company's Los Angeles show stand. Indeed, the mean-looking bright blue machine did an alarmingly good job of vying for attention with the orange F-type that was sitting beside it.

The XFR-S uses the same 543bhp 5.0-litre supercharged V8 engine as the XKR-S coupe and can reach 62mph from rest in just 4.6sec. Unlike the regular BMW M5-rivalling XFR, the XFR-S gets a version of the same eight-speed automatic transmission that will feature in the F-type. The new set-up is called Quickshift and Jaguar claims it offers faster, smoother gearchanges.

The new car gets a host of chassis tweaks, including firmer shock absorbers, and a range of bodywork modifications to reduce lift at high speeds. A choice of rear spoilers will be offered; we'd expect most customers to stick with the default choice, since it's the larger one.

At 79,995, more than 14,000 more than the XFR, and with a very focused driving experience, the XFR-S is likely to sell in very small numbers. However, with the strengths of Jaguar's UK chassis tuning team behind it, it remains one of 2013's more enticing prospects.
Read more on the Jaguar XFR-S

Volkswagen Beetle Cabriolet
The VW Beetle continues to split opinion - which is probably its raison d'etre. This is, after all, a car that doesn't really score on driving experience or practicality; you choose it because you identify with it as a highly stylised tribute to the iconic original. As such, it will always have appeal to some - and be Marmite to others.

The drop-top version has always been a part of the Beetle story, and LA is a great place to own a convertible - so sure enough, the Beetle Cabriolet made its public debut here, more than six months before it'll arrive in UK dealers.

It's a reasonably neat execution, because while the hood is still visible when lowered, it's compact enough to not ruin the car's side profile. The roof is electrically operated, can work at speeds of up to 31mph and will lower in less than 10 seconds. An active roll bar system protects the occupants; it'll pop up from behind the rear seats in fractions of a second if it detects the car is about to flip.

If anything, the Cabriolet does have a little more of a sense of fun about it than the regular hatchback, which looks disappointingly normal (particularly inside) in its latest guise. Driving it is unlikely to be a stellar experience - but if the Beetle Cabriolet can invoke a bit more of the original's spirit, then it could end up being the preferred choice of this modern curio.
Read more on the VW Beetle Cabriolet

Mercedes Ener-G-Force
Mercedes showed the AMG-tuned SLS Black Series supercar, and a designer-influenced version of the Smart Fortwo with stuck-on wings (yes, seriously) - but arguably its most significant launch at Los Angeles was the Ener-G-Force.

The enormous SUV is ostensibly a concept car - although privately, Mercedes sources will admit that the company is evaluating how it can produce a super-luxurious, jumbo SUV to attract wealthy buyers in emerging markets who aren't interested in the classic G-Class.

The Ener-G-Force still builds on the genes of that classic model, though, with a recognisable nod to its front-end styling - particularly around the headlights and grille arrangement - and a squared-off shape that shows through, even under complex surfacing. It also has a number of neat styling touches, including LED headlights in the shape of the letter 'G'.

It is, of course, extremely unlikely to be made in anything near the form shown at LA. However, if the basic styling cues do give us an idea of where Mercedes is thinking of taking its large SUVs, then the Ener-G-Force could go down as a very significant concept, and for positive reasons.
Read more on the Mercedes Ener-G-Force

BMW i3 Concept Coupe
The BMW i3 Concept Coupe is an attempt by the German firm to show that fully electric vehicles can also be sexy. A three-door version of the i3 EV city car that's due on sale by the end of 2013, it gets a slightly lower roofline and a modified version of that car's carbonfibre passenger 'cell'. Interestingly, the concept sits on the real car's high-tech underpinnings.

It's a bit of a stretch to call the i3 a Coupe - although chief designer Benoit Jacob says it is a coupe in terms of 'interior perception' more than exterior styling.

Meanwhile, progress on the regular i3 continues apace. BMW's joint venture factory with SGL Carbon is now up and running in Moses Lake, Washington State, using hydro-electric power that's not only clean but also a sixth of the price of electricity in Germany. In truth, though, the American factory - which takes a Japanese-produced polymer (a by-product of crude oil refinement), and turns it into spools of carbonfibre threads - is only a warm-up act for the really trick technology.

Those processes, under development at a factory in Wackersdorf, Germany, will turn the raw material into a rigid safety cell that surrounds and protects the passengers in the car, while weighing considerably less than even an aluminium equivalent.

Can BMW make it happen and still sell it at a reasonable price? It clearly thinks so - and the i3 Concept Coupe was a bullish statement on how it sees its EV range expanding after the regular car launches in 2013.
Read more on the BMW i3 Concept Coupe