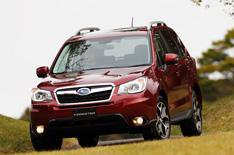 This the 2013 Subaru Forester, which is due on sale in the UK next summer.

The all-new Forester gets new bodywork that gives it a sharper and more modern appearance than the current car.

A chunkier front end, with more angular headlights and a large front grille give the Forester a bolder look.

Although the new Forester's overall shape is similar to the current car's, it has a distinctive new 'shoulder' line along its sides, pronounced wheelarches and more sculpted tailgate and rear lights.

Full technical specifications are yet to be revealed, but Subaru has confirmed that all Foresters will have four-wheel drive.

All new Subaru Forester models have four-wheel drive as standard

Prices are yet to be confirmed, but we'd expect a small increase over the current model, which costs between 23,120 and 30,820.