The addition of an electric motor and battery pack make for impressive numbers, but the Audi Q7 E-Tron has limited appeal... 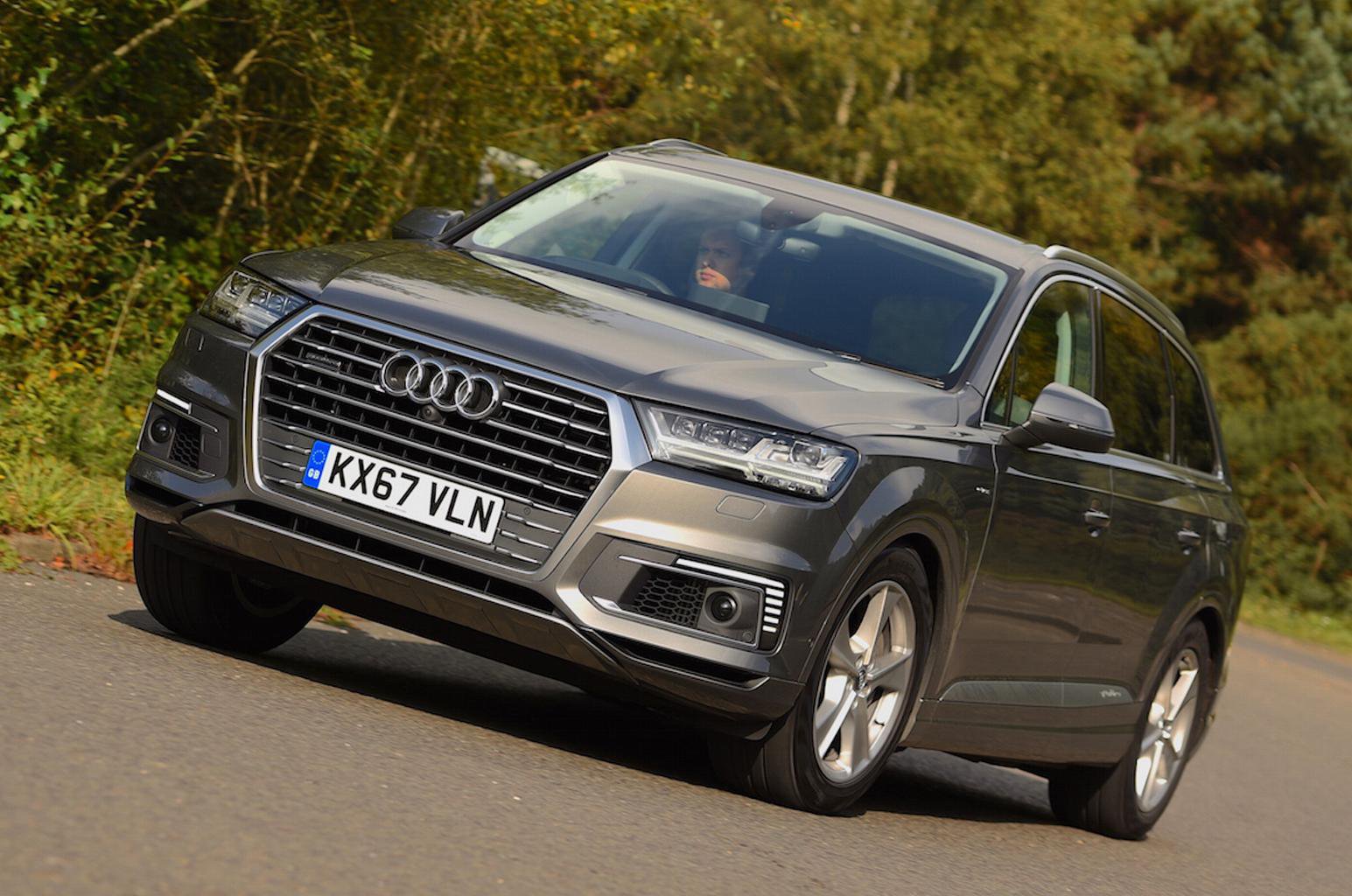 The past few years have seen the plug-in hybrid become increasingly popular, especially with those running a company car. Thanks to their ability to run on electric power for extended periods of time, they offer low CO2 emissions that result in cheap company car tax and official average fuel consumption in excess of 100mpg.

Audi already offers the A3 E-Tron plug-in hybrid and, with this new Audi Q7 E-Tron, it has extended the range to include a large SUV as well. This pairs a high-efficiency version of the normal Q7’s 3.0-litre diesel with a battery pack that’s large enough to provide an electric-only range of 34 miles.

With a full charge, the Q7 E-Tron has an official average fuel economy figure of 156.9mpg and CO2 emissions of just 48g/km. Both figures beat similar models from Volvo, BMW, Porsche and the cheaper Mitsubishi Outlander PHEV.

Although the E-Tron has been on sale in Europe for a while, we've had to wait for it to reach the UK after supply problems regarding parts for right-hand drive models. So, now it's here, it's time to see how it fares in the real world. 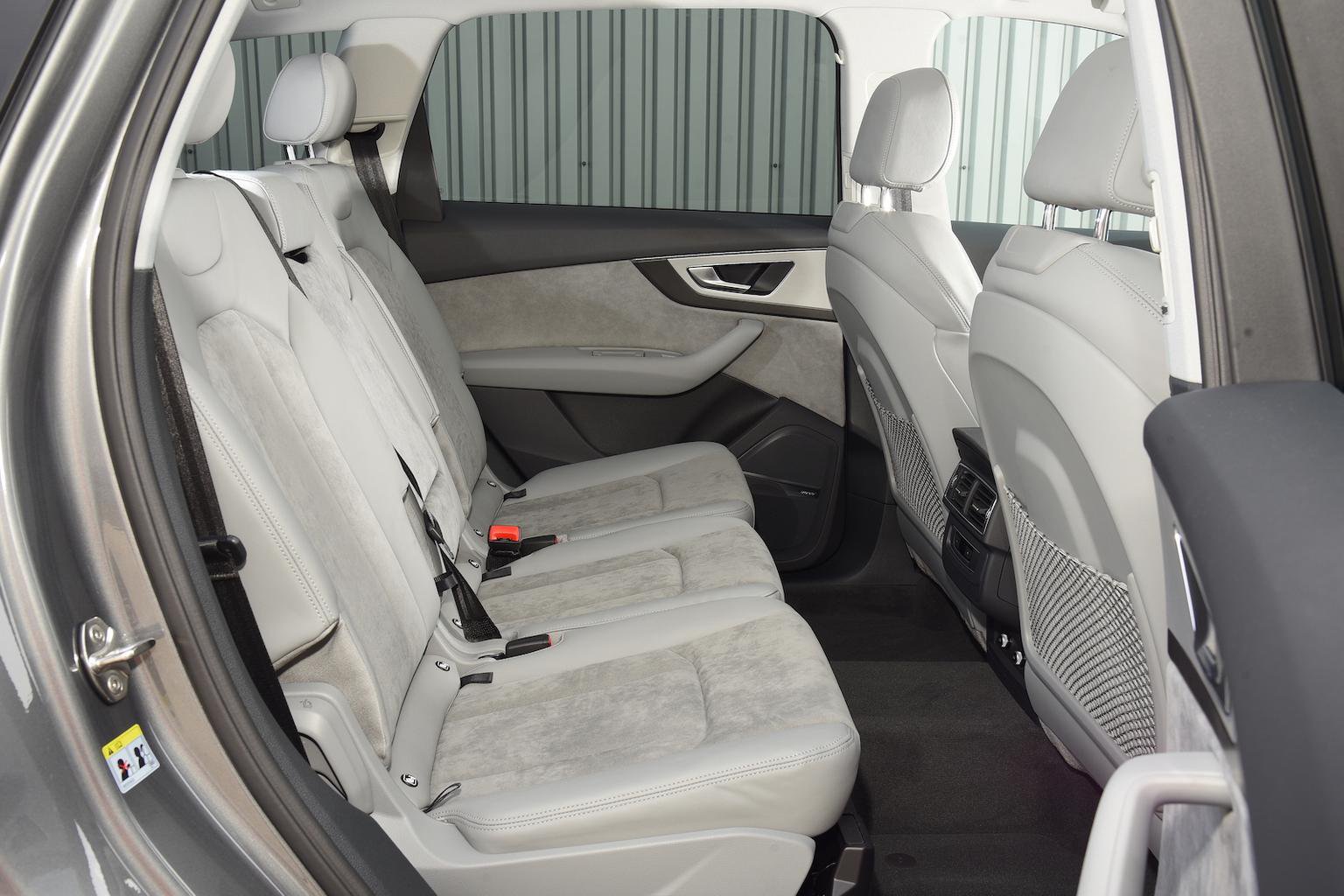 As long as you’ve got charge in the battery pack, the Q7 E-Tron will almost always pull away on electric power alone. It takes a very heavy right foot to get the diesel engine to fire in these circumstances.

To help you maximise your efficiency, the accelerator pedal can provide feedback to help you keep the car running in electric mode for as long as possible. As you put your foot down, you’ll feel resistance at a certain point in the pedal's travel; avoid pushing past this and the engine will remain off.

This isn’t a fixed point, though. Depending on your speed and the battery's charge, the resistance could be anywhere in the throttle’s travel. But that’s not all the throttle does. It can also send a pulse through your foot, prompting you to lift off and coast to gain even more efficient running; this feels odd at first, but you do get used to it.

Should you run out of charge or need to go faster, the V6 diesel is impressively refined. It fires with barely any noise or vibration and smoothly adds power to the drivetrain. Even when pushed towards the top of the rev range, the engine remains smooth, with none of the traditional clatter you might expect from a diesel unit.

It’s fast, too. With both power sources giving their all, the Q7 E-Tron has performance that would embarrass many a hot hatch. The electric motor really helps here, with the instant nature of its power delivery ensuring that no matter what gear you’re in, acceleration is immediate. Standard-fit quattro four-wheel drive makes sure none of this power is wasted, giving you excellent traction even on slippery surfaces. Our only criticism is that the regenerative braking delivers a less progressive middle pedal, making it trickier to come to a smooth stop.

The Q7 has never felt particularly sharp in bends and the E-Tron is no different. If anything, the additional weight of the batteries makes it feel slightly more ponderous and less keen to change direction. But it is easy enough to place on the road thanks to precise, if slightly numb-feeling, steering.

That said, what the standard Q7 loses in outright handling, it makes up for in ride comfort. Specify optional air suspension and the Q7 transforms into not only the best-riding car in its class but also one of the best-riding cars full stop, including top-end luxury limos.

Unfortunately, even with the aforementioned air suspension fitted (at a cost of £2000), the E-Tron can’t quite match the standard Q7’s magic carpet-like ride. At higher speeds, the E-Tron rides long-wave undulations remarkably well, but once into an urban environment, you can feel that the suspension is having to work quite a bit harder to contain the batteries’ extra mass.

As a result, more surface imperfections are transmitted up through to your seat, while sharp-edged intrusions send the odd mild thud through the cabin. That said, it’s still more comfortable than rivals such as the Volvo XC90 T8 and BMW X5 xDrive40e, but we’d recommend specifying the smaller standard-fit 19in wheels to optimise the ride.

Like all plug-in hybrids, you need a fully charged battery to get anywhere near Audi's lofty fuel economy claims. With around a quarter charge, we saw indicated fuel economy on the trip computer tumble from about 70mpg down to less than 40mpg, which is roughly what you’d get from a regular Q7. 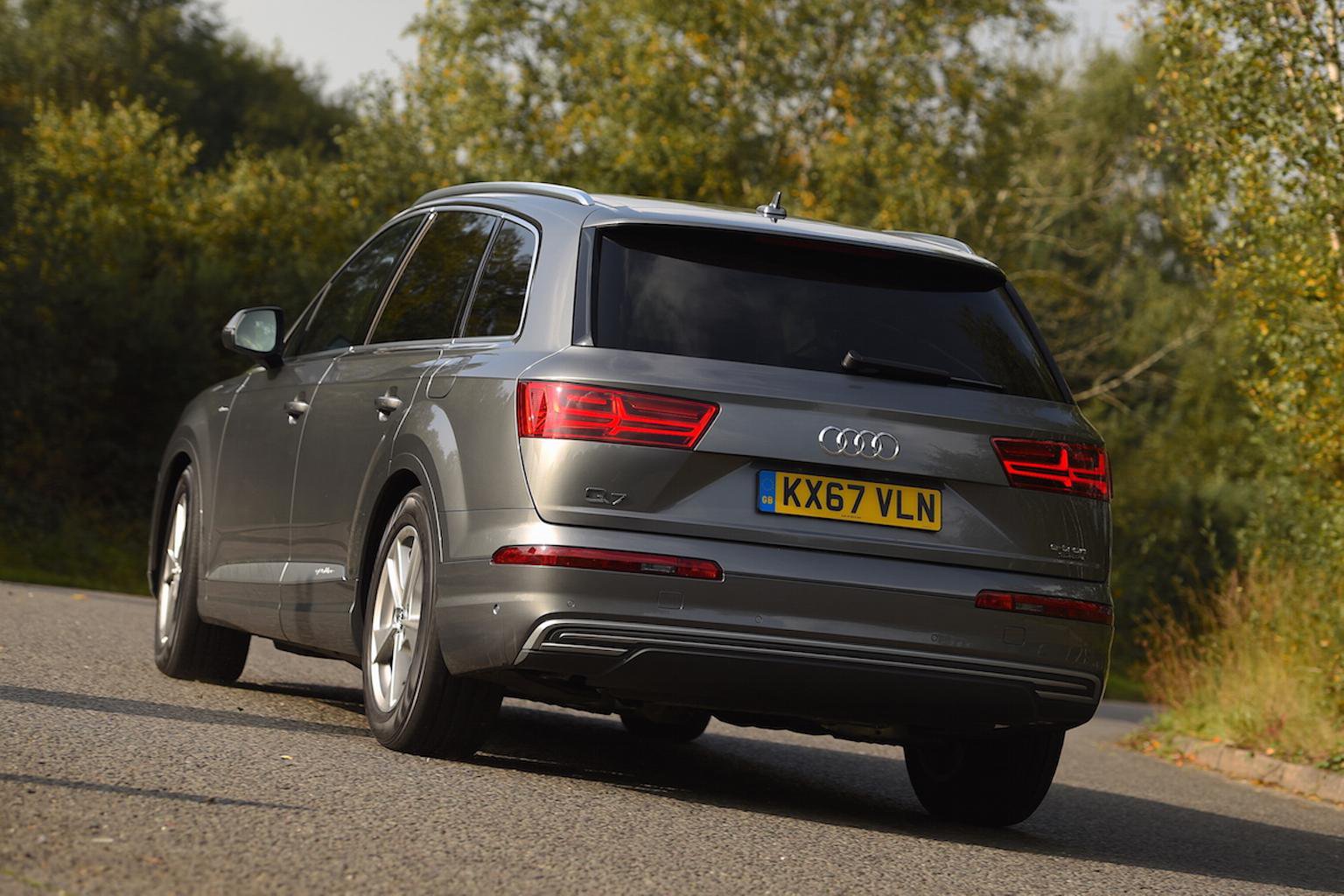 At first glance, the E-Tron’s interior looks very similar to any other Q7 model. Standard kit includes a powered tailgate and Audi’s digital Virtual Cockpit, which sits in place of the conventional analogue instruments behind the steering wheel and displays lots of useful information on the 12.3in TFT screen.

Look closer and you’ll notice a secondary fuel gauge for electricity and hybrid-specific screens in the infotainment system. The rest of the dash is identical to the regular Q7, which means a clutter-free environment hewn from high-quality materials. It really is a great place to be.

Move to the boot and things change significantly. The big battery pack sits under the boot floor, meaning you lose the third row of seats and, with it, Q7’s ability to seat seven. Even worse, boot capacity is reduced by 120 litres due to the higher floor. To be fair, though, the remaining space is more than enough for a couple of large pushchairs or luggage for a family holiday.