The Volkswagen ID.4 is a large electric SUV which can travel for up to 323 miles on a single charge...

What do the films Aliens and The Dark Knight have in common? They’re all sequels which were received better by customers and critics than the original films, and represent exactly the kind of success Volkswagen is hoping for with its new ID.4 electric large SUV.

You see, the ID.3 family hatchback has been a big hit. As the first car to come from Volkswagen’s ID sub-brand of all-electric cars, expectations were high when the ID.3 was revealed late last year. Indeed, What Car? readers rated it as one of 2020’s most exciting new cars, and with a credible four-star road test rating now under its belt, Volkswagen has proven its concept. And so we come to the ID 4. 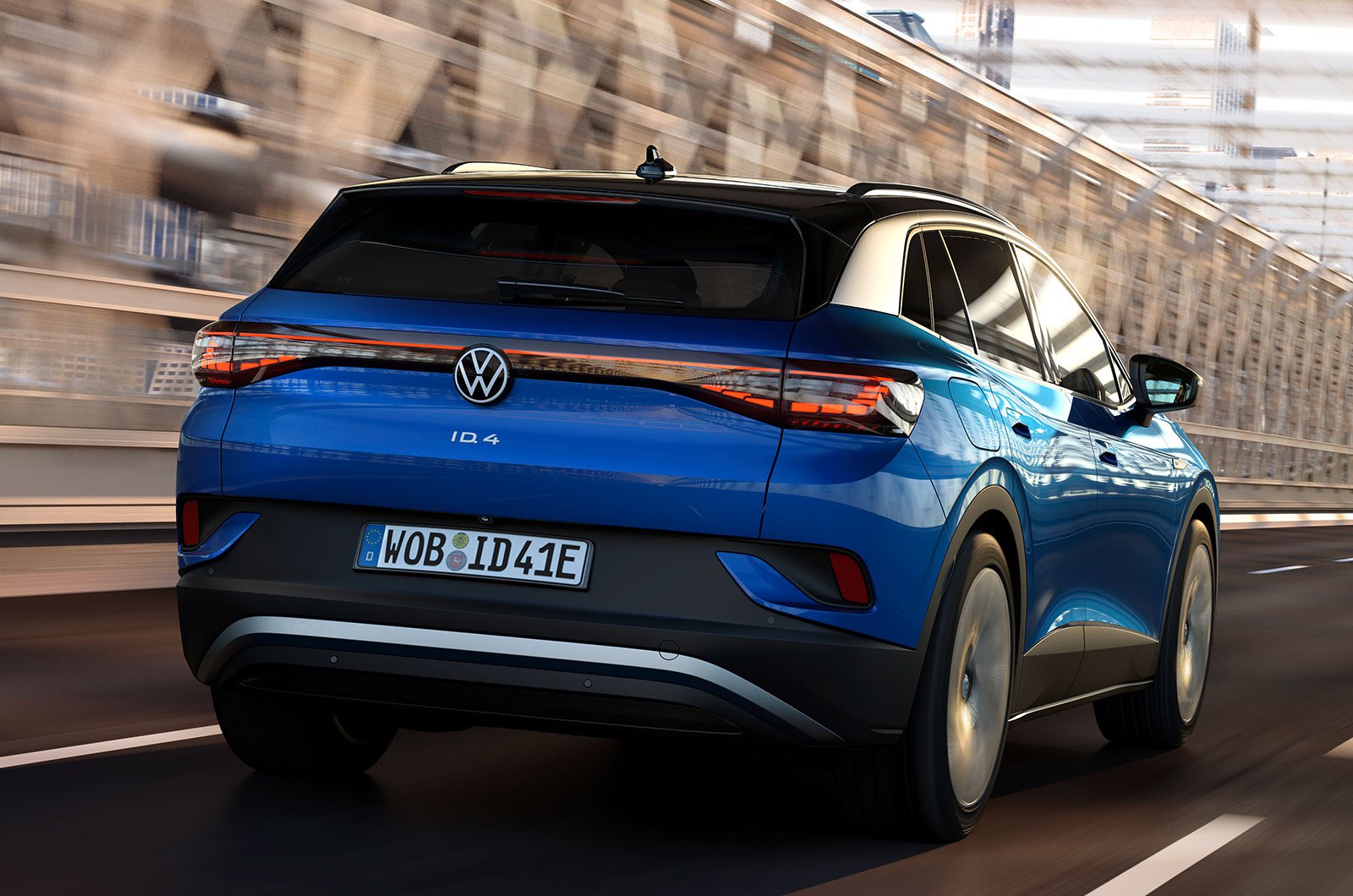 Counting the upcoming Skoda Enyaq and Ford Mustang Mach-E among its key rivals, the ID.4 echoes the smaller ID.3’s design by having no conventional front grille and a thin LED light strip that runs across the width of the car. It sits on alloy wheels of up to 21in, while plastic body cladding around the lower edges of the car give the ID.4 a muscular look. Dynamic indicator lights feature at the back, while the headlights greet the driver by swivelling their lenses to create a small light show. Although its looks have been toned down on its journey to production, there are still clear hints back to the original ID Crozz concept car that was greeted with such enthusiasm by fans in 2017.

At the moment, buyers can choose only the high-spec 1st Edition model, which features roof rails and a towing bracket; the ID.4 can tow a caravan or trailer weighing up to 1000kg. Both range-topping and cheaper trim levels will follow in time, giving buyers more choice. 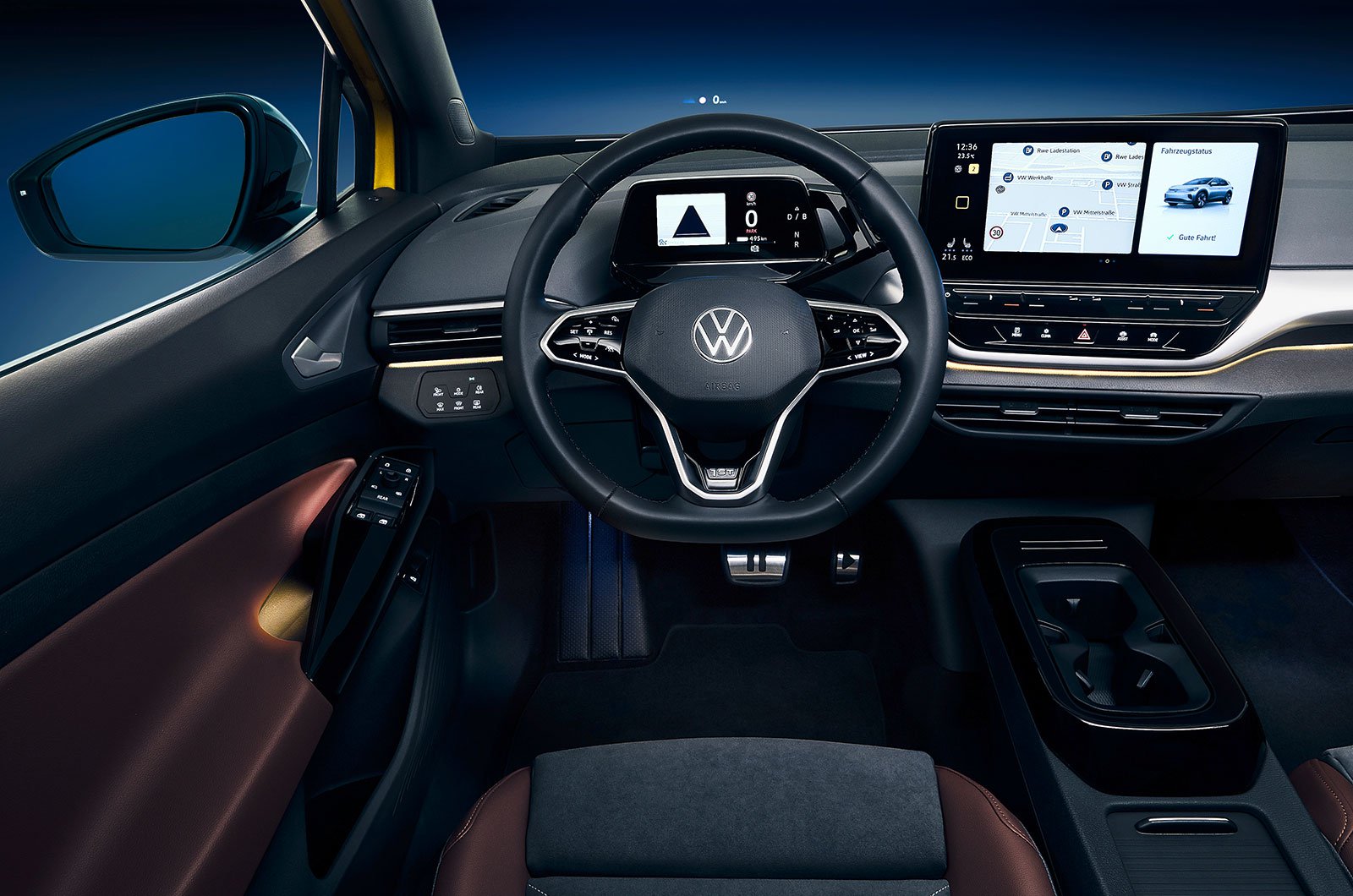 Powering the ID.4 is a single 201bhp electric motor driving the rear wheels, allowing the car to sprint to 62mph in 8.5sec and on to a limited top speed of 99mph. Power comes from a 99kWh battery, providing the ID.4 with an official range of 323 miles. That’s farther than the Enyaq can travel on a single charge, and also farther than more expensive rivals such as the Mercedes EQC and Audi E-tron. In fact, it’s even more than the seven-seat Tesla Model X can manage. In terms of electric SUVs, only the Mustang Mach-E can go farther, with a range of up to 370 miles.

Volkswagen says that thanks to 21cm of ground clearance, light off-road terrain, such as a field or track, should pose no problem to its new SUV.

As with the ID.3, versions of the ID.4 with more power, dual motors and four-wheel drive are already waiting in the wings to join the range in 2021. In range-topping GTX form, the ID.4 should develop 302bhp.

The ID.4 has a turning circle of just 10.2 metres, meaning manoeuvring this large SUV around tight urban streets should be a doddle. 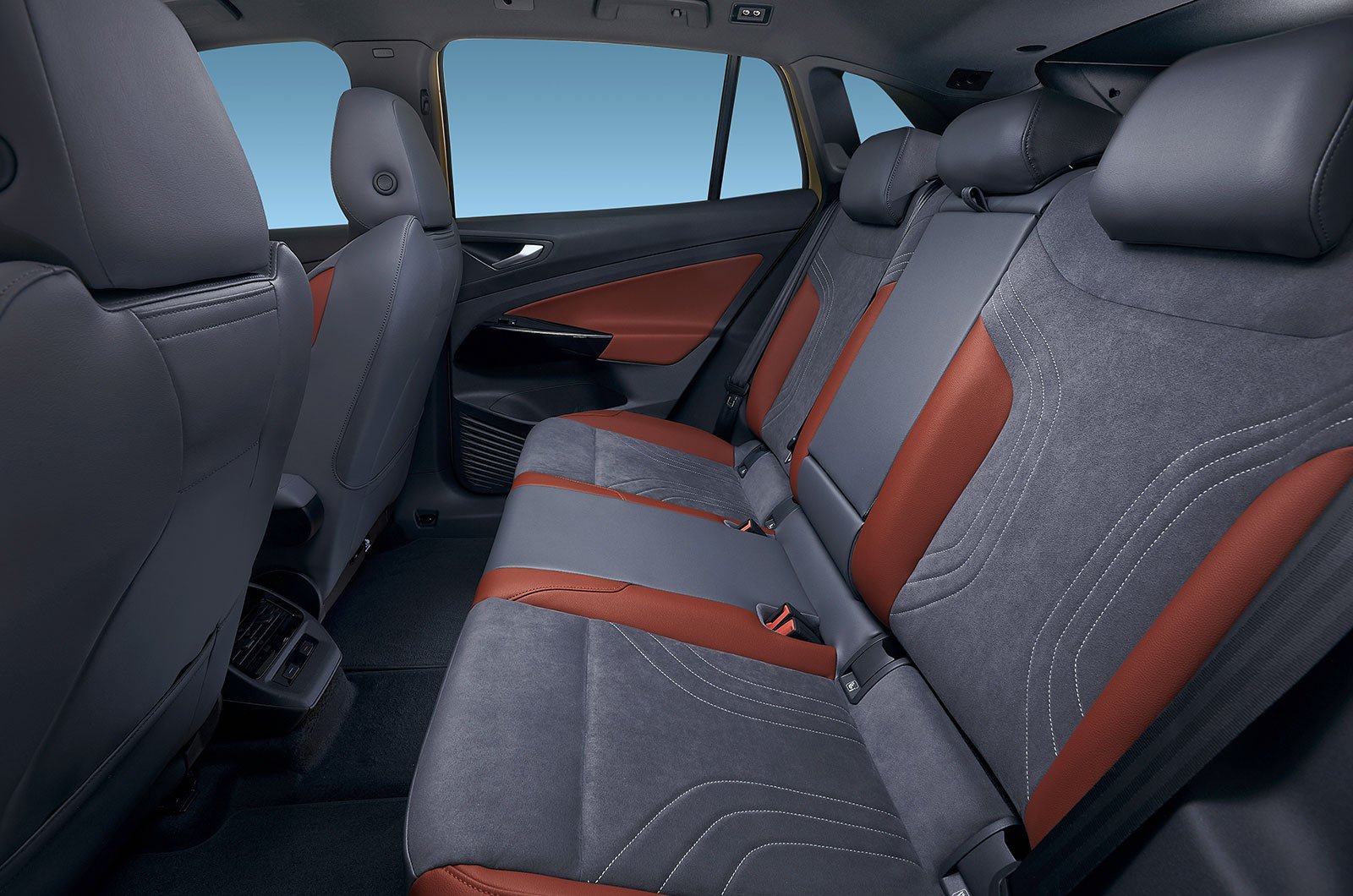 Inside, the ID.4 does without any buttons on its centre console. Instead, everything is controlled either through touch-sensitive icons or the central infotainment touchscreen, which measures 10.0in. While this system looks swish, our real-world tests have already shown that using a touchscreen can be more distracting than a system controlled with traditional knobs and dials. And our first impressions of the system in the ID.3 haven’t been positive; although it looks snazzy, the screen can be slow to respond to inputs and the menus are laid out in a confusing manner.

That said, users can carry out most functions by talking to the car, because the ID.4 can understand natural speech and can be woken up simply by saying ‘Hello ID’. Drivers can connect their smartphones using Apple CarPlay and Android Auto, too. And as with the ID.3, it’s likely that you won’t need to visit your dealer to get software updates in future, because those updates can be applied wirelessly over the air.

A second, 5.3in digital instrument cluster puts the most useful figures directly in front of your eyes. There’s no conventional gear selector, either. Instead, you engage drive using a rotary selector perched on the side of the instrument panel, just as you do in the ID.3.

A narrow light strip running underneath the windscreen, called the ID Light, lights up to show drivers when they’re braking or indicating, while an augmented reality head-up display projects useful information such as sat-nav directions onto the windscreen. These models also get electric seat adjustment and even a massage function. There should be no shortage of space for your odds and ends in the ID.4, with two large cupholders on the centre console, a deep cubby between the two front seats and wide door bins.

The boot should have no trouble swallowing a family’s holiday luggage, but the Enyaq can swallow even more than the ID.4. Should you need more space, the rear seats can fold down to create a van-like space. 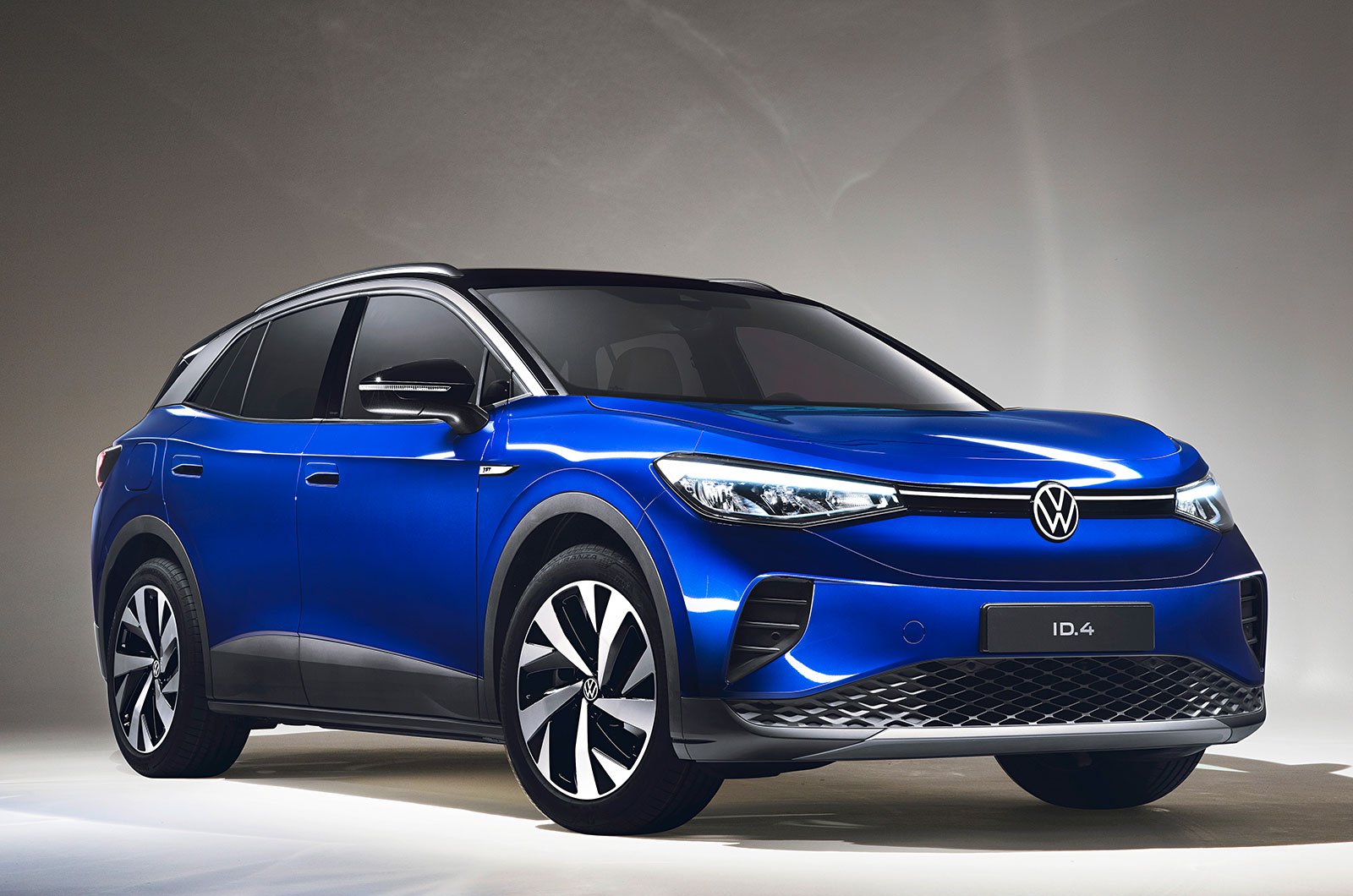 Charging the ID.4 to 80% of capacity takes around 30 minutes using the fastest charging stations, and Volkswagen is even launching its own charging platform called We Charge, giving members access to more than 150,000 charging points across Europe, including the ultra-fast Ionity network, with a single card. Similarly, the brand is selling its own wallbox charging units for buyers to use at home, with a power output of up to 11kW.

Standard assistance features on the ID.4 include font and rear parking sensors with a self-parking function, plus lane-keeping assistance, automatic emergency braking and adaptive cruise control. There’s also a central airbag that deploys between the two front seats in the event of an accident and is designed to stop further injury caused by the driver and front passenger knocking into each other. Efficient driving is encouraged through an Eco Assistance system that tells you when to take your foot off the accelerator pedal. 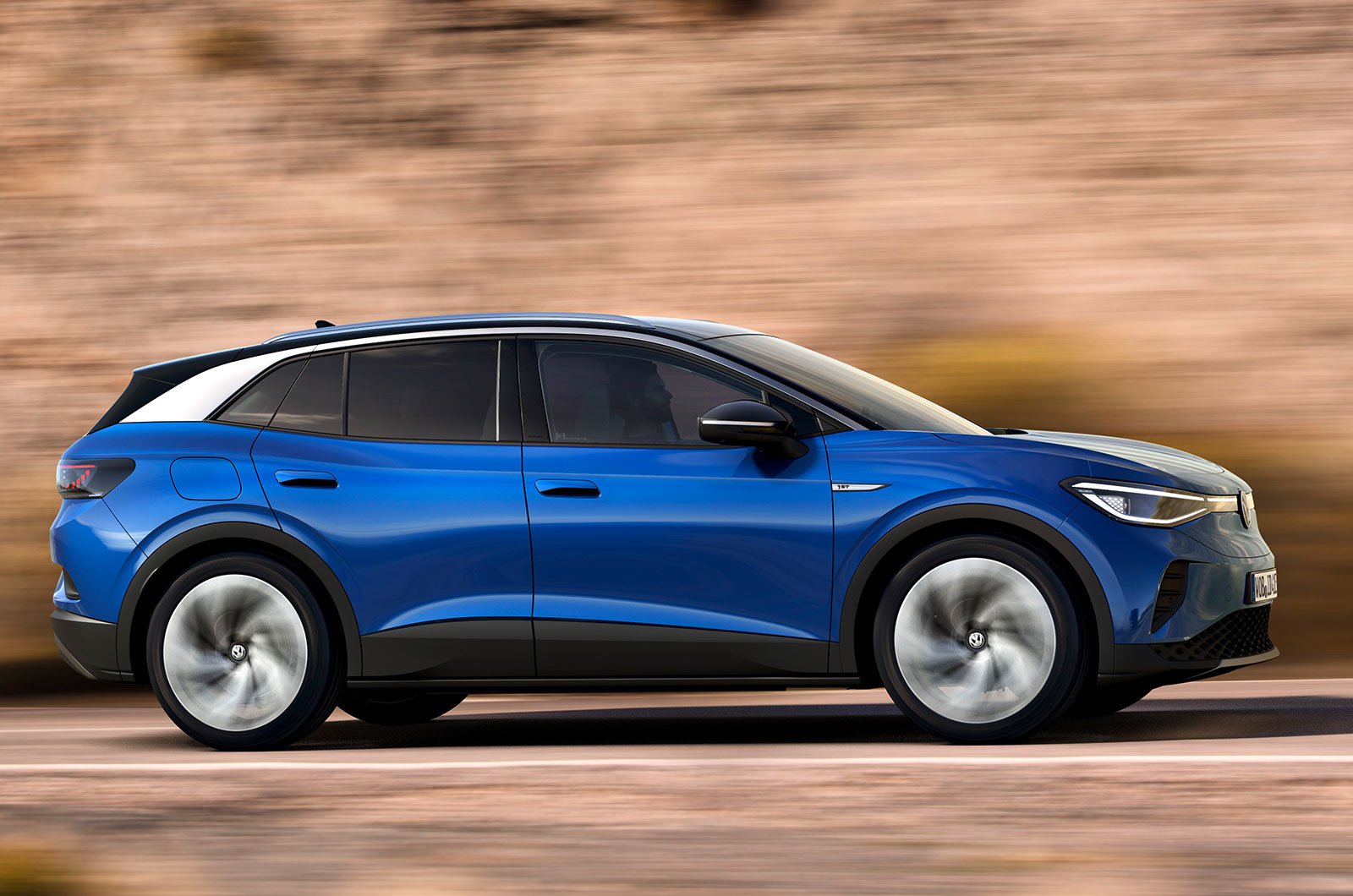 Prices for the ID.4 will start at around £44,000, before taking the Government’s £3000 grant into account for electric vehicles costing less than £50,000. That means the ID.4 will sit in a middle ground between the far cheaper Enyaq and more expensive rivals such as the E-tron and Jaguar I-Pace. 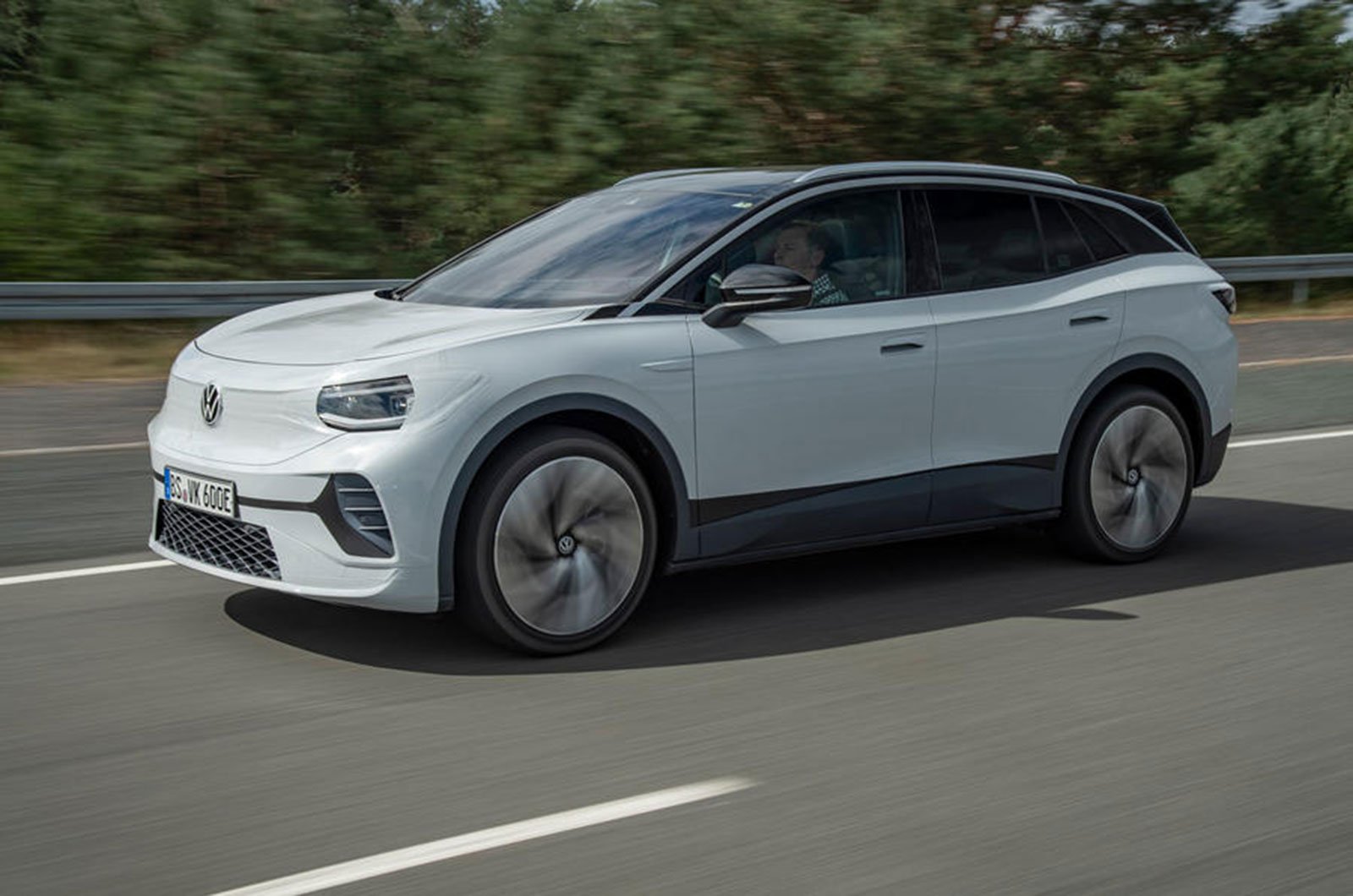 In late-stage prototype form, we found the ID.4 to be responsive and, like most electric vehicles, it had no trouble getting up to speed. That being said, performance on the motorway begins to fade, so overtakes on faster roads won’t feel as lightning fast as they do on city streets. In the standard driving mode, the brake regeneration – which harvests energy as you slow down and feeds it back into the battery – slows the car progressively. In it’s higher setting, the regeneration is strong enough that you can drive the ID.4 using one pedal, which should make cruising around town a smooth experience.

Once you’re cruising along, the most noticeable noise in the ID.4 comes from the tyres, accompanied by some wind noise from around the door mirrors, but on the whole the ID.4 is quiet.

On twisting country roads, we found the ID.4’s steering to be nicely weighted, as well as delivering a surprising amount of feel. And that sharp 10.2m turning circle means that manoeuvrability is outstanding. In short, the ID.4 feels like a far more agile SUV than its dimensions would suggest.

Our prototype featured an adaptive suspension setup that could come to the UK later on in the ID.4’s life, and with this in its Comfort setting, the ID.4 proved to be good at handling lumps and bumps. It didn’t lean much through corners, either, unlike some rival large SUVs.

The ID.4’s interior is a pleasant place to be. The driver’s door opens wide, and you step up into an elevated seat that gives a good view over the road ahead. There’s more room to stretch out than in, say, a Volkswagen Tiguan Allspace, and despite having a high load lip, the boot has a usefully square shape that makes storing a family holiday’s worth of luggage easy.

The new ID.4 is one of 14 cars in contention for the 2021 What Car? Reader Award, which will go to the upcoming model that people are most excited about. You can cast your vote here.

Next: the rest of Volkswagen's ID range of electric cars revealed >>