The Volkswagen ID. Buzz is a spiritual successor to the VW Camper but runs on electric power alone. We've driven a Cargo prototype to see if it's as good as the best electric vans...

Volkswagen’s family of all-electric ID models has been growing very rapidly since the ID. 3 came along in 2019, and is already three models strong, but the newest member of the band might not be a car you’re expecting. The ID. Buzz is technically related to its electric range-mates, but outwardly it’s rather different – even if there’s a slight chance you might think you’ve seen it before.

This ‘car’ is, in fact, a modern, reimagined take on the much-loved Volkswagen ‘Type 2’ van from way back in 1949. The Type 2 was known by all kinds of names, from the VW Camper to the Microbus, or just as the VW Bus for short – and Volkswagen has christened this new version the ID. Buzz in tribute.

While the original Camper was slightly smaller, this new model is a sort of medium-sized utility MPV intended to sit between cars the size of a Citroën Berlingo (which recently went all-electric) and a full-sized Ford Transit Custom. It’s just short enough to fit easily within the bounds of the average parking space, with a roof low enough to make it into a multi-storey car park without any trouble.

Introductory models will be available in Autumn 2022 with a five-seater cabin layout, sliding back seats, and a loadbay of more than 1000 litres with the seats in place (and which extends to a length of some 2.2 metres in the case of the Buzz Cargo).

For now, the car has a battery capacity of 77 usable kilowatt-hours, and will have a WLTP-certified electric range of around 250 miles, which should beat most of its direct rivals. It’s powered by a 201bhp electric motor that drives the rear wheels.

More powerful four-wheel-drive versions of the ID. Buzz will be available later, as will cheaper versions with a bit less battery capacity, long-wheelbase versions with a third row of seats and even more carrying space, and more specialised versions like the original Camper or the bigger VW California. 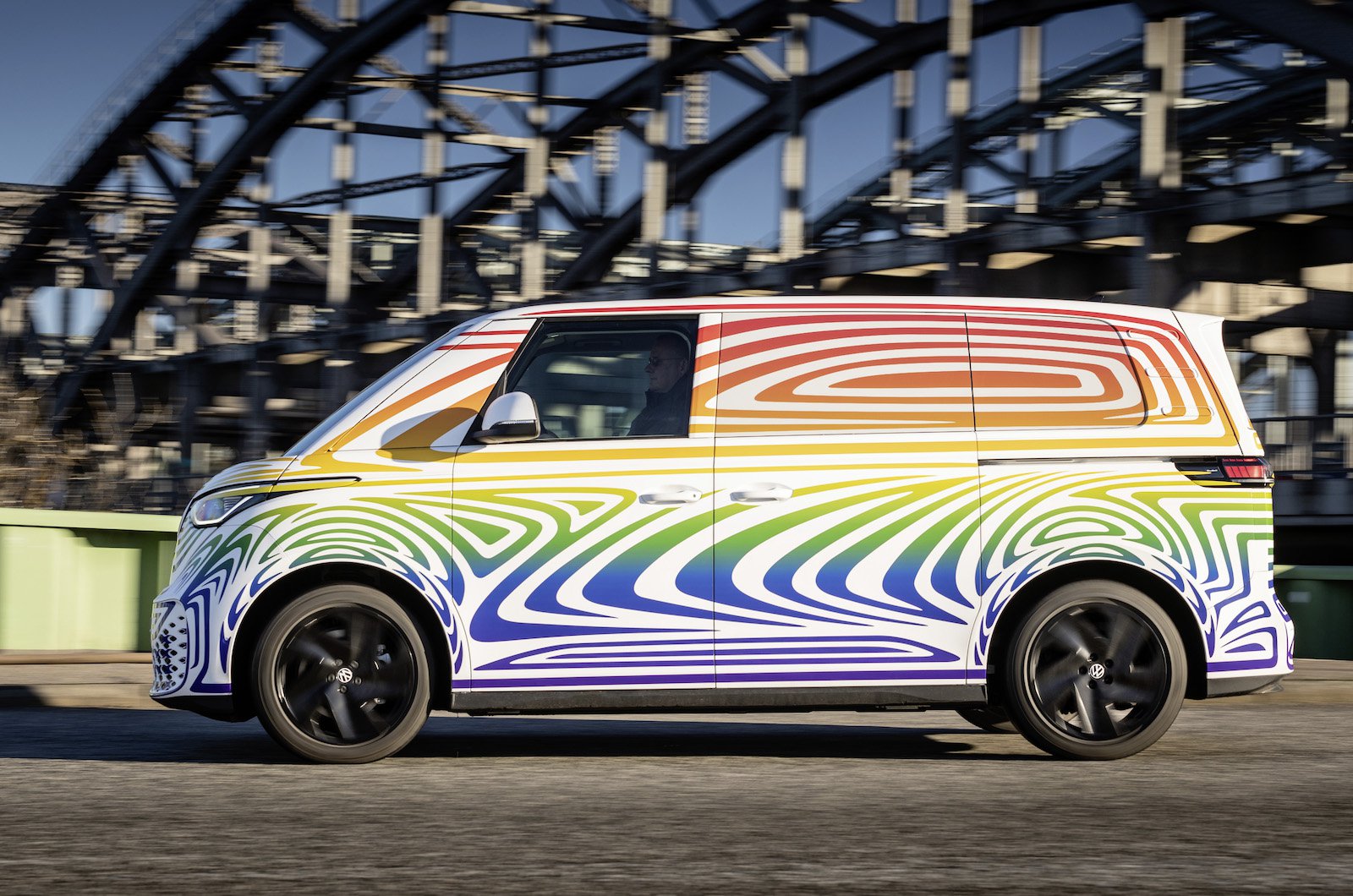 Our first short test in the car came courtesy of a disguised prototype version of the ID. Buzz Cargo van. This can be had with either two or three seats across the front row, and with or without a bulkhead load-bay divider, but we drove it in two-seater form.

Volkswagen hasn’t confirmed what the car will weigh yet, but it feels fairly big and heavy on the road, although it’s smooth, refined and very easy to drive. While it has more power than many electric mono-cab MPVs and vans, its 201bhp isn’t enough to make the ID. Buzz feel particularly quick out of town. It gets up to speed swiftly from crawling pace, though, and is responsive enough to seize any gap you like in a traffic queue.

From 50mph upwards, the car accelerates adequately keenly, and it’s well-mannered too – impressively well-insulated from road noise and wind rustle for something so large and upright. The assertive turn of pace you might expect from an electric passenger car isn’t so evident closer to motorway speeds. 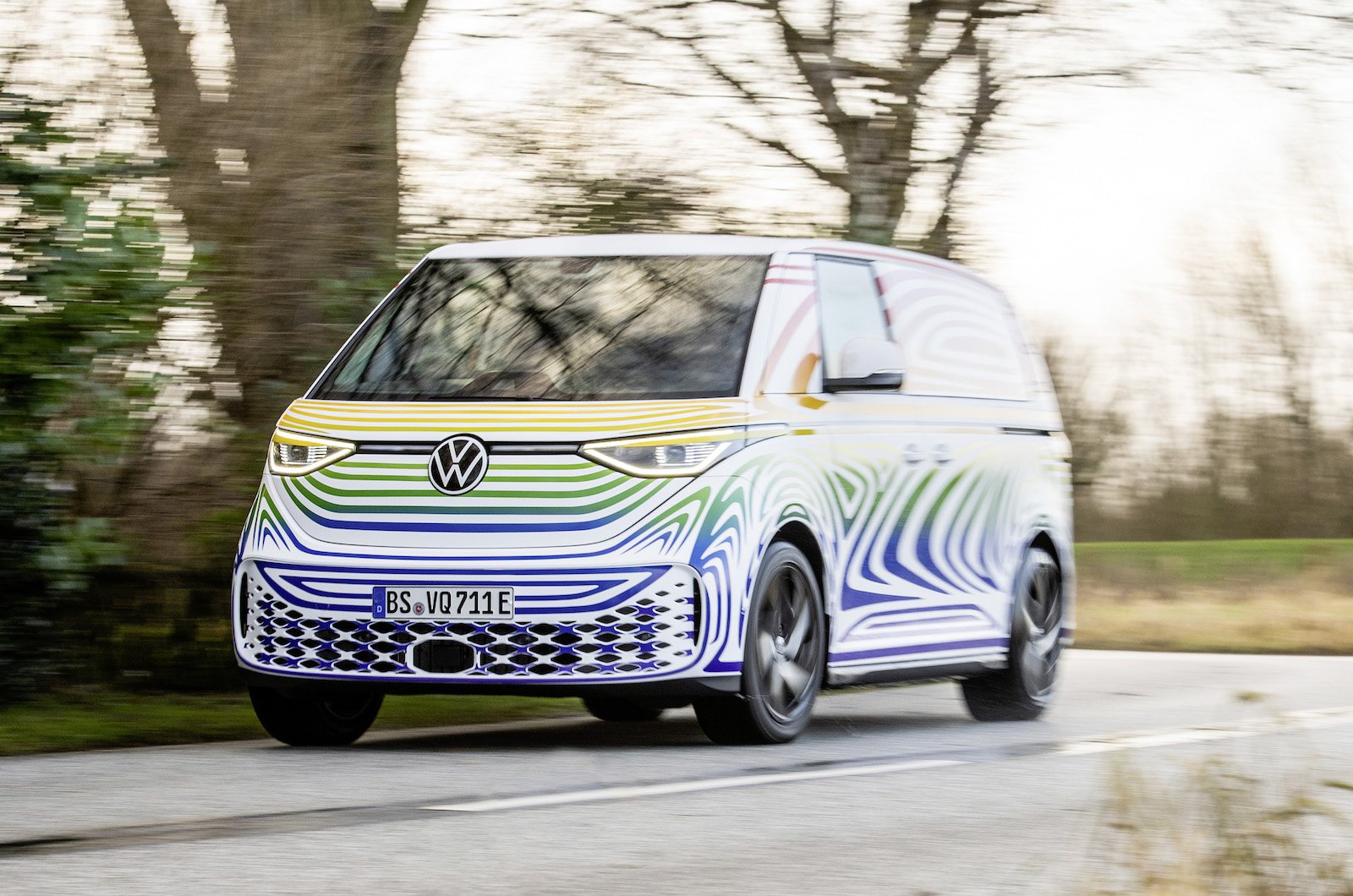 You’re more likely to be taken by this car’s smooth ride, good cruising manners and its wieldiness at low speeds, by van-based MPV standards at any rate, than anything else it does. Like the original VW Type 2 (which used the same underpinnings as the original Beetle), the ID. Buzz is built on a car chassis and suspension, not those of a light commercial vehicle.

You can really tell. Even the Cargo version, which has stiffened rear suspension to support a maximum payload of 600kg, rides bumps gently and without crashing or fussing. It also has light, manageable steering with only moderate directness but consistent weight.

The front wheels are able to turn to greater angles than in most rivals (the electric motor is in the back), so the car turns really tightly when manoeuvring, and is surprisingly easy to park. It has sliding rear passengers doors, too, and can be bought with twin boot doors rather than a hatchback rear end – both of which help to make it seem smaller in confined spaces. 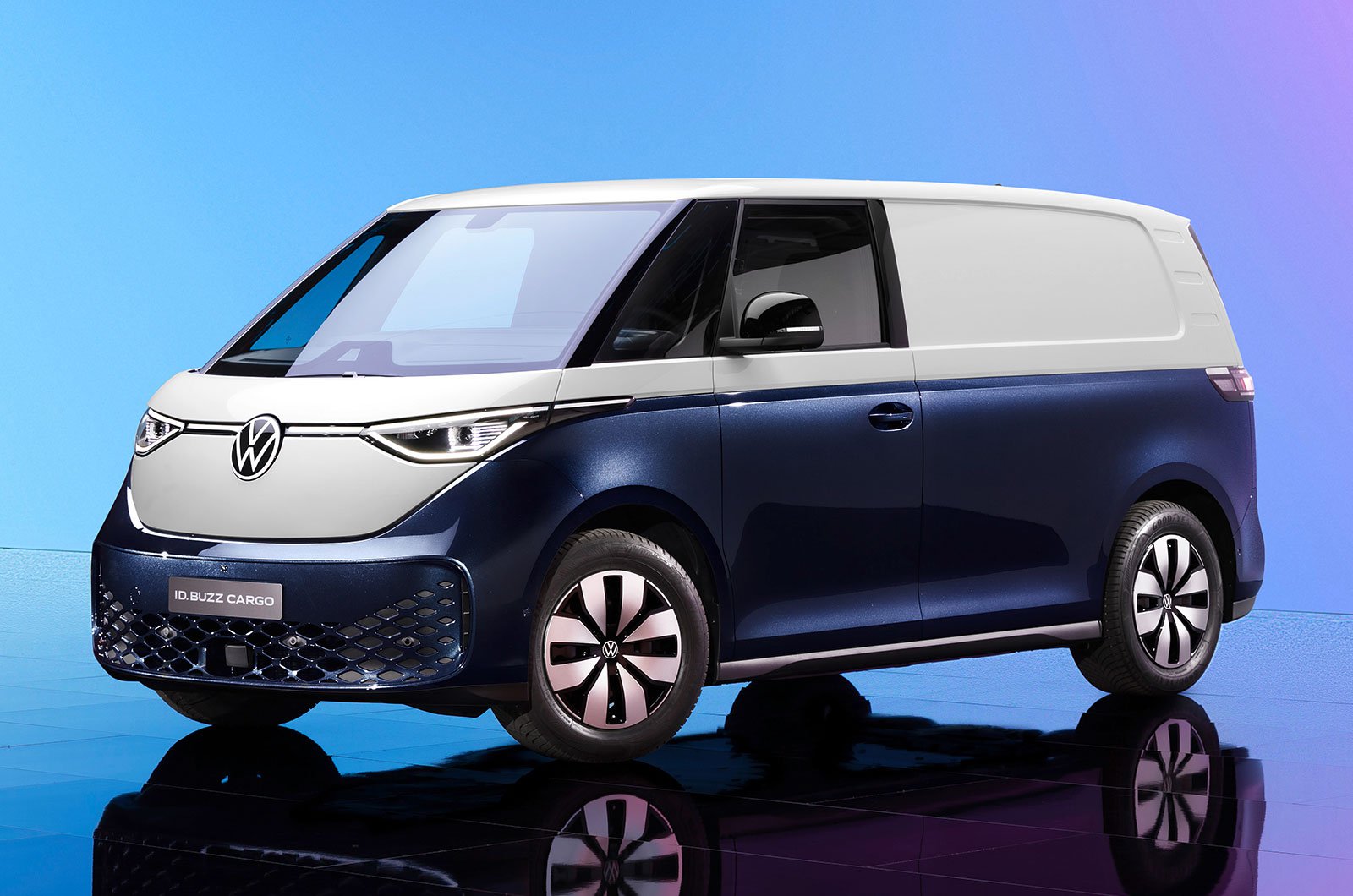 The ID. Buzz is boarded like most medium-sized vans, and will require a step up into the cabin for most drivers. Once you’re in, you’ll find a comfortable driver’s seat with plenty of room around it, and an upright driving position with good forward visibility.

Over-the-shoulder visibility is a lot better if you have the passenger-car version, with its almost full-length glazing, than the Cargo, though. Whichever version you have, judging the length of that very upright front end, which drops away out of sight below the windscreen, is a little bit tricky.

The car’s instruments are all-digital and shared with VW’s other ID models. It’s a smallish but fairly simple and clear arrangement of dials and displays bordered by the car maker's latest-generation touchscreen infotainment system, which works fairly well, but which we know from wider testing also has some distracting usability foibles. 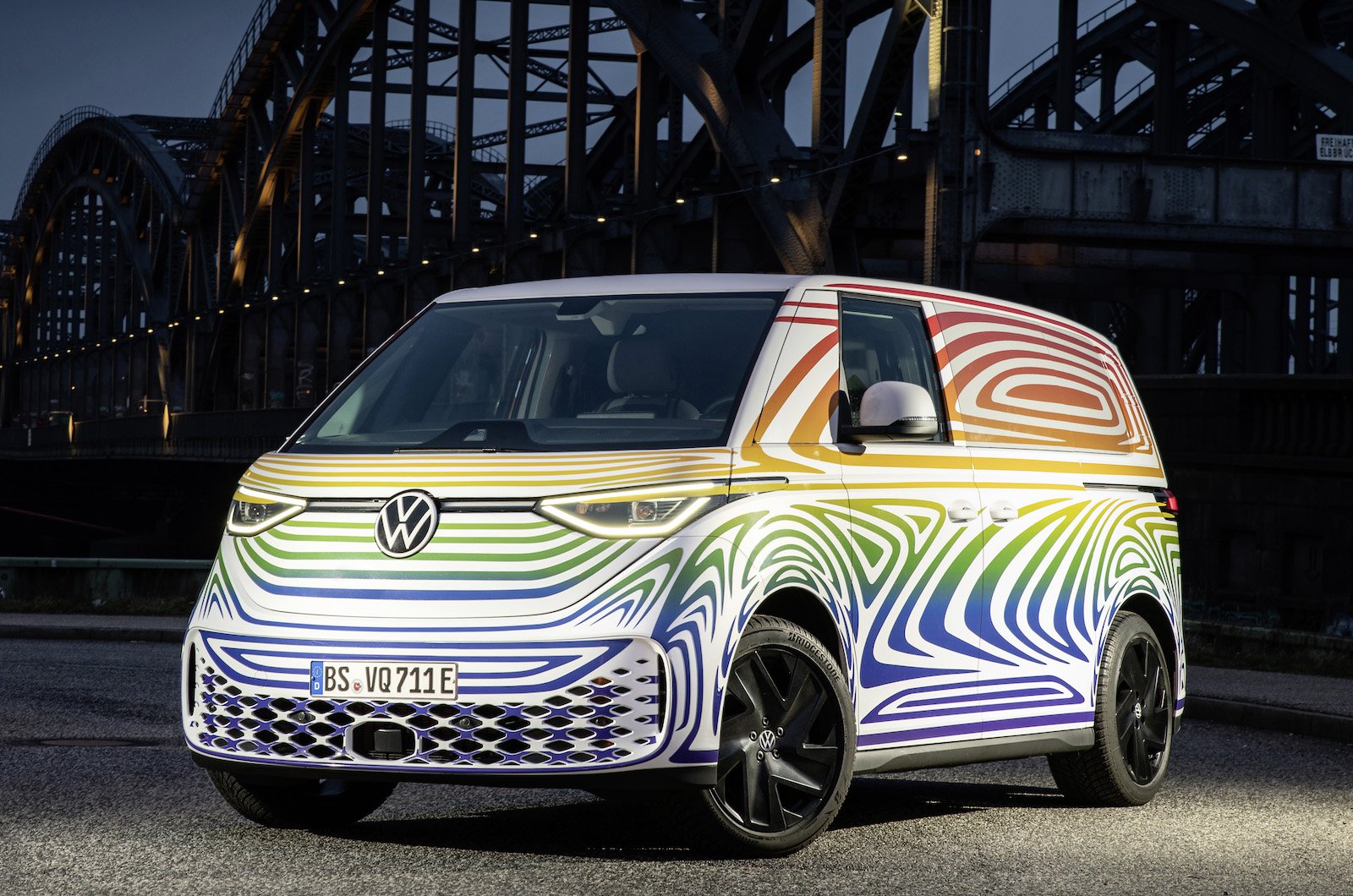 VW hasn’t set equipment levels yet, but says the car will offer wireless device charging, and that passenger versions will offer wired charging ports for up to seven phones or tablets. Appealing ambient lighting design features, and colour and trim combinations you wouldn’t expect on plainer commercial vehicle conversions, are expected to lift the ambience of the interior beyond the ordinary and make it feel more special.

Our prototype test car had disguise over most of its fascia, and wasn’t widely representative of final production specifications in terms of material feel and general consistency of fit and finish. Judgements on interior quality will have to wait until our next test, but this will not be a cheap car – introductory passenger versions will very likely be priced above £50,000 – so quality had better be good.