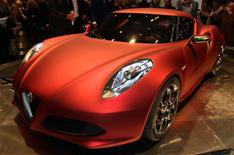 The 4C Concept is a mid-engined, two-seat, rear-wheel-drive coupe that's around four metres long and less than 2.5 metres wide. Alfa says the car's compact dimensions accentuate the car's agility, while its sharp, clean lines give it a distinguished and graceful appearance.

Its launch will coincide with Alfa's return to the US, and the car is seen as a crucial halo model to win over the American market. Contrary to rumour, the car will not be sold as a limited edition, although production capacity is expected to be limited to around 1500 cars a year.

Materials and technology from Alfa's 8C Competizione supercar also find a home in the 4C Concept, with carbon, aluminium and its rear-wheel-drive system all included. The 200bhp 1.7-litre turbocharged petrol engine, its twin-clutch transmission and 'DNA' dynamic control set-up are also donated from other Alfa models, such as the hot Giulietta Quadrifoglio Verde.

The use of carbon and aluminium has helped to significantly cut the car's weight to less than 850kg. This helps the 4C Concept to blast from 0-62mph in less than five seconds - performance that should transfer to the production model.