Powered tyre inflators have come a long way in recent years - but there are still several key differences that separate the very best from the run-of-the-mill. Here are the top 10 on sale...

Powered tyre inflators have improved a lot since those basic old units that were noisy, slow and often inclined to turn into molten lumps of metal if asked to administer more than a couple of pounds of air.

Put simply, they’ve had to up their game. With SUVs becoming ever more popular, inflating large tyres from scratch requires some serious air movement. But which one should you buy? That's where our test comes in.

We kicked off the testing by checking how long each product took to inflate a 205/55/16 tyre – designed to fit a 16in wheel – from flat to 30 PSI. During the inflation process, we evaluated how easy each unit was to use and, in particular, whether the power cable and air hose were long enough for our needs.

A good length air hose is particularly important if you have a vehicle with tall wheels – there’s nothing worse than having to lift and hold up a tyre inflator to connect it to a valve at the top of the wheel because the tubing doesn’t reach to the ground. Cordless models are a definite bonus for fast setting up. 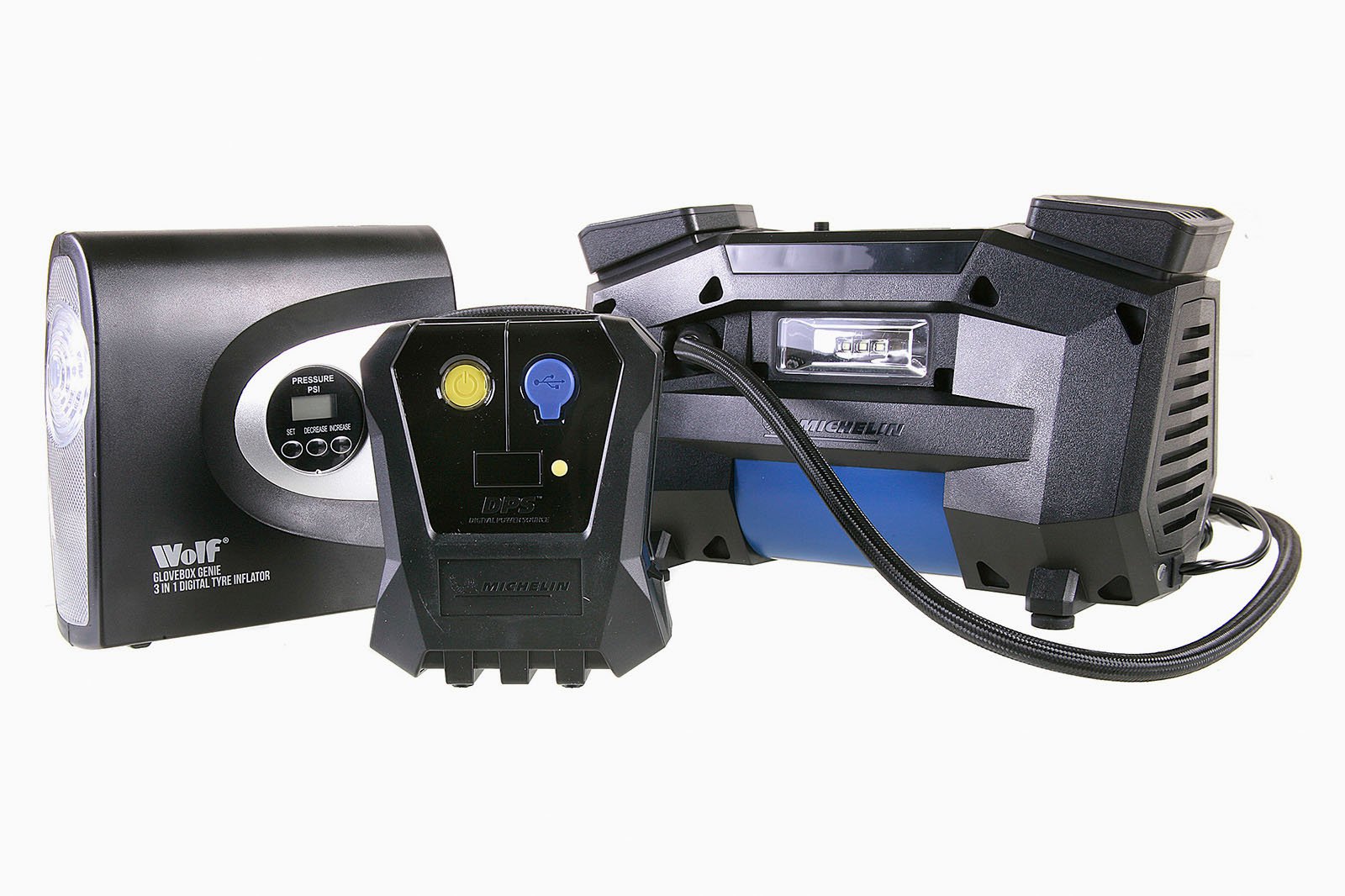 Getting the pressure right is much easier with some models than others. Auto-stop, where you simply dial the target pressure into the inflator and it pumps out air until that pressure is reached, is the ultimate system for ease of use. Digital displays are generally easier to read than traditional analogue dials, plus they take away the guesswork of pressure figures that fall between marks on the gauge.

Of course, getting a tyre’s pressure bang on is only possible if the inflator can be detached from the valve quickly and easily to prevent excess air escaping in the process. In recent years, screwed couplings have become popular because they’re faster and more effective than old-fashioned lever couplings.

Deflate buttons are another innovation that are definitely worth having. You can effortlessly and accurately bring an over-inflated tyre down to the correct pressure using the inflator’s gauge. Talking of which, we also compared each inflator’s gauge reading to a known datum to check its precision. 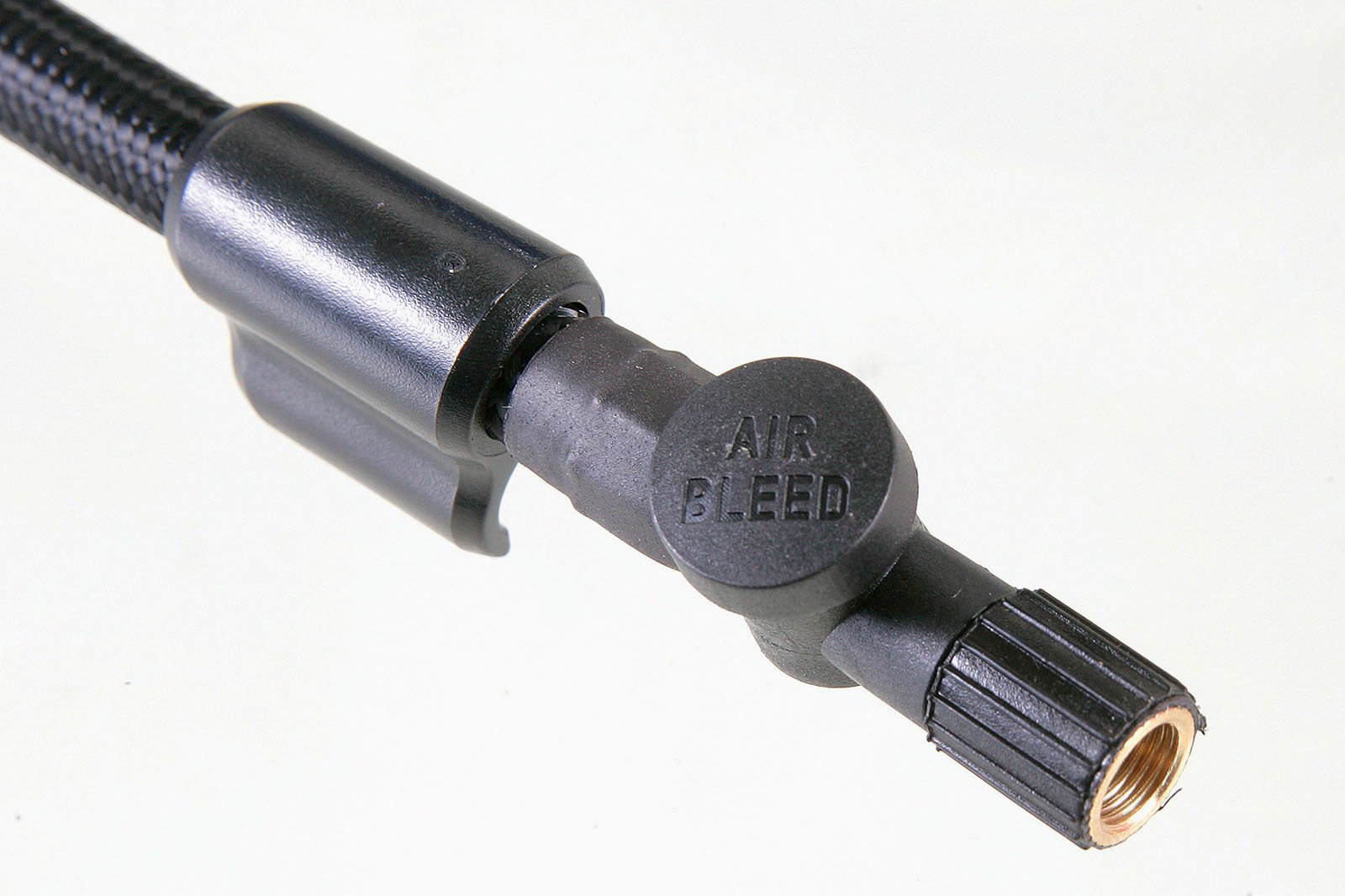 Finally, we appraised other features that some units have. Lights are useful, obviously – turning the inflator into a powerful torch for all forms of emergencies. Power outputs are another bonus, whether that’s transforming a 12-volt supply into a spare USB output or using a cordless model’s internal battery as a 12-volt/USB power pack.

Low pressure/high volume inflators work much faster on leisure inflatables such as airbeds and dinghies. Deflators come into their own when putting those away, allowing you to vacuum-pack inflatables to the point where they might even fit back in their boxes. 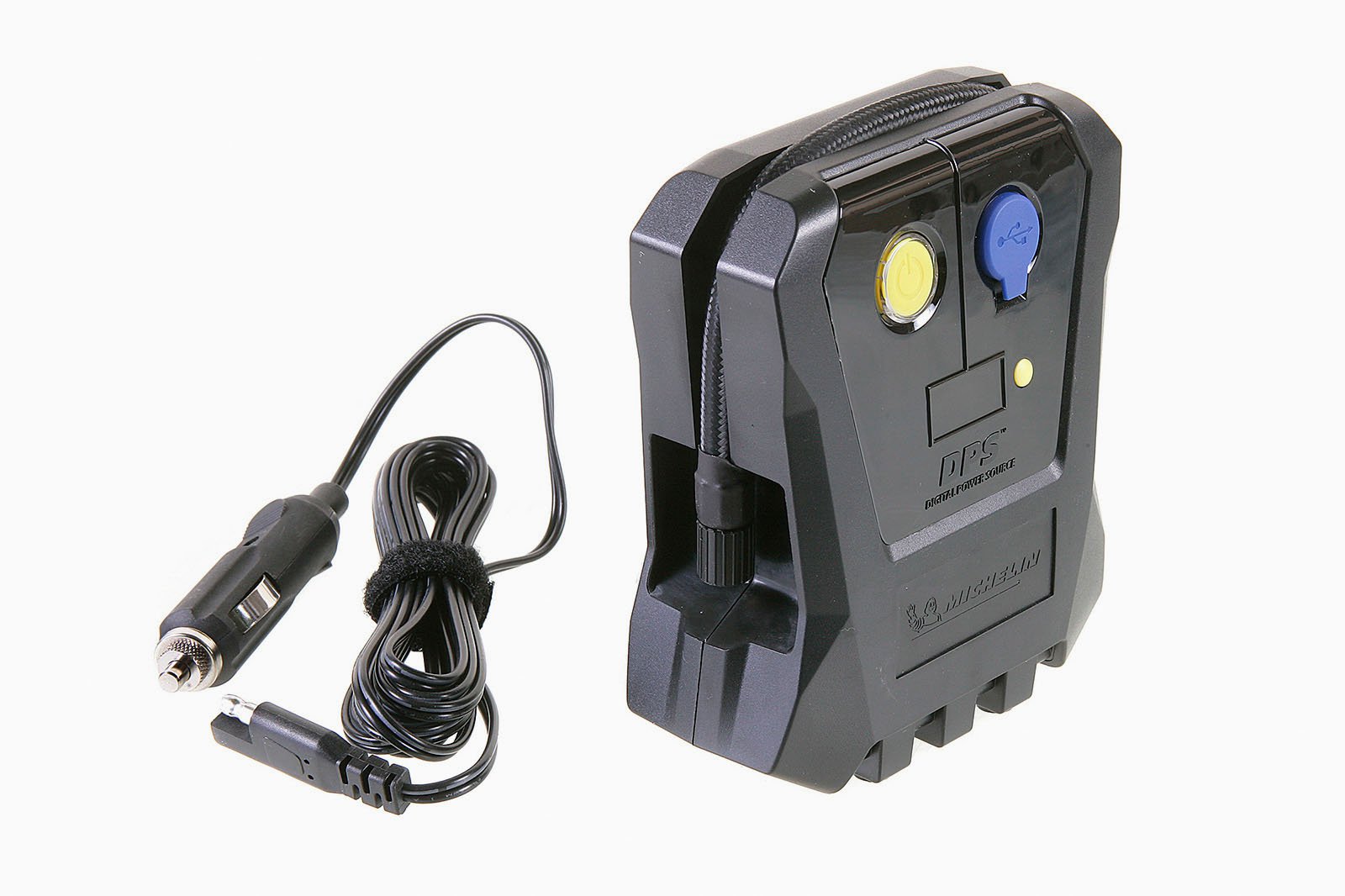 Compact? Michelin isn't joking. This inflator is barely bigger than a small tablet computer or Kindle (albeit a rather fat one). Not only will it slip into most gloveboxes, but it's also possible to put it in a door pocket. Diminutive size means compromised performance, though – hence Michelin putting Top Up in the name.

The inflator is simply too slow to pump up most tyres from flat without exceeding its 8 mins on/8 mins off duty cycle. Using it with tyres needing more than 40 PSI isn’t recommended either. Although this a nicely made product, cheaper – and only slighter bigger – rivals are much more versatile. 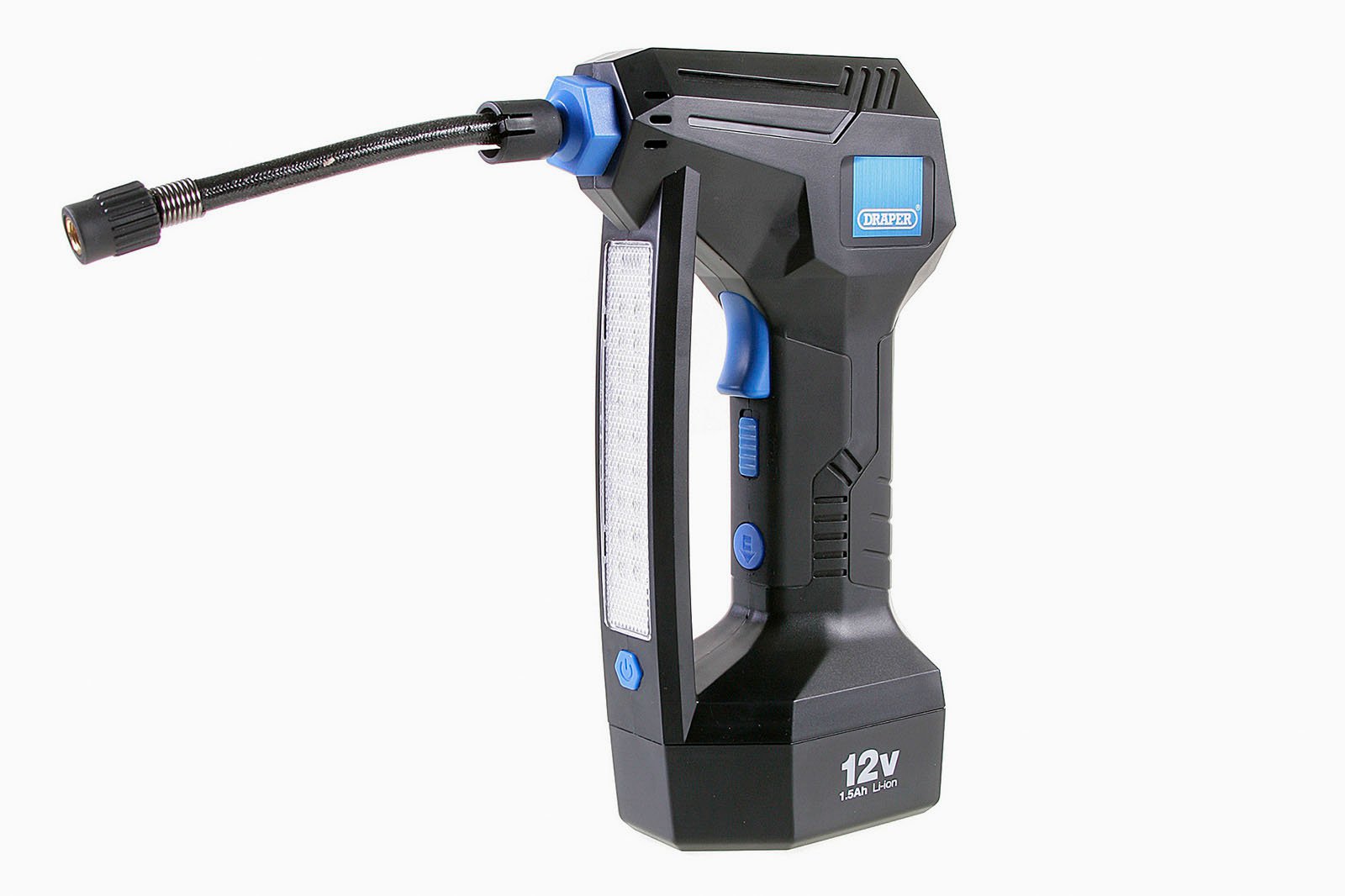 Here's a great concept: an inflator that’s cordless for maximum convenience but can also be connected to a 12-volt supply so it can continue pumping if the battery drains down.

But while its portable nature and trigger style are perfect for squeezing in the odd PSI or two, this model's rather slow inflation speed and short (15cm) air hose make longer pumping jobs tedious.

If, for instance, the tyre's valve is even a few inches above the ground, that short hose means you'll have to hold the unit for the duration. At that point, the auto-stop, when target pressure is reached, becomes rather academic. 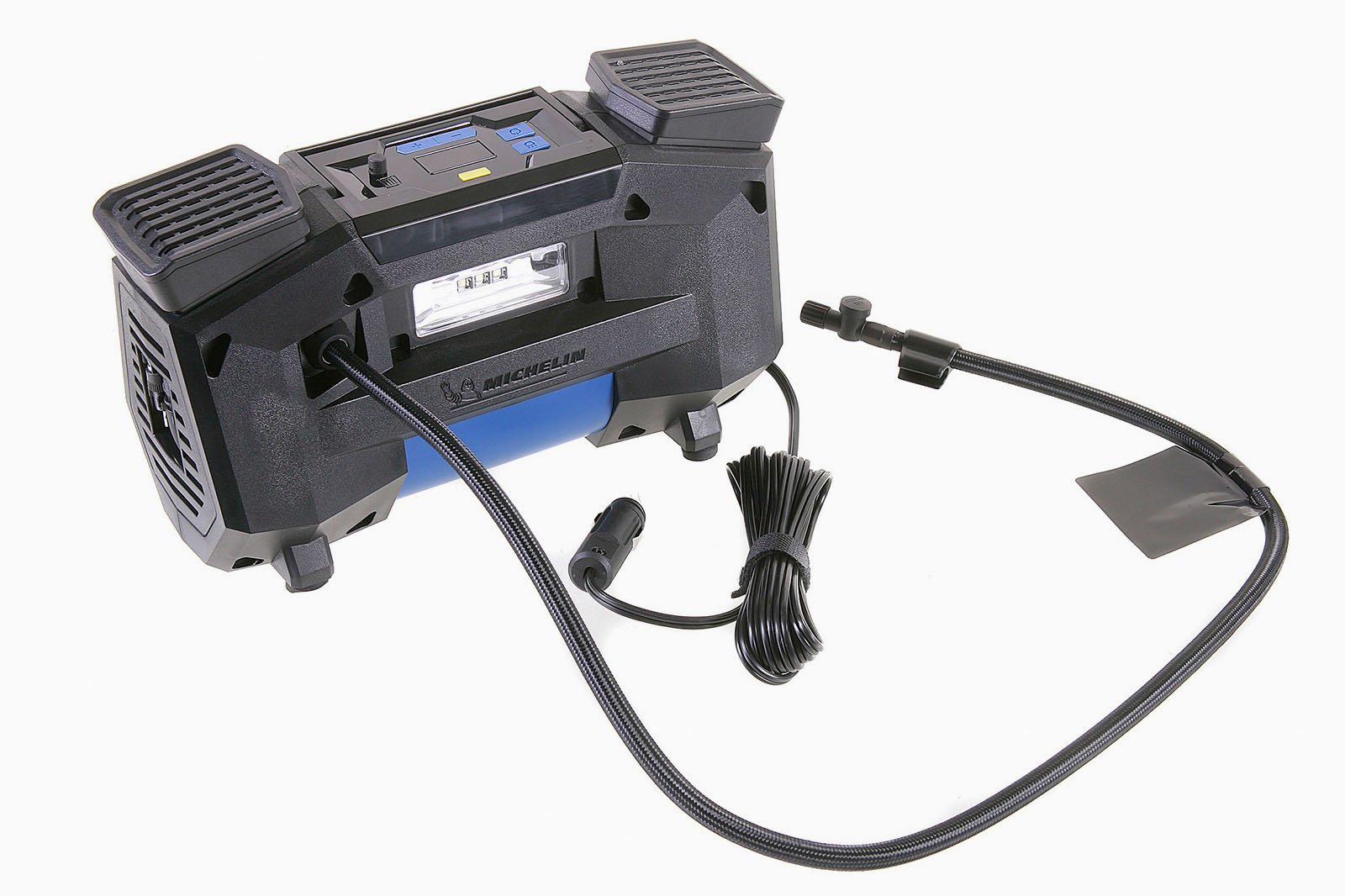 It probably took longer to type in that mouthful of a name than for the unit to inflate our test tyre from flat. This is the outright fastest inflator here and it's a cracking piece of kit. The 3m power lead, 85cm air hose, screw-on valve coupling and auto-stop at the desired pressure make it a doddle to use.

The Deflate button means correcting over-inflated tyres accurately is just a press away. The best feature of all, though, is a tiny rubber nubbin to place the removed valve cap on, meaning you'll never misplace one again. Only the premium price robs it of more points here. 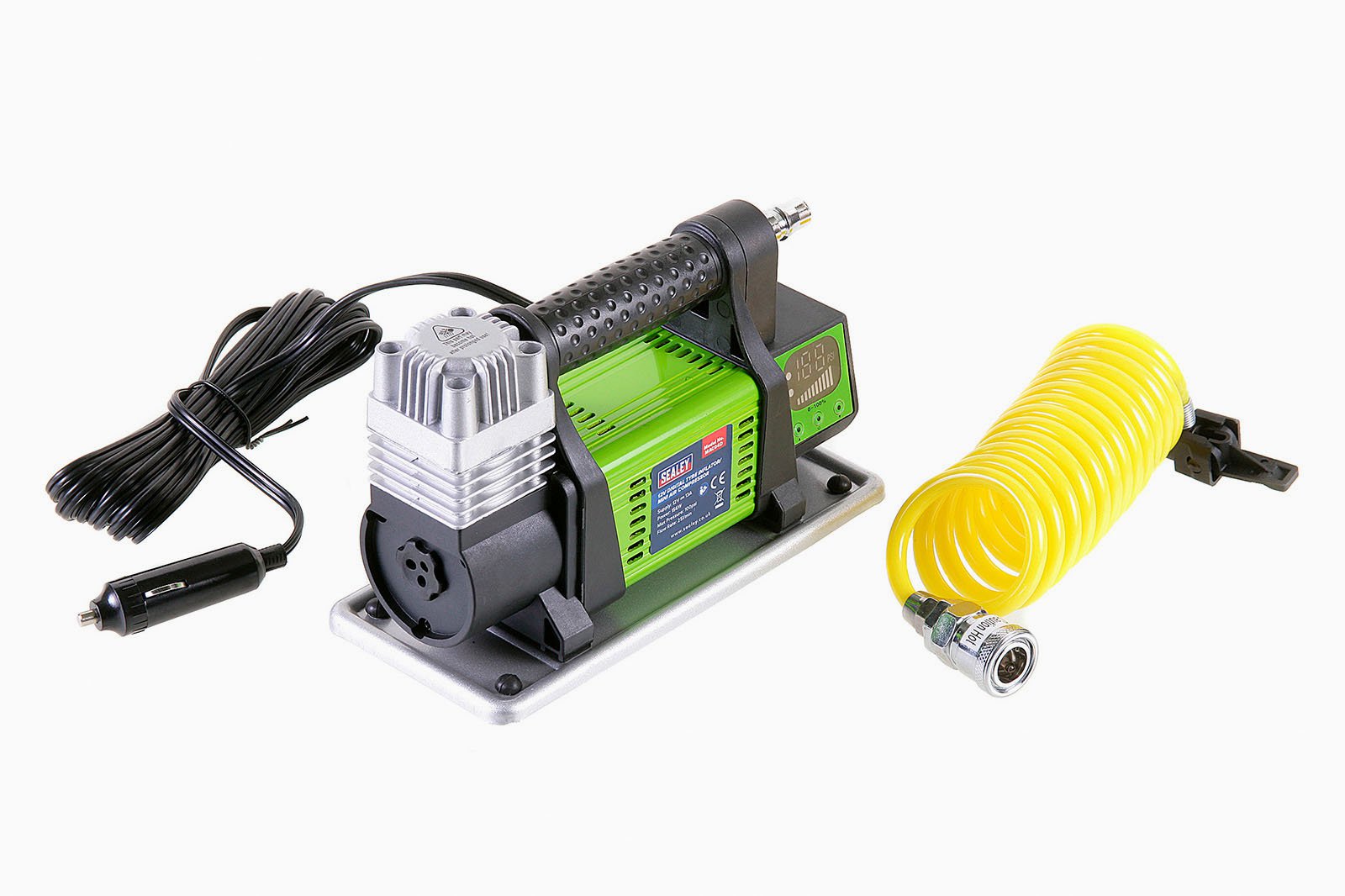 This leftfield unit from Sealey gets the bulk of the basics right – but often in an odd way. For instance, the generous 5m power lead means the inflator can always be positioned right by the wheel, making its 2m coiled air hose a little excessive.

We like the digital gauge and auto-stop facility, but pressure has to be expressed in PSI only, unlike with all the other units here. The gauge, annoyingly, shows target pressure rather than actual pressure, leaving a coloured bar display to chart inflation progress. Our final niggle is the old-school lever-type tyre coupling. 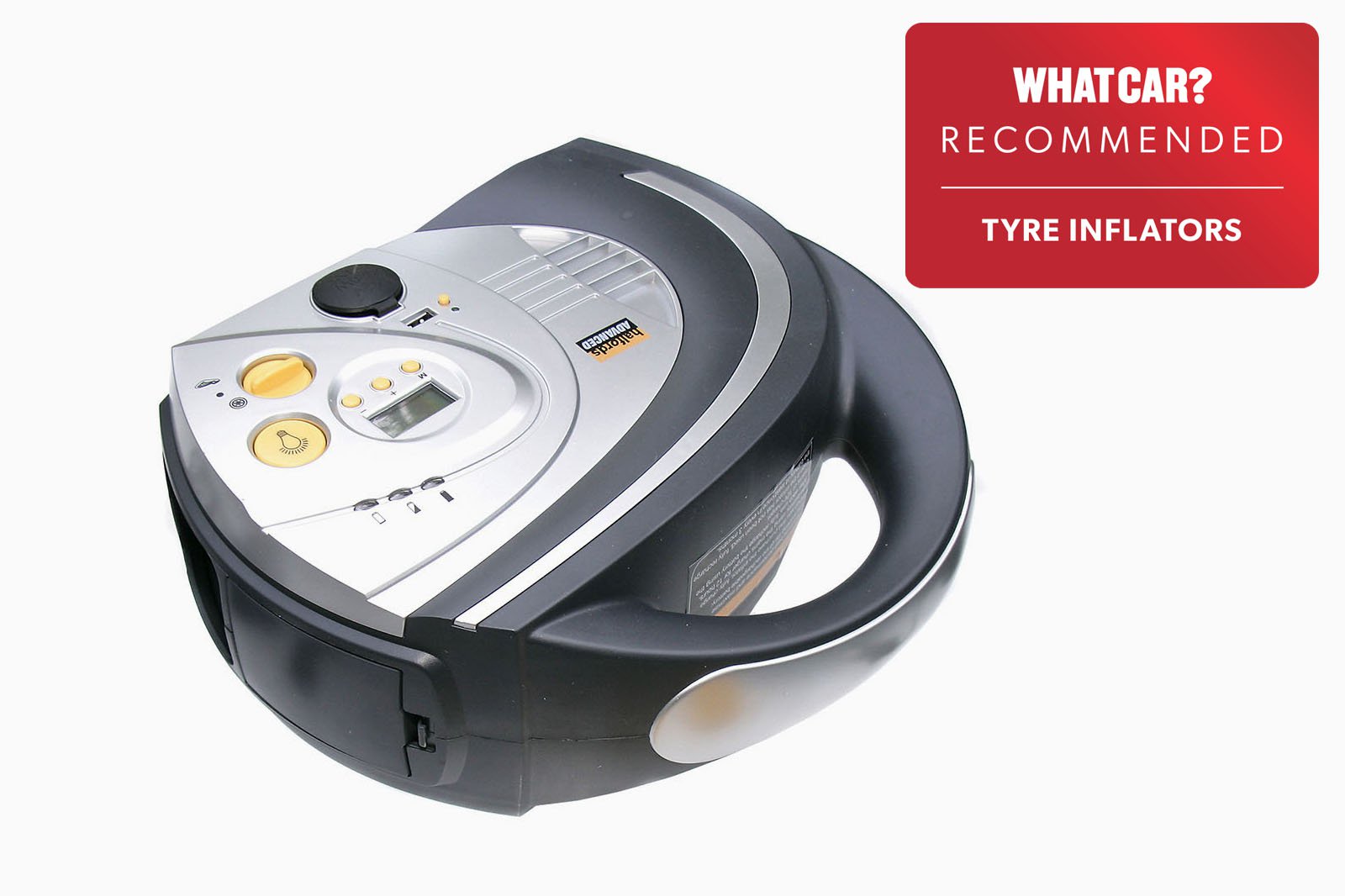 Although it's been around for some years now, it's testimony to Halfords that this model still cuts it so well with newer rivals. If it was launched today, we suspect it would have a Deflate button to go with the screw-on valve coupling, it would probably be a bit smaller, and it would almost certainly come with a carry bag.

The good points far outweigh these minor moans, though. These include the digital gauge with auto-stop, mains and 12-volt chargers, 12-volt and USB output sockets, a decent LED light, and a built-in inflator and deflator for fast inflation/pack down of airbeds and other low-pressure accessories. 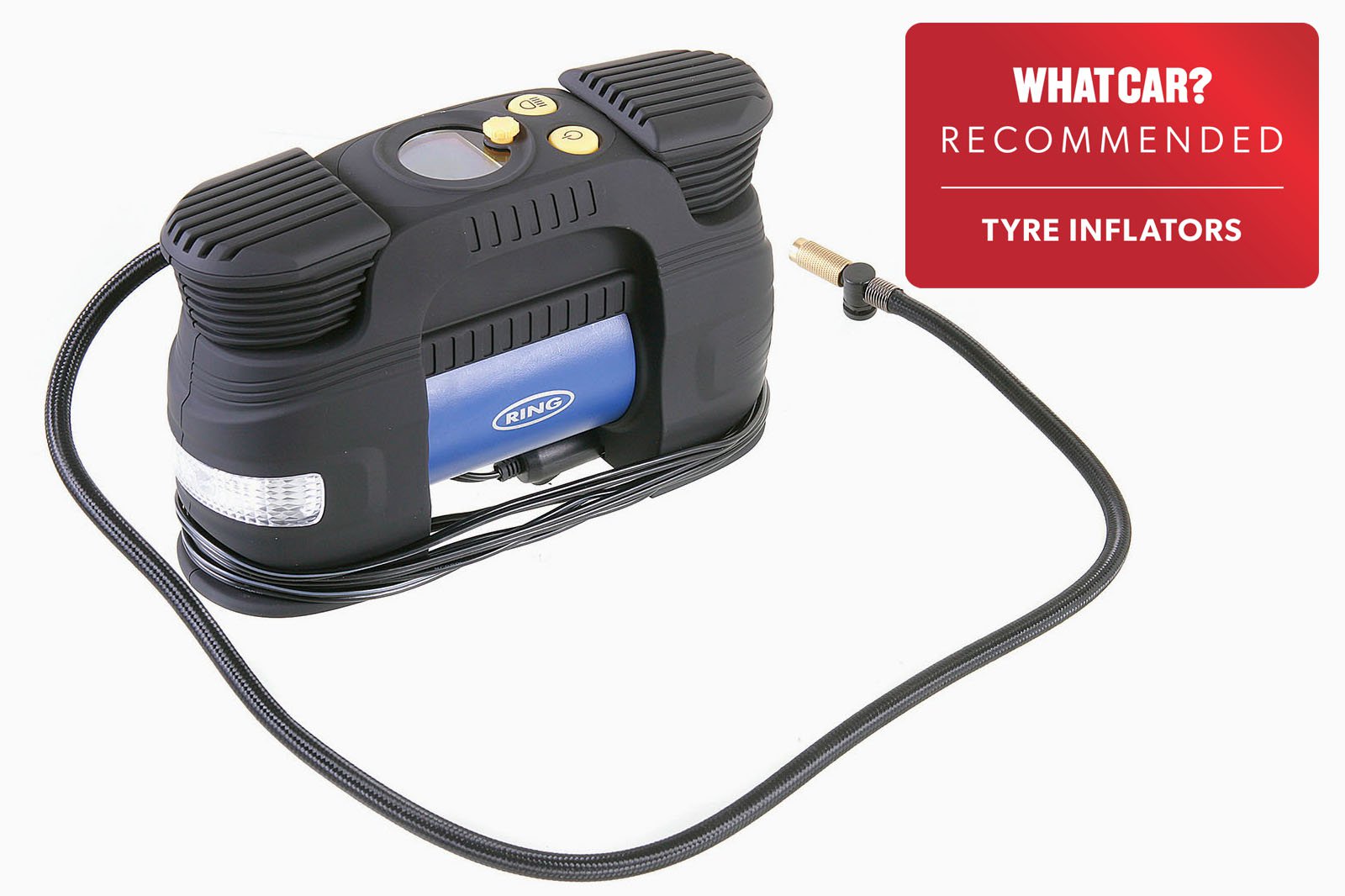 Ring’s RAC830 takes second place in the speed stakes, behind Michelin’s Superfast model. But it only lost out by a mere two seconds.

Yet in all other ways, and features, there's almost nothing to choose between the two models – despite the almost £20 price difference. In fact, few inflators are as intuitive to use as this one.

The large display shows actual pressure as well as target pressure, and a single knob is used to set the target level. You press it to toggle through PSI, Bar and other units, and twist it to set the value. Couldn’t be easier. 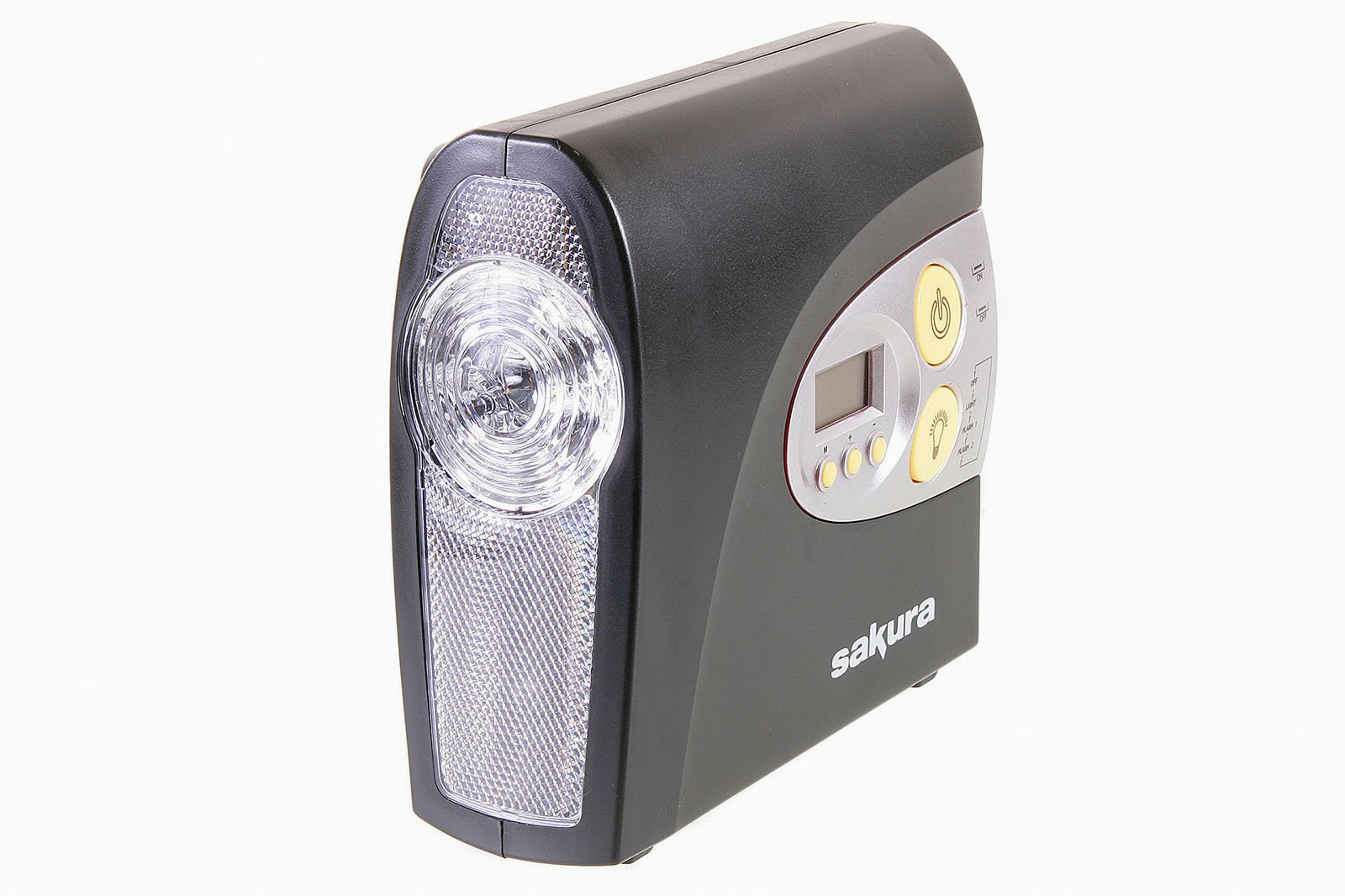 Here's one of three very similar, and obviously closely related, units that made us question the logic behind Michelin's tiny Top Up model in position 10.

In reality, this isn't much bigger, but it has enough grunt to tackle most tyres from fully flat. The time taken to inflate our test tyre, though not particularly speedy, was comfortably within this unit's 15-minute duty cycle.

Considering the budget price, Sakura really hasn't skimped on the extras either. The digital display has a built-in auto-stop, both the power lead and air hose are decent lengths, and the air hose even has a deflate button. 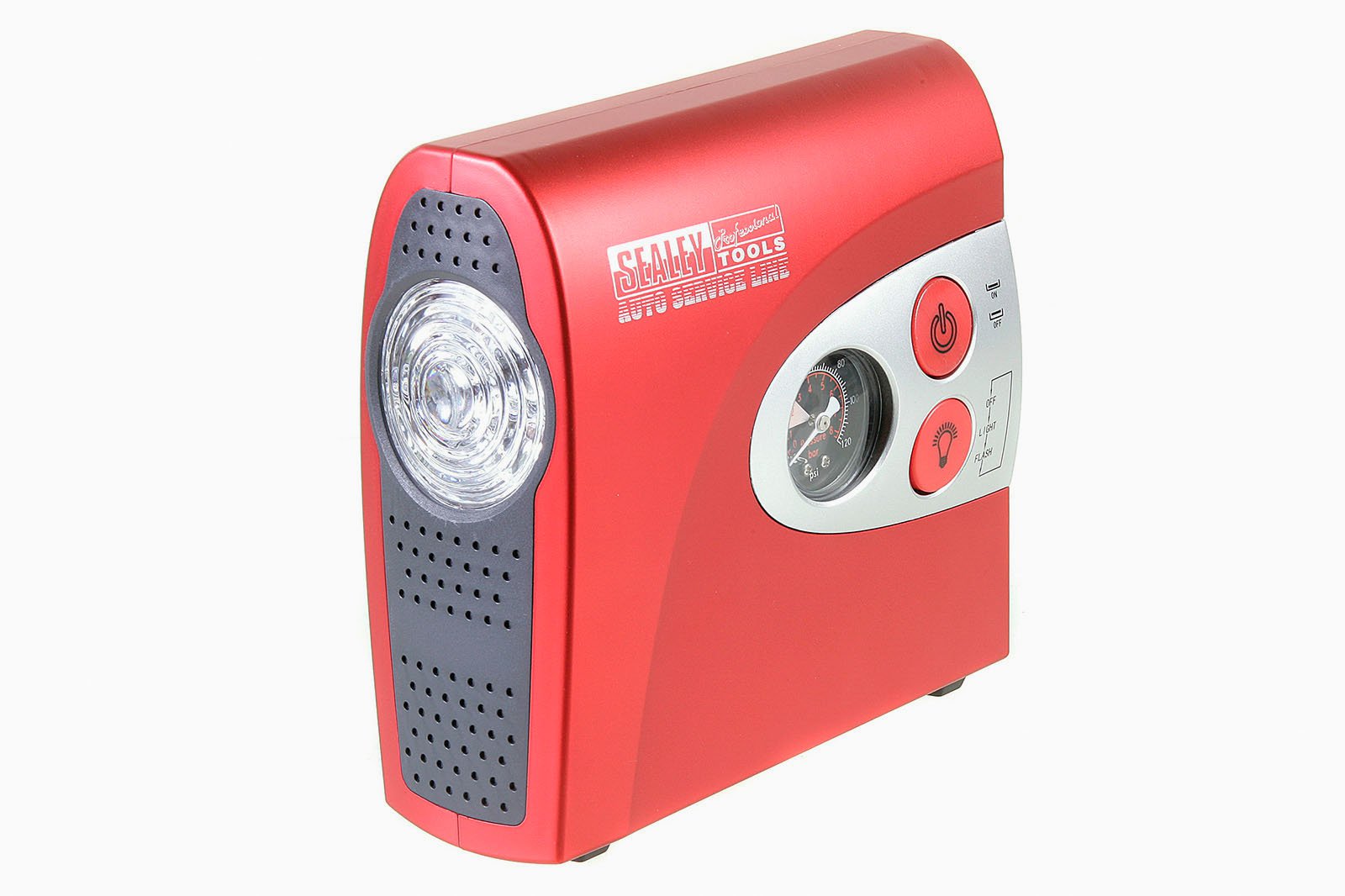 It’s not hard to spot that this unit and the Sakura SS5332 share the same case shape. That's where the similarities end, though. As soon as the MAC01 was fired up, its more energetic, smoother note suggested that this and the Sakura have different bits inside – and it was no surprise that it shaved more than two minutes off the Sakura's inflation time.

But speed is the only advantage the MAC01 has over the two. We prefer the SS5332's digital gauge and auto-stop to the MAC01's analogue dial. Similarly, the MAC01's lever-type valve coupling seems primitive compared to the Sakura's screw coupling and deflate button. 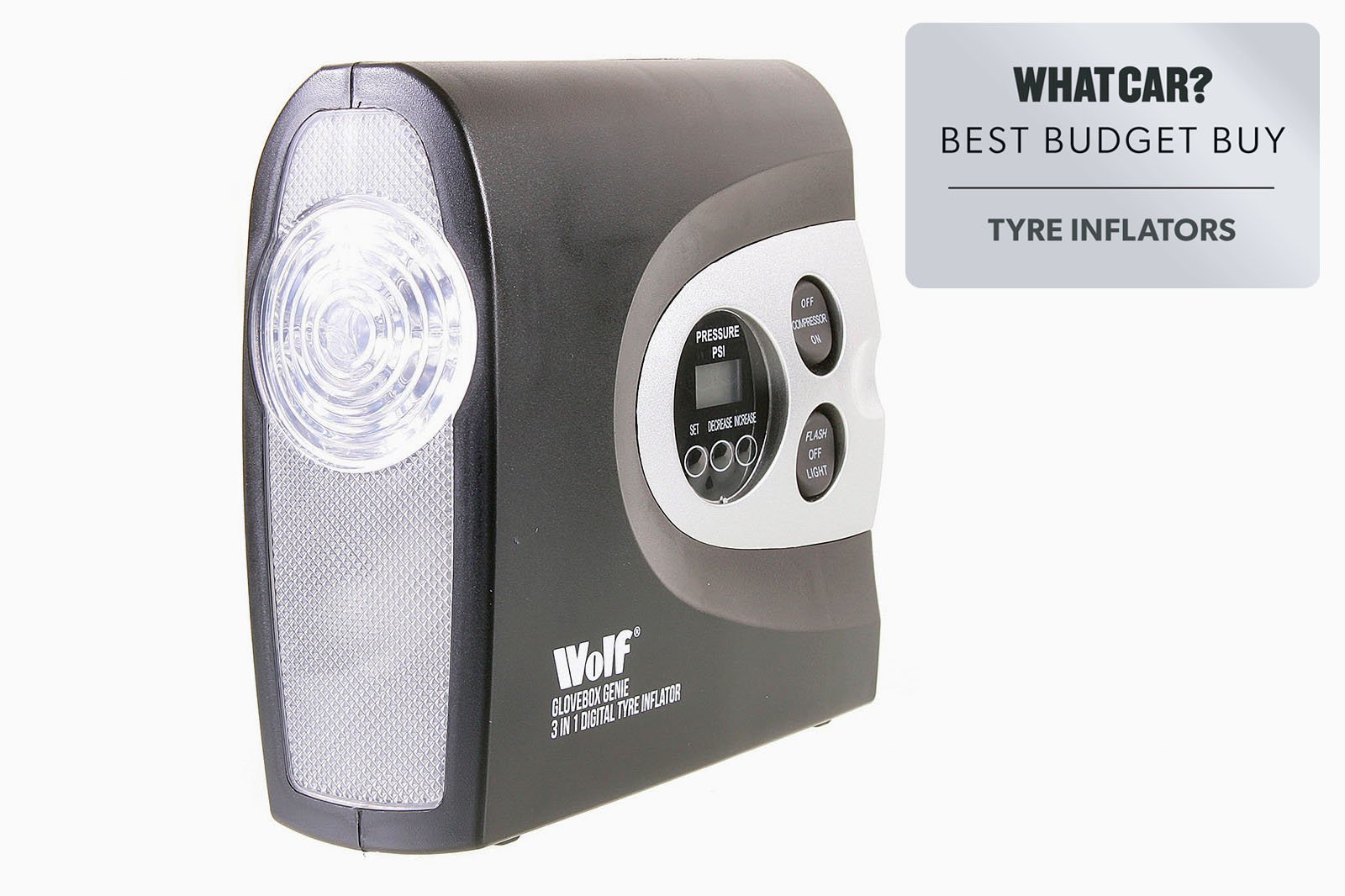 Wolf's Glovebox Genie is the third cousin from the Sakura SS5332/Sealey MAC01 family, and it's definitely the best all-rounder. Price wise, it only costs a couple of quid more than the Sakura and is £17 cheaper than the Sealey. But, performance wise, it's only 25 seconds behind the Sealey's brisk test result.

The rest of the unit is much more Sakura than Sealey. Although there isn't a deflate button, the Glovebox Genie has a digital gauge, auto-stop and a screwed valve coupling. The power lead is marginally shorter than many, and that's really the only compromise to price we could find. 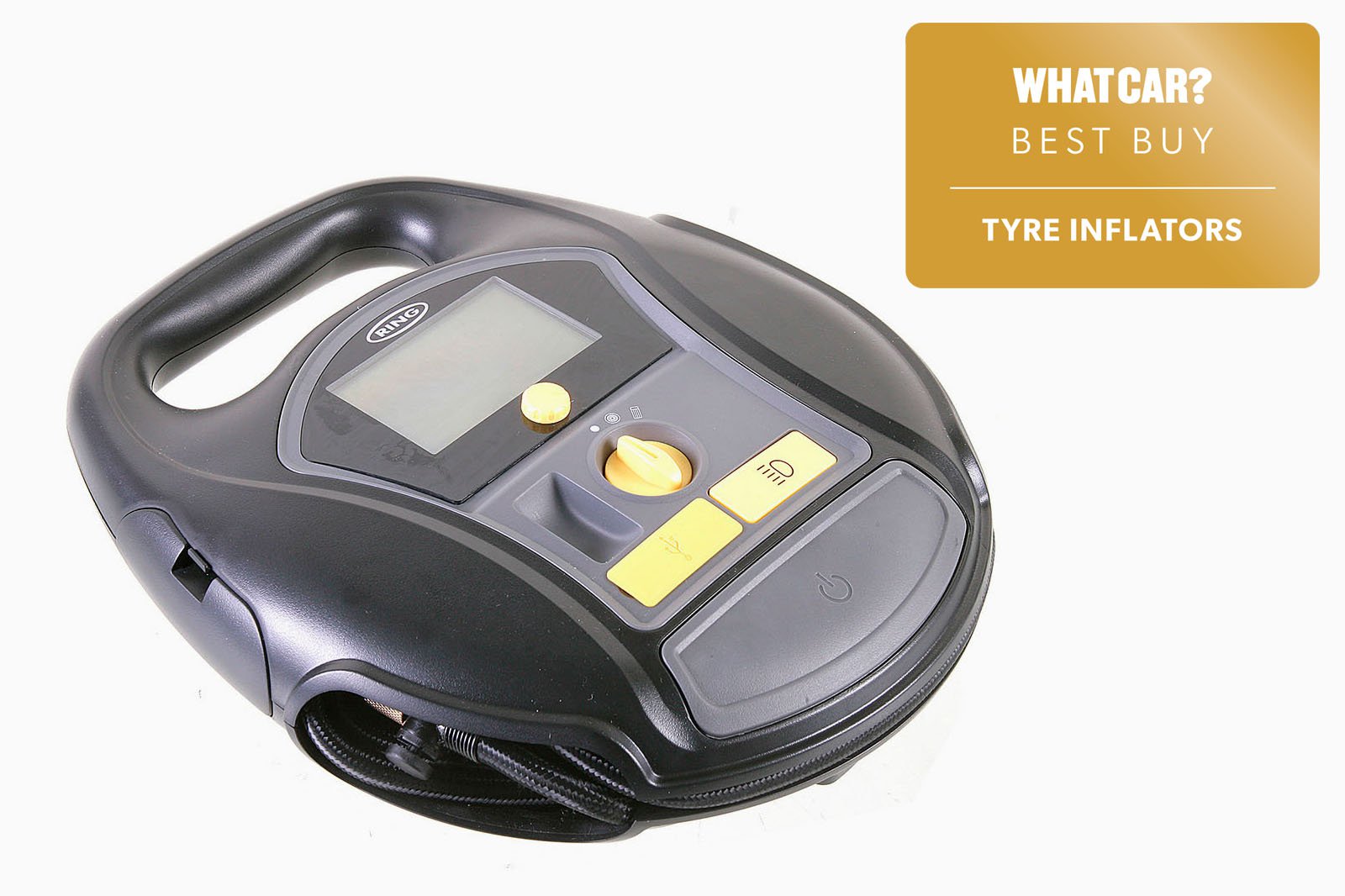 Our winner lags slightly behind the two absolute front-runners from Michelin and Ring in terms of tyre-filling time, but only by about 20 seconds. We'd argue that that makes this the faster unit because it must take more than 20 seconds to route and connect up a power lead, which is unnecessary with this cordless model.

In many ways, this is the recommended Halfords Rechargeable model perfected. It’s smaller, faster, comes with a smart carry bag, still retains a leisure inflator/deflator and is fitted with a Deflate button. Best of all, it has the same foolproof knob and display set-up we liked so much on Ring's RAC830.

For all the latest reviews, advice and new car deals from What Car? sign up to our weekly newsletter here