The number of warning lights on your car’s dials and dashboard can be confusing, so we explain what they mean and whether you have to worry...

Modern cars are brimming with electronic systems, the majority of which are fitted with sensors to monitor their condition.

If the sensors detect a problem, you’ll be alerted to it by warning lights, which are typically displayed within the speedometer and rev counter dials or elsewhere on the dashboard of your car. As a general rule, amber warning lights mean something needs to be checked by a professional, while red lights require immediate action from the driver.

Many of the lights will come on when you start the car and then quickly disappear, which isn’t anything to worry about. But if they stay on or illuminate while you’re driving, it can be cause for concern.

Given the number of different warning lights, it can be confusing to know what’s what, so here are the meanings of some of the most common ones. 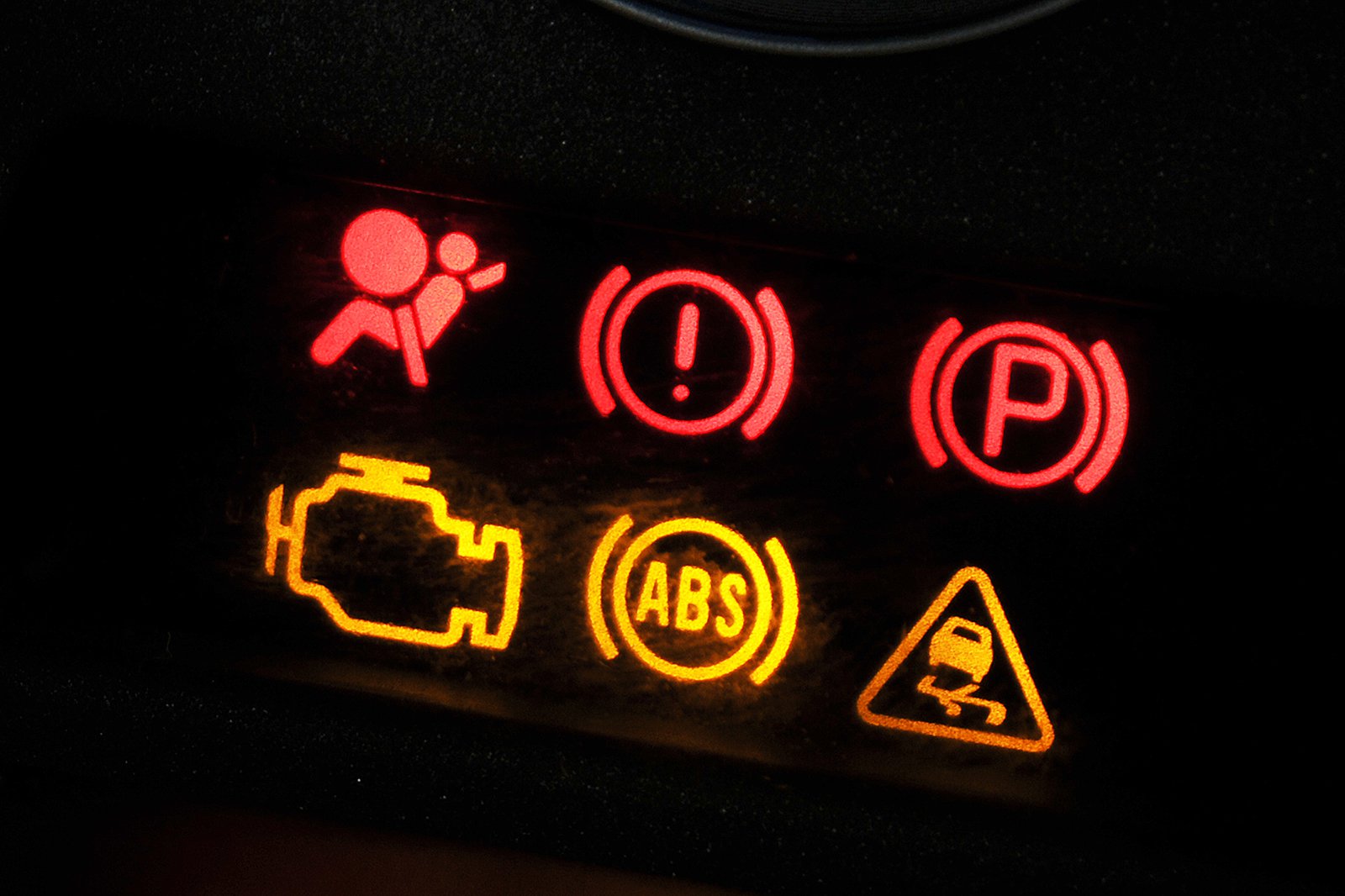 This means the anti-lock braking system (ABS) isn’t functioning correctly, but it doesn’t mean the brakes aren’t working at all, as the car will probably come to a stop fine in normal conditions. However, the ABS is designed to stop your car from skidding when you hit the brakes hard or when you’re braking on slippery surfaces, so if it isn’t working, it’s best to get it checked. 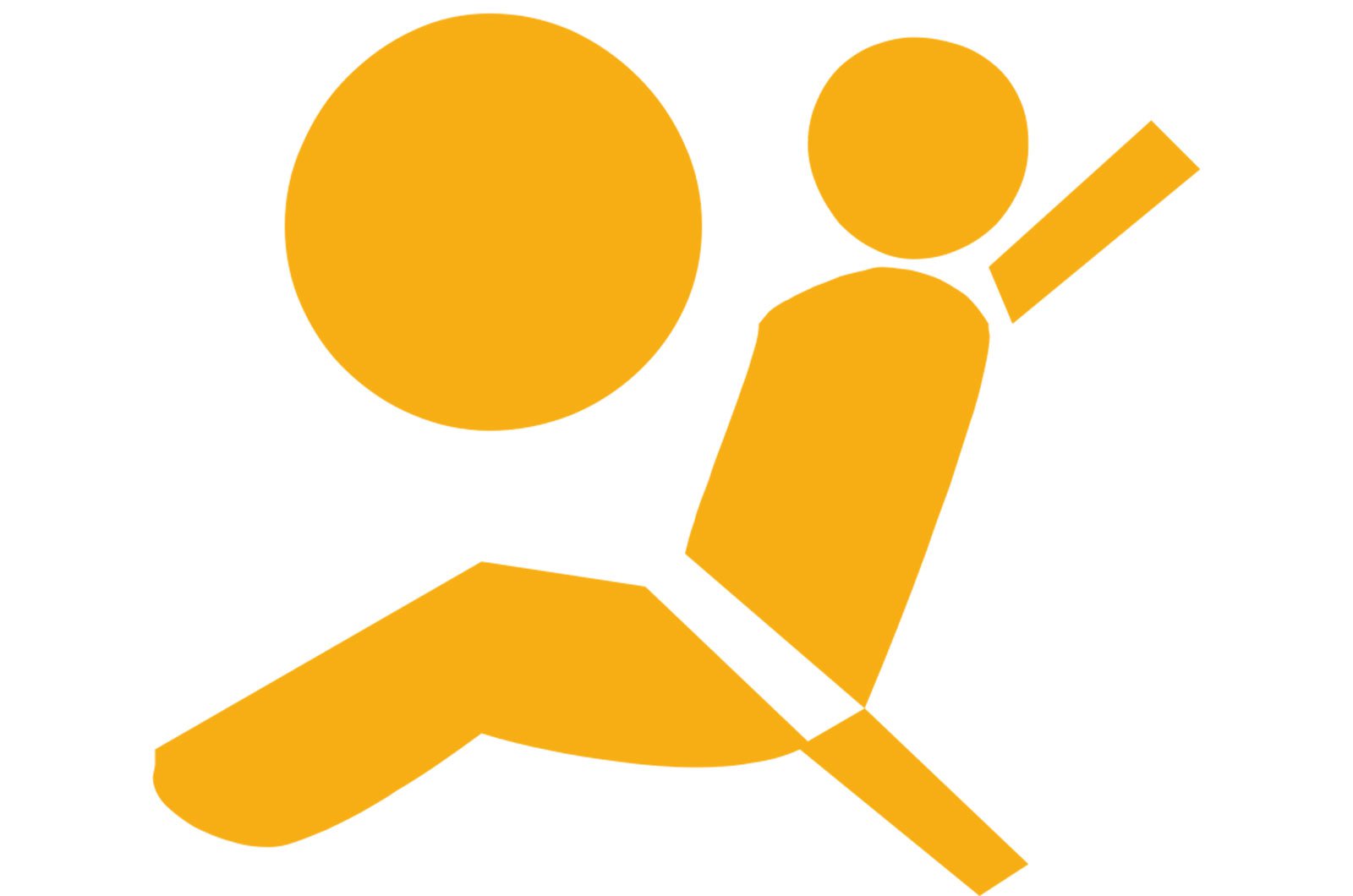 An image of a seated passenger with what looks like a beach ball in front of them points to a problem with the airbag system. Many modern cars allow you to manually deactivate airbags, which is sometimes necessary when you’re fitting a child seat, for example, so the airbag warning light may come on then. However, if you haven’t deliberately turned off the system, get the car checked out, because airbags are vital safety features. 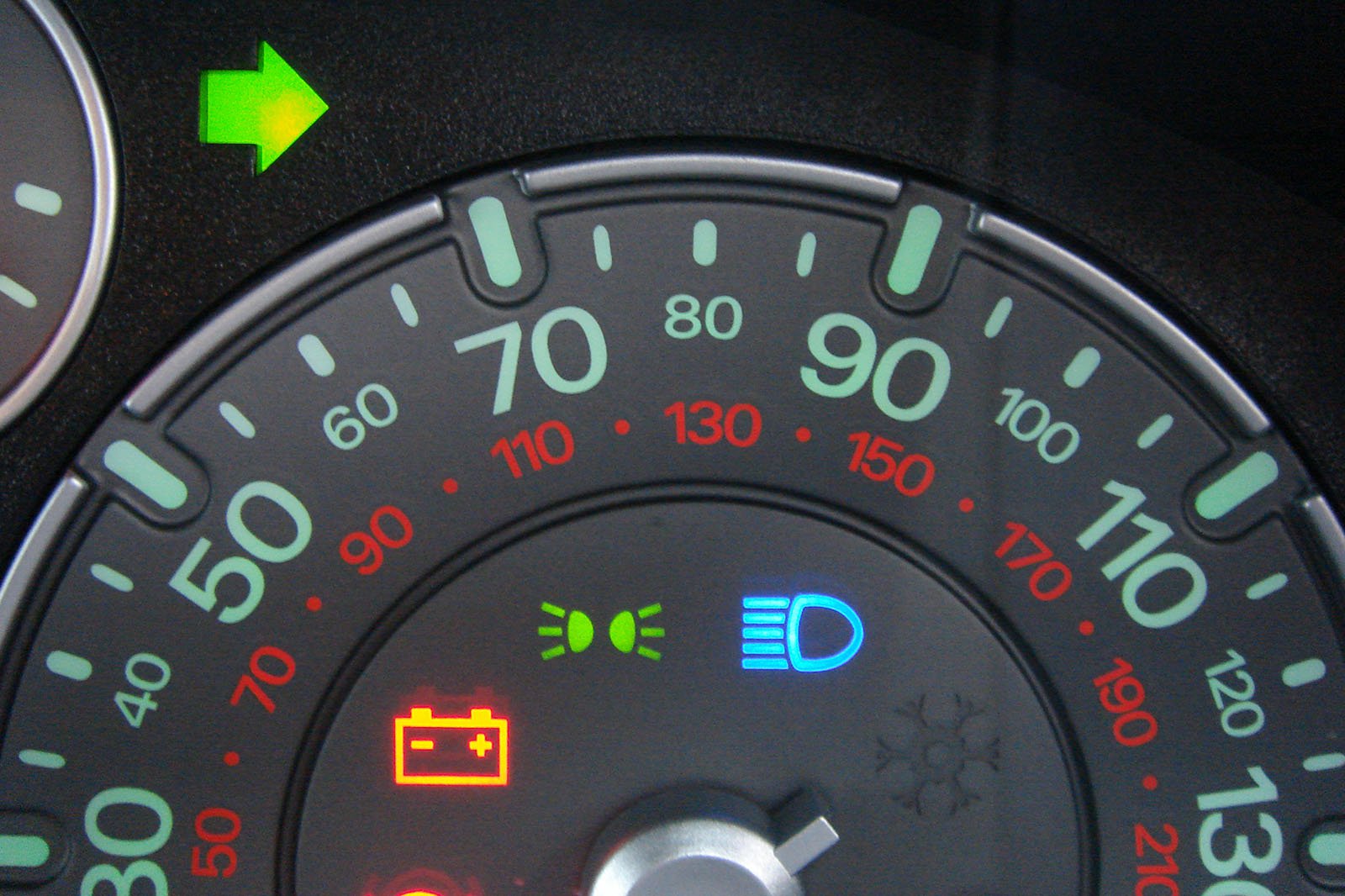 The battery symbol is one of the more ambiguous warning lights. At its simplest, it can mean the battery is low on charge, which isn’t unusual if the car hasn’t been driven for a while. Low voltage on a car that is driven regularly can mean it’s time to replace the battery, though. The warning light can also point to other problems with the electrical and charging system, such as issues with the alternator or damaged wires or ignition cables, which can require a more involved diagnosis. 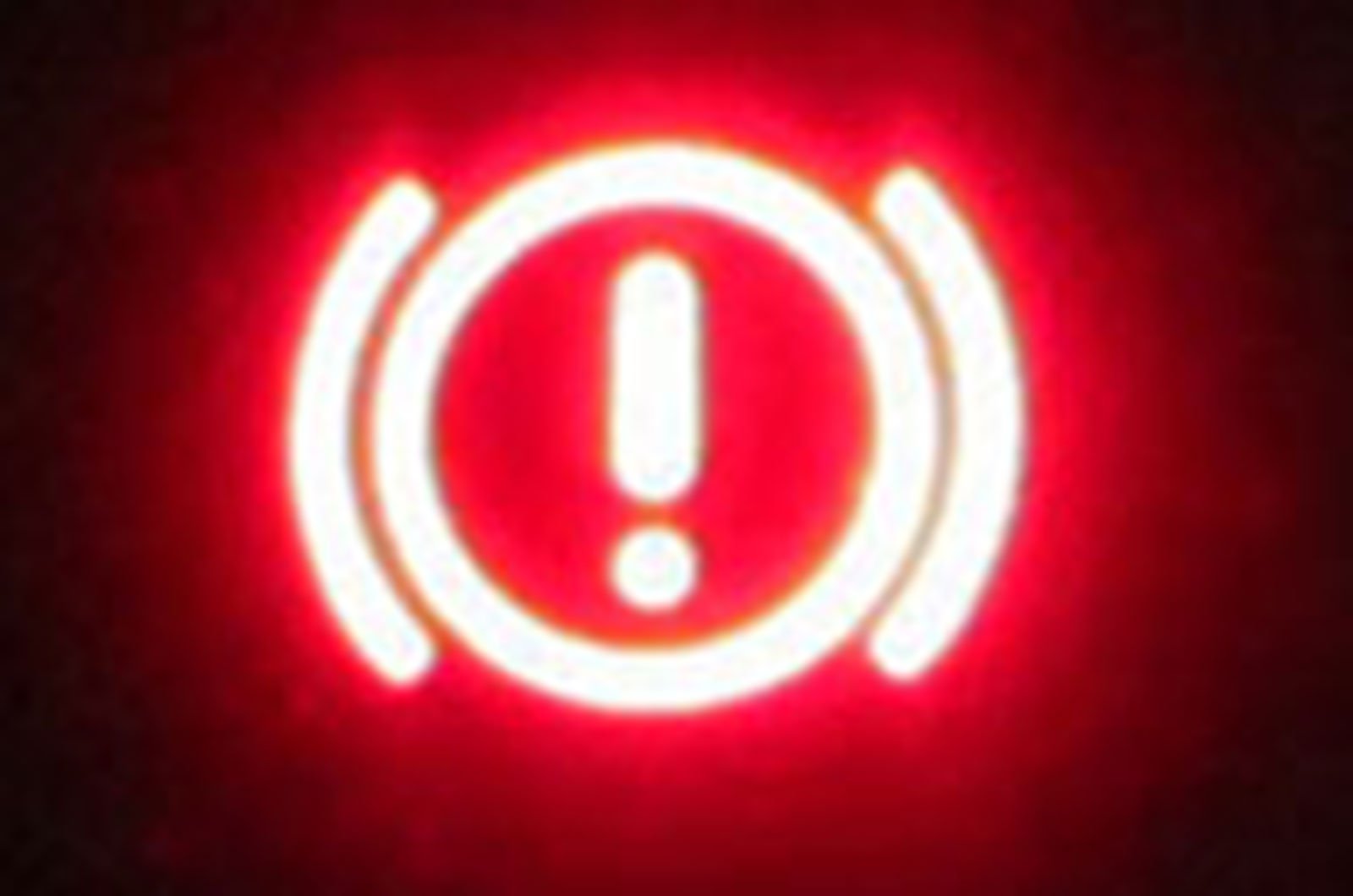 This one’s obviously important, which is why the light itself is a red exclamation mark. It might just mean you just haven’t fully released the handbrake, so make sure it’s completely off before you get too worried. The light can point to a more serious problem with the braking system, though, and you really don’t want to take any chances, so have the car inspected as soon as possible if it comes on.

Some cars have a brake pad wear warning light, which is usually an orange circle with six dashes around the edges. This isn’t as urgent as the red exclamation mark, but it does mean that one or more of the brake pads is reaching the end of its life. It doesn’t need instant attention, but you should book the car in for replacement brake pads as soon as possible. 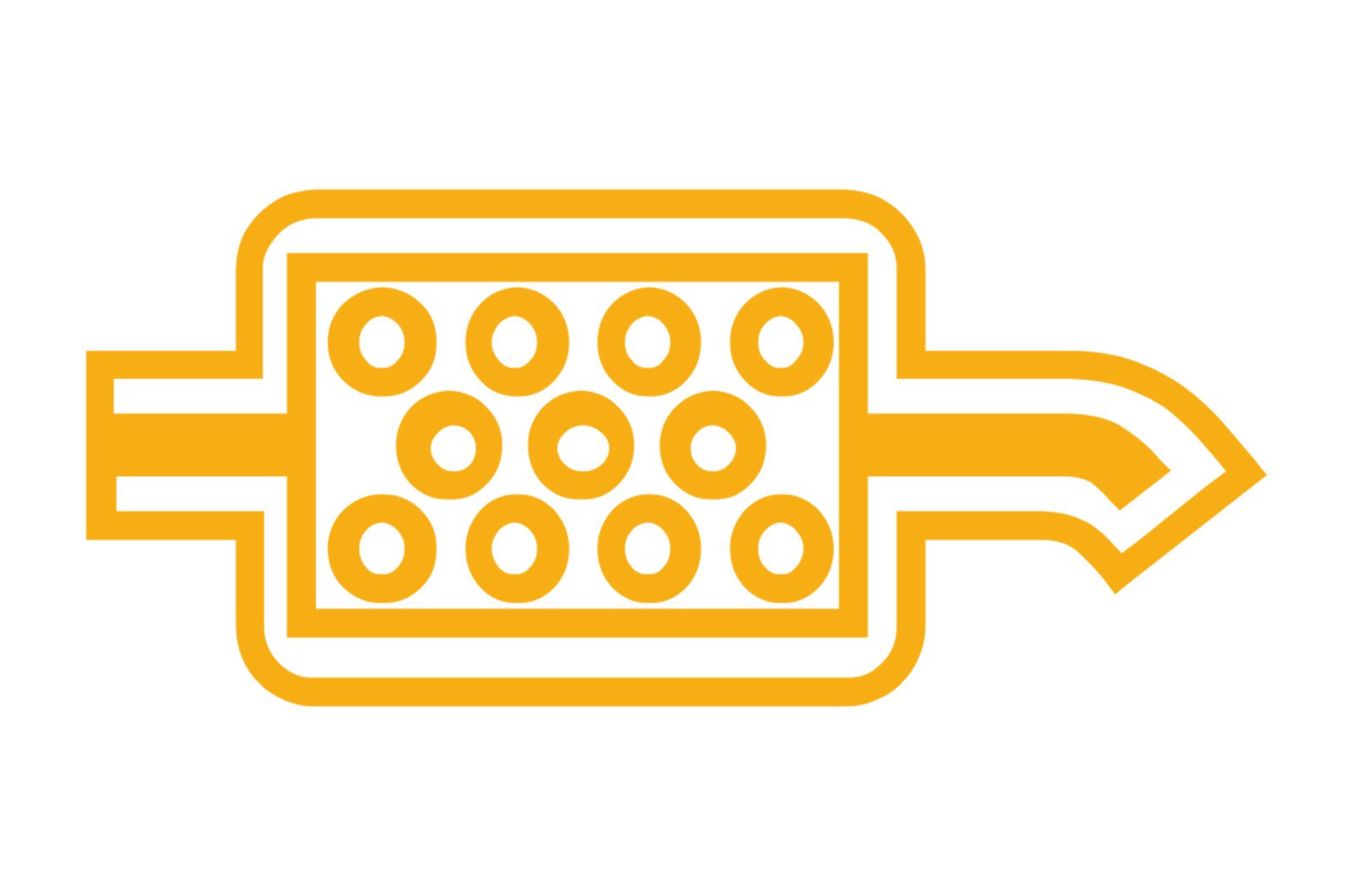 The exact appearance of this light can vary, but it usually has a series of circles arranged in a rectangle to resemble an exhaust, and some add three semicircles designed to look like a cloud. The particulate filter on diesel-engined cars can become clogged and cause problems, particularly if you’ve recently done a lot of low-speed/stop-start driving. Driving for a time at higher speeds on the motorway should be enough to unclog the filter, but if the light doesn’t go away after that, further attention is required. 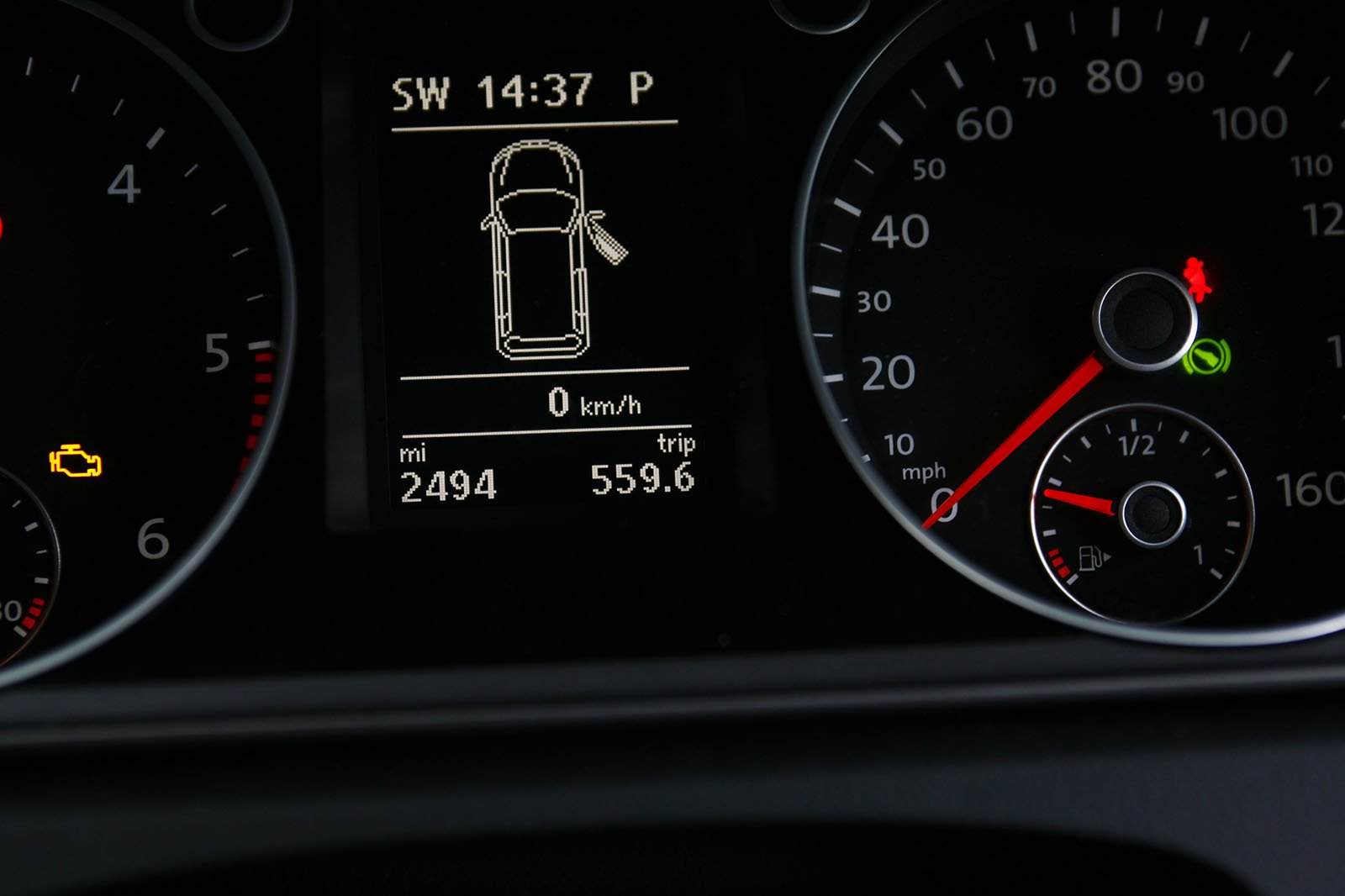 If you’ve left a door, the boot or the bonnet open, there isn’t anything wrong the car, but it isn’t safe to drive off until it’s properly closed. The symbol itself is usually an image of a car with the corresponding body panel sticking out.

A red thermometer in water means your car’s engine is getting too hot and there’s a problem with the cooling system. The coolant might be running low and simply need a top-up (check the gauge on the coolant reservoir under the bonnet first), and it’s always best to do this when the engine is cold. Don’t rule out a leak in the system, either. This warning light can also point to much bigger problems, such as a broken radiator, water pump or head gasket. 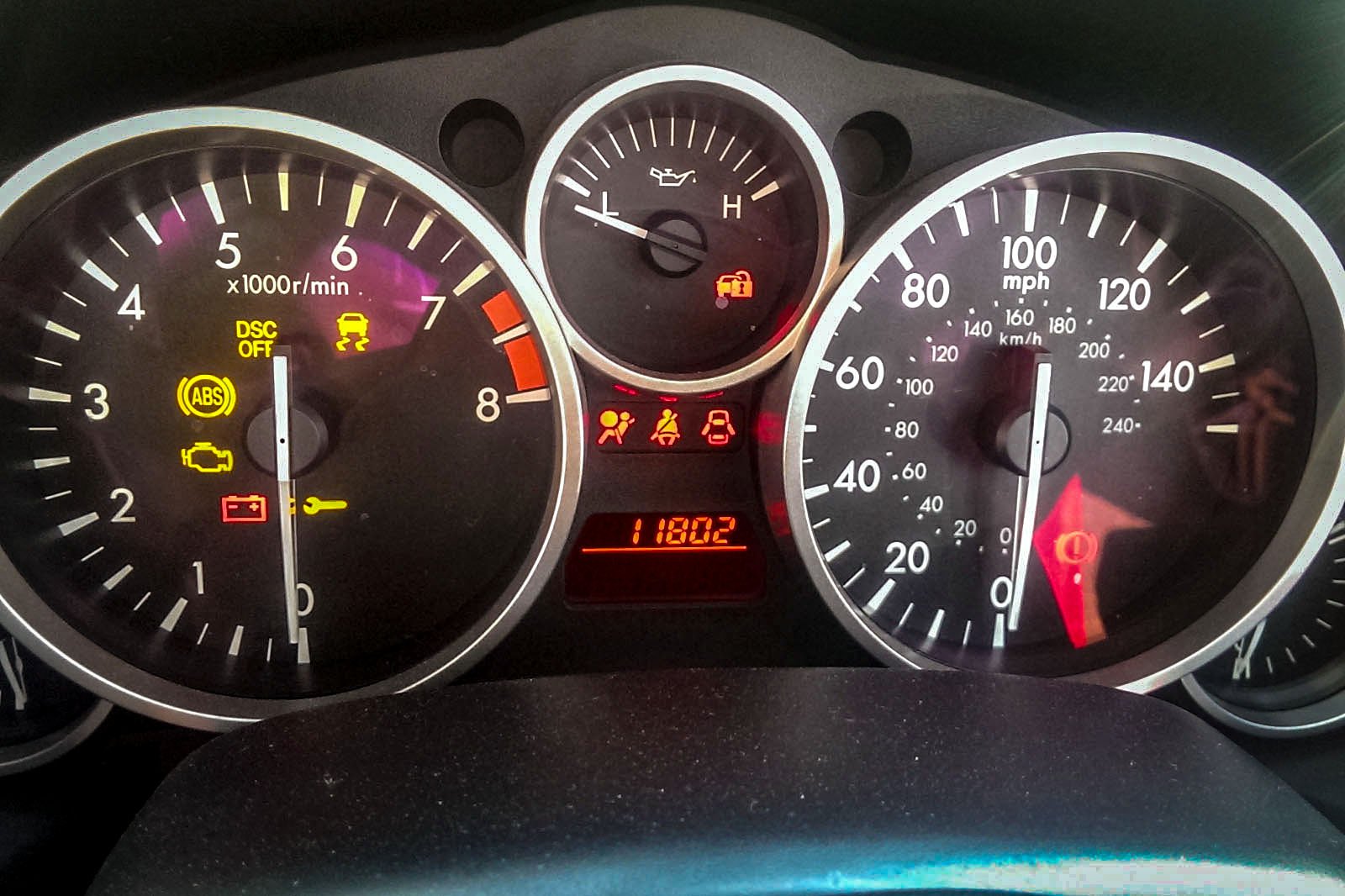 An orange light in the shape of an engine is the most vague warning light of all and means the engine control unit (ECU) has detected a problem. Exactly what that problem is can vary dramatically; it could be anything from a faulty sensor to a serious mechanical failure. So it’s a good idea to get the car checked out as soon as you can. 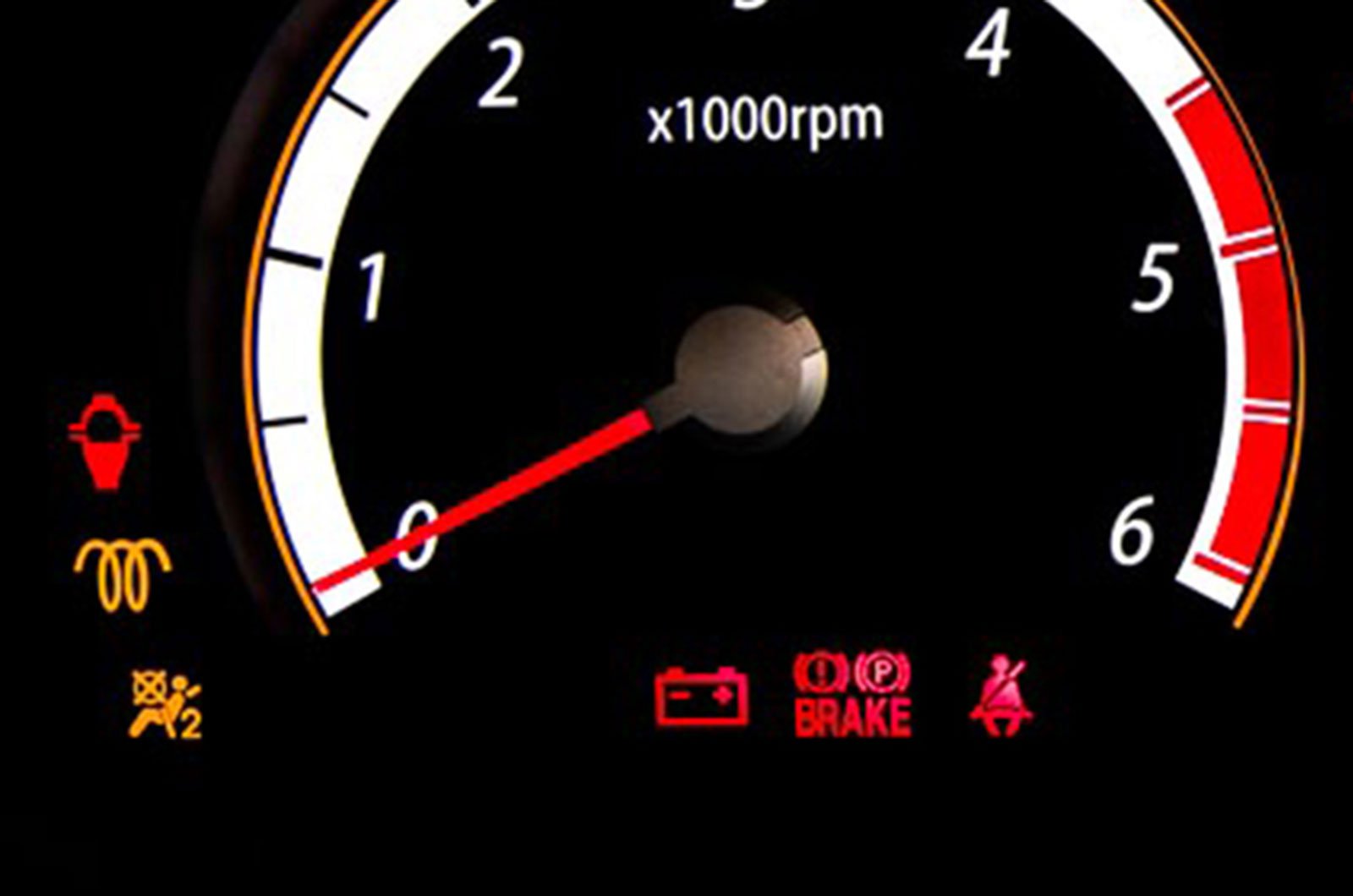 Glow plugs are specific to diesel cars; they help with combustion and are vital for getting the engine started when it’s cold. The glow plug warning light usually looks like a coiled piece of wire and it will typically remain on for a few seconds after you’ve turned the ignition key as the plugs heat up, especially on cold mornings. If that’s all that happens, there’s nothing to worry about, but if the light stays on or illuminates later, there might be an issue with the plugs or the systems that control them. 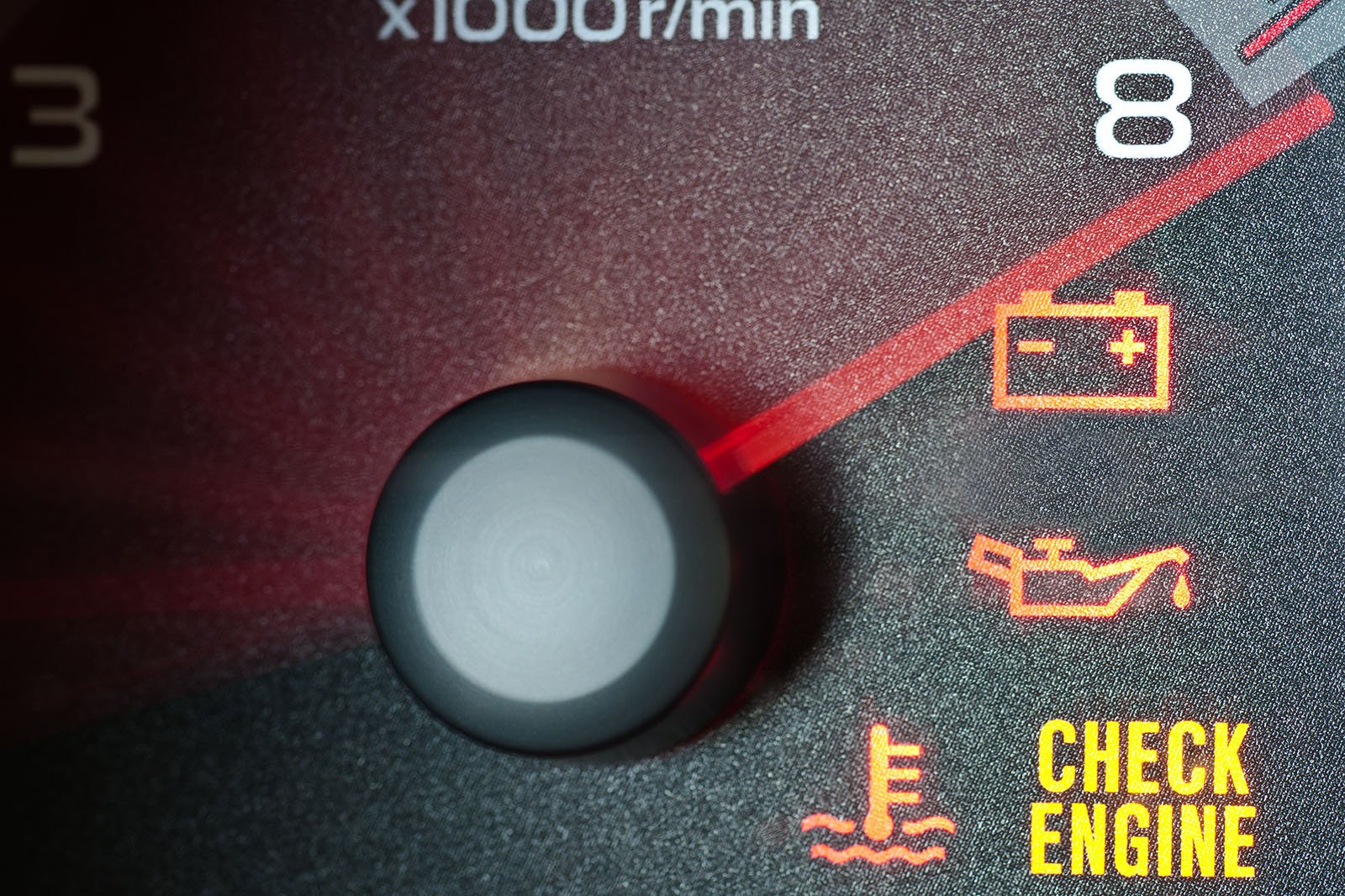 A red symbol that looks like a dripping watering can is arguably the most serious warning light after brakes. It can mean the engine’s oil level is too low, the temperature is too high or the oil pressure is too high or too low. All of those things are bad news for an engine and can lead to serious mechanical damage, so seek help straight away. 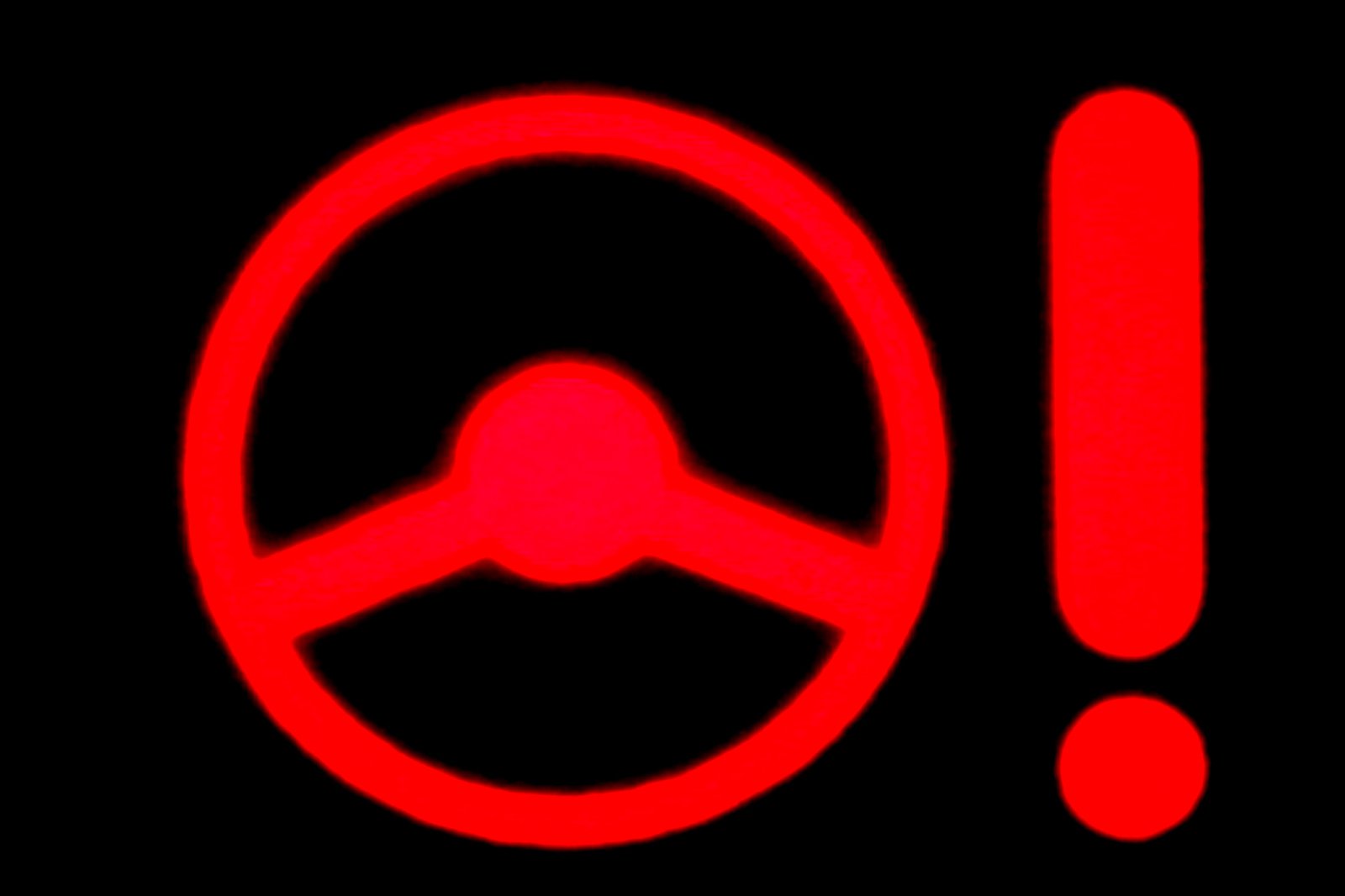 If you see a steering wheel, possibly with an exclamation mark beside it, that means there’s a fault with the car’s power steering. If the system fails completely, it doesn’t mean you won’t be able to steer at all, but the steering will become much heavier, which will make it more difficult to manoeuvre the car. 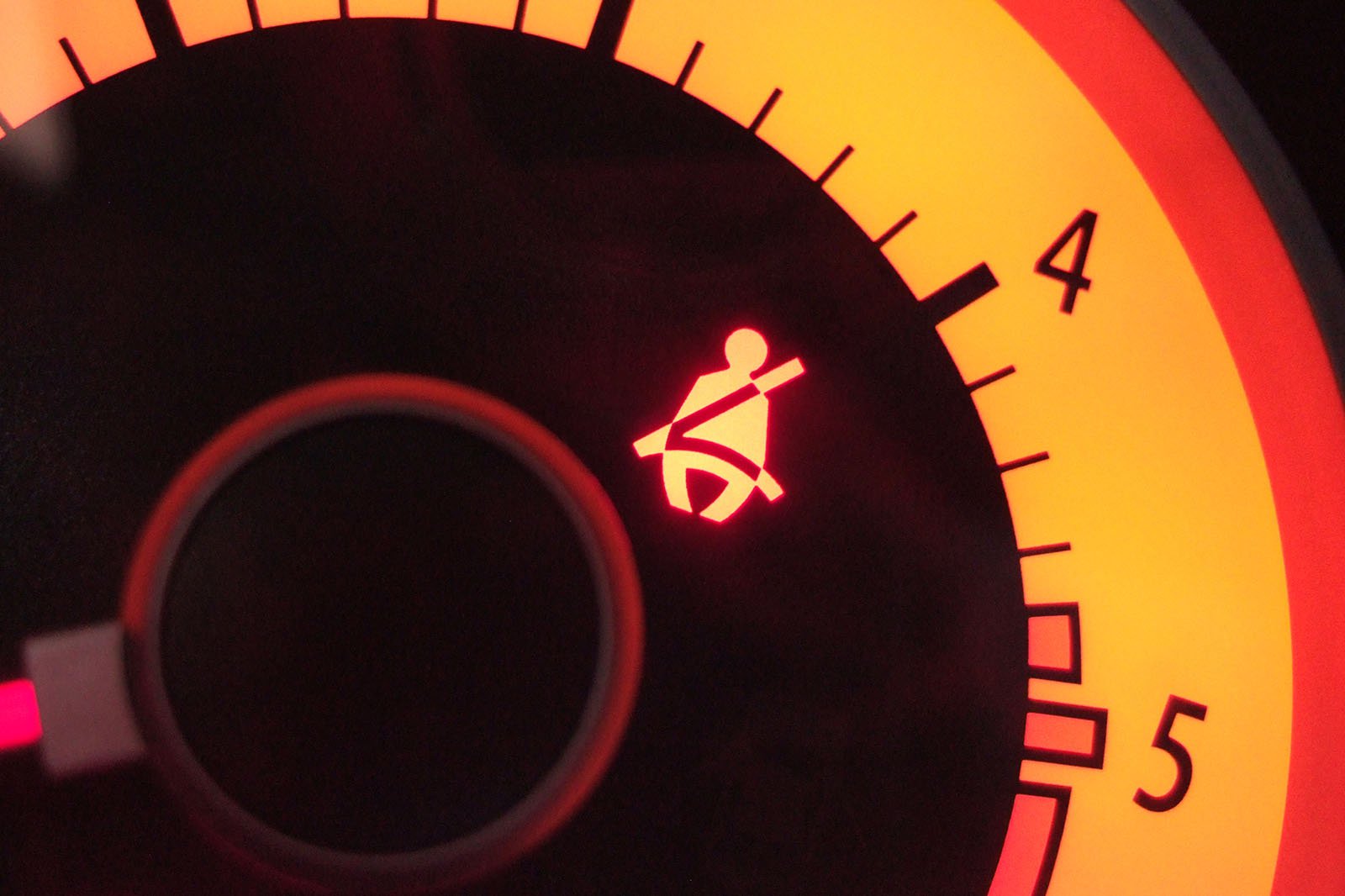 It’s an obvious one, but a red image of a strapped-in passenger suggests someone isn’t wearing their seatbelt – and you’ll probably hear a bonging noise as well. Modern car seats are fitted with pressure sensors that trigger warning lights and sounds when they detect a certain amount of weight in the seat. However, putting heavy items in the seats can also set them off unnecessarily. 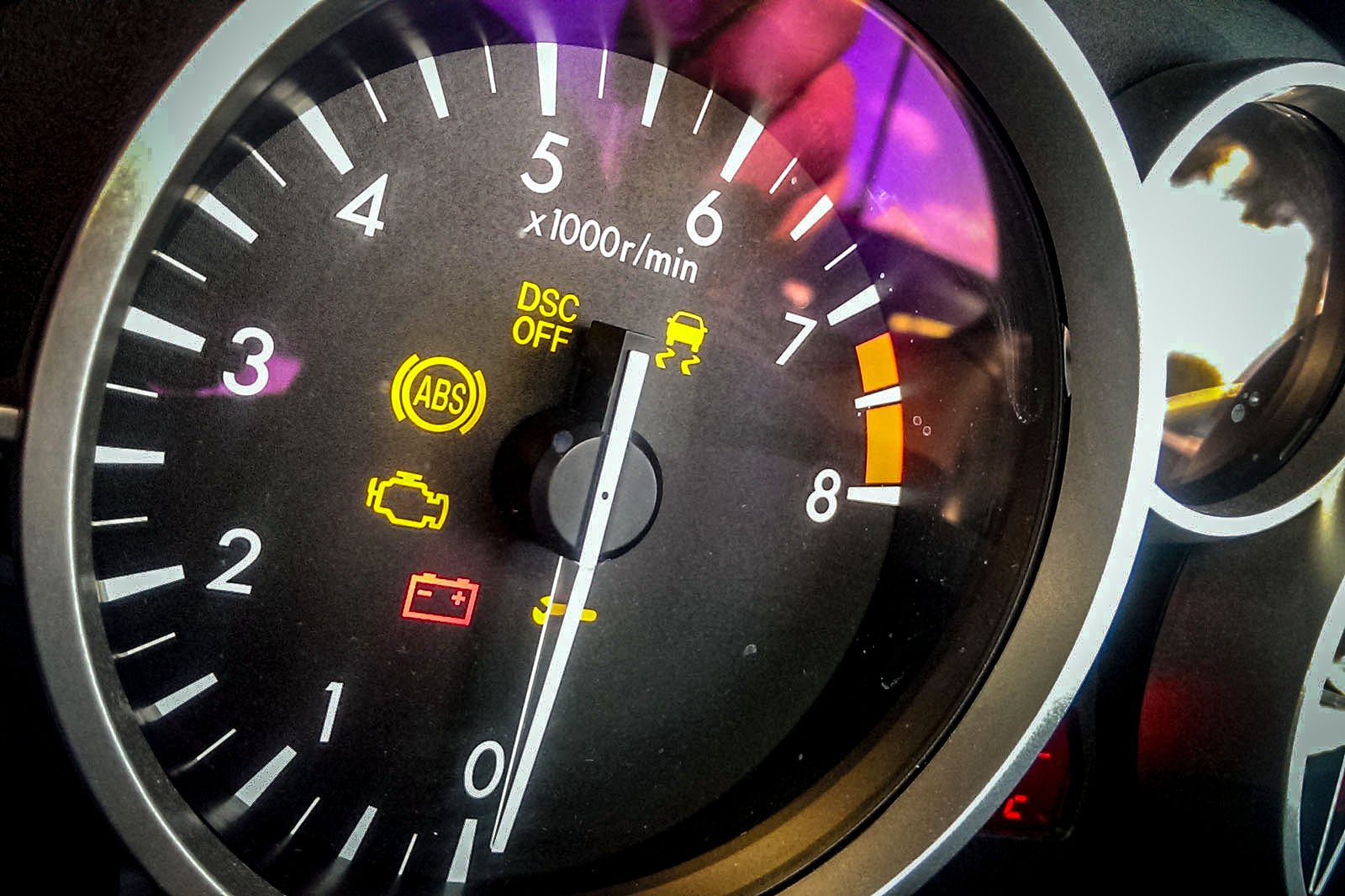 The traction control system helps to keep your car on the straight and narrow when its wheels lose grip. Sensors detect when the wheels are starting to spin and trigger a reduction in engine power and a small amount of braking to stop the car from sliding or skidding too much. When the system kicks in, a warning light that typically looks like a car with a pair of squiggles in front of it flashes. That’s perfectly normal and just means you might want to back off a bit. It's possible to switch off most traction control systems, though, which will cause the light to remain on permanently. If you haven’t done that and the light stays on, the system might not be working properly. 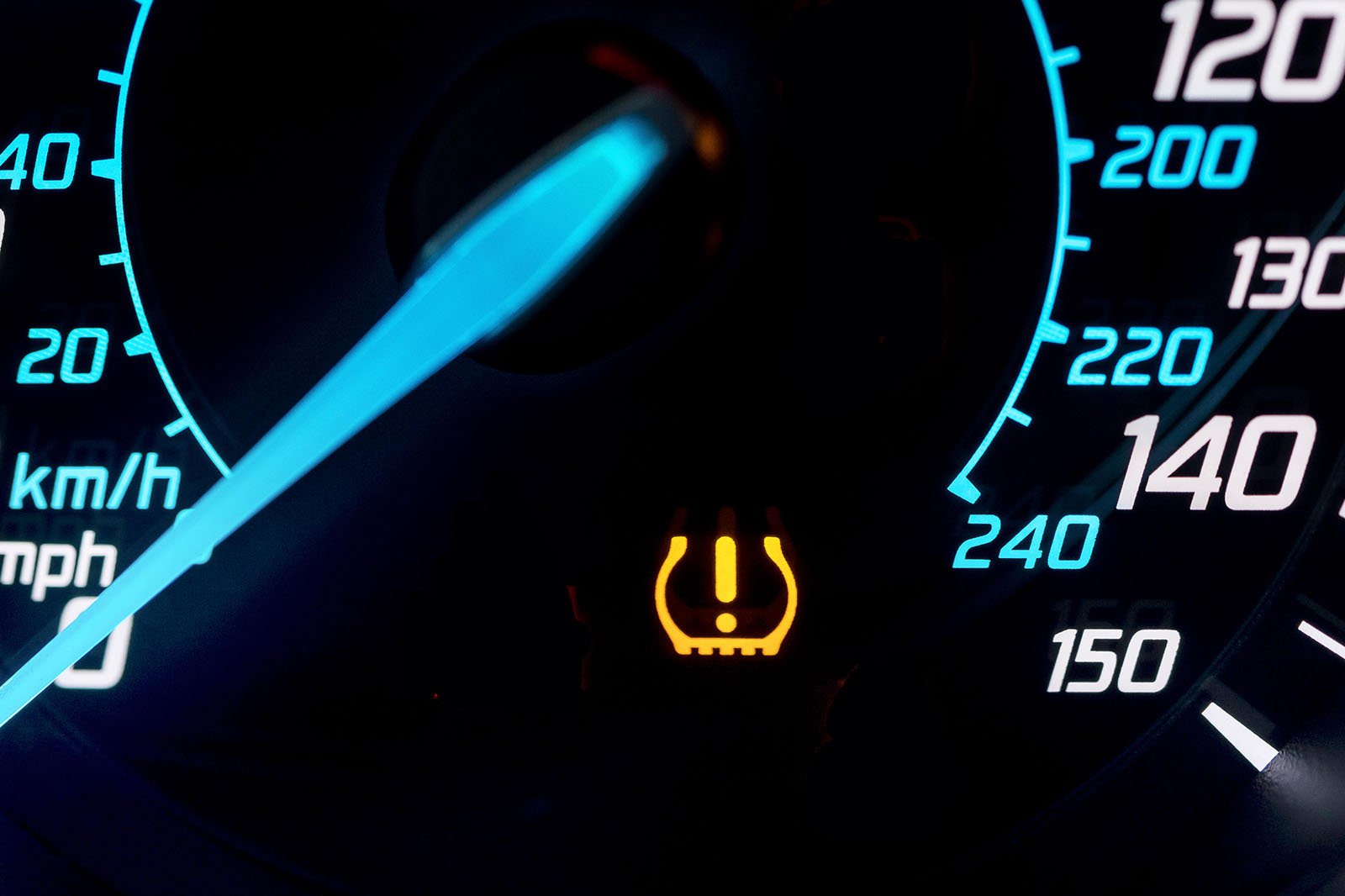 Tyre pressure monitoring systems have been mandatory for new cars sold in the UK since November 2014, and they were fitted to many models sold before then, so they’re a common feature. Sensors in the wheels monitor the amount of air in the tyres, and if you see a U-shaped warning light with grooves on the bottom and an exclamation mark in the centre, that means the pressures are too low. Topping the tyres up should sort it, but if the light comes back on, you might have a puncture or another problem.

Read more: Is a bank loan better than dealer finance? >>

Servicing and MOTOwning and running your car
Top 10s >
Best of