More for you |
DVLA warns of 20% increase in car scamsWhat Car?'s top 10 used electric cars (and the one to avoid)10 most unreliable SUVsWhat Car?'s best cars for less than £250 per monthGuaranteed discounts on our 2020 Award winners - save up to £19,366
Home
News
BMW sells F1 team back to Sauber
news

* BMW sells team back to previous owner * Team bought by BMW in 2005 * Sale on condition of F1 starting place... 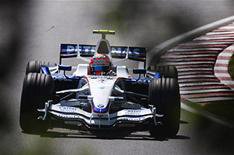 BMW has agreed to sell its Formula One team back to it's previous owner, Peter Sauber.

The German car manufacturer bought Sauber's Swiss-based F1 team in 2005, but it announced earlier that it was to pull out of the sport.

The sale to Sauber, however, is conditional on the team having a starting place in the 2010 F1 season.

Meanwhile, VW is reported to be interested in building F1 engines from 2012 and not to be out-done on the car maker/sports news, Audi has just bought a 9% stake in German football giants Bayern Munich.