More for you |
Electric car waiting times revealedCoronavirus advice: How do I renew my car's tax if its MOT has expired? Best small cars 2020Past Master: Audi TT Mk1Coronavirus advice: how to contact What Car?
Home
News
BMW's cheapest and cleanest - SUV
news 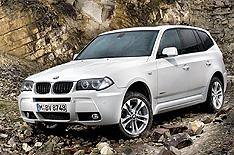 An entry-level version of BMW's X3 SUV is on sale now.

The X3 xDrive18d has a 141bhp version of the BMW's 2.0-litre diesel engine thats more fuel efficient and emits less CO2 than the previous entry-level model, the xDrive20d.

As with other X3s, this model doesn't have BMW's start/stop technology, but it has lower CO2 emissions than the cleanest versions of key rivals such as the Audi Q5, Volvo XC60 and Land Rover Freelander.

With a staring price of 27,865 for the SE trim, the xDrive18d is 1795 cheaper than the previous entry-level model. The M Sport version which features firmer suspension and cosmetic upgrades - costs 30,030.

A six-speed manual gearbox comes as standard, while a six-speed automatic gearbox - which doesn't increase fuel consumption or CO2 emissions - is a 1440 option.