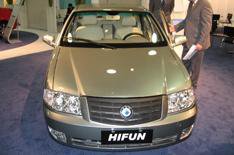 Nobody is quaking in their boots yet, but the presence of five Chinese car makers in Detroit has underlined an emerging trend.

Geely International Corporation was at the show for a third time, the Changfeng Group for a second year and BYD Automobile, Chamco Auto and Li Shi Guang Ming Automobile Design Company were newcomers. Between them, they showed everything from 4x4s to saloons and electric cars.

If all goes according to plan, Chamco Auto will be the first to import cars into the USA, and plans to roll out its Zhongxing 4x4 later this year.

There are sobering facts to consider, too, though. Geely, for instance, previously attempted to import its Freedom Cruiser, but failed crash standards.

While company officials say it has come a long way since then, the sight of one of its executives trying to hastily fix a misaligned bonnet on its Hi Fun model in Detroit did little to inspire confidence.

Few doubt Chinese car makers will break out of their homeland but most predict it will take a considerable amount of time yet.