More for you |
The most & least reliable executive carsSsangyong Musso long-term test review2021 Nissan Qashqai: what we know so farBritain's biggest new car discounts revealed: save up to 22% nowBest family SUVs in 2020 - and the ones to avoid
Home
News
Cost of living boosts public transport
news 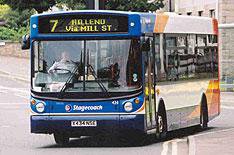 The rising cost of living is encouraging people to travel by bus and train rather than fuel their cars, according to Go-Ahead, the rail and bus operator.

The transport group says that passenger growth in its bus and rail divisions has accelerated strongly since April, attributing the change to the tough economic climate.

Other reasons suggested for the shift include a growing awareness of the environment and stressful road congestion.

Go-Ahead Chief executive Keith Ludeman said: 'People tend to only look at the marginal cost of a journey, the petrol they have to put in their car. So they are keeping their cars, but being more selective about what they use them for.'

Meanwhile, passenger numbers on its Southern and Southeastern rail franchises rose by 6.7% and 6.4% respectively over the past 12 months.