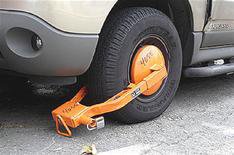 Councils are under pressure to repay hundreds of thousands of pounds worth of parking fines after enforcing unlawful traffic and parking restrictions, according to the BBC.

Fines are said to have been levied despite incorrect road markings and on parking bays which are too small.

The Department of Transport said it expected councils to 'seriously consider' repayment of illegal fines.

Alan Stanton, Labour councillor in Haringey, said one borough continued ticketing two yellow box junctions in Tottenham, north London, even after they were found to be unlawful.

Haringey council said that when it discovered the boxes were illegal it stopped enforcing them and gave refunds to motorists who appealed.

The BBC has also discovered that the entrance to a bus and tram lane that was incorrectly marked has earned Sheffield City Council 350,000.

Caroline Sheppard, chief parking adjudicator for the National Parking Adjudication Service for England and Wales, said motorists should appeal if they believe they have been wrongly fined.