More for you |
Can I do driving lessons and take my driving test during the coronavirus pandemic?Ford Kuga long-term test reviewThe best leasing deals on our most in-demand carsHow to spec a BMW 4 SeriesSeat Leon plug-in hybrid long-term test review
Home
News
Crackdown on lawbreaking foreign drivers
news

* Fines for foreign drivers * Cars may be immobilised * Plans in place by spring... 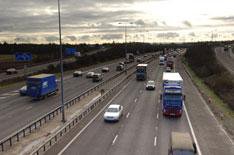 Foreign drivers who break the law could face on-the-spot fines and having their vehicle immobilised under new government proposals announced today.

Police and officers from the Vehicle Operator Service Agency (VOSA) would have the power to issue fines of up to 300 to those who commit driving offences and who cannot provide a UK address.

As well as fining drivers, the new plans would enable police and VOSA officers to immobilise any vehicle if a driver has been found to break rules on drivers' hours or driving a vehicle with defects.

'Those who break the rules of the road will not get away with it, irrespective of whether or not they live in the UK,' said Road Safety Minister Jim Fitzpatrick.

'These tough new measures mean non-UK drivers who break our laws will find themselves in a similar position to UK drivers.'

The plans would be introduced by next spring.