More for you |
Used Ford Fiesta long-term test reviewWhat can I do about a security issue on my car? Best cars for less than £250 per monthWhy is my new car’s fuel economy so poor?Top 10 used electric cars
Home
News
Eight new Skodas in next four years
news 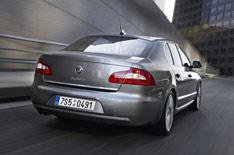 Skoda will be expanding its model range from the current six models to 11 by 2012, with five all-new cars and three face-lifts or replacements for existing models.

Superb start
First is the replacement for the Superb, which goes on sale on September 18 with prices expected to start at around 16,000.

Skoda hopes the new car is more of a match for the likes of the Mondeo than the old car, and it has one particular trick up its sleeve - the clever Twindoor system, which means the Superb is both a hatchback and saloon.

New city car, MPV and 4x4
All-new models include the Yeti, a five-seat compact 4x4 based on a concept car first seen at the Geneva motor show in 2005.

It should be on display at this year's British International Motor Show. You'll be able to buy it from the middle of next year at prices from around 14,500.

A gargantuan estate version of the (already massive) new Superb family car is likely to follow in 2010. We expect it to cost around 17,000.

Following that will be a small city car to sit below the Fabia supermini (and based on VW's forthcoming Up! city car) with prices that could be as low as 5000.

A compact seven-seat MPV will also be launched at around the same time.

Octavia goes large
A new small family car, similar in size to the previous-generation Octavia (around the same size as today's Golf) will also be launched, and it could arrive as early as next year.

This also suggests that the next Octavia will be even larger, pushing it into the family car class.

Meanwhile, the existing Octavia gets a face-lift at the end of this year, while the odd-looking Roomster five-seat MPV will also be freshened up, but that's not likely to happen until 2011.

Skoda has admitted that its current dealer network needs to expand to meet ambitious growth targets with the new models and expects to appoint 21 new dealers, especially in and around major cities, in the near future.