Electric pavilion - cars you can charge 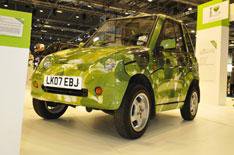 Its probably over-stating the case to call it a vision of the future, but the electric pavilion is showcasing some of the best zero-emission technology available today.

Perhaps the best known is the G-Wiz, although the electric cars fame is as much based on its crash test shortcomings as its pioneering technology. The two-door city hatchback has a range of 48 miles and with a top speed of 50mph, it is best described as a city-based car.

The GEM E4 looks more like a golf cart, but at least its hefty dimensions mean it can seat four comfortably. The lack of doors may be less appealing, though, as is the 30-mile per charge range.

The Quiet Car Company produces the imaginatively-named Quiet Car 1 and Quiet Car 2. The 1 is a two plus two seater with a 65-mile range, while the 2 is a four-door, four-seater with a range of 65 miles and top speed of 50mph.

Elsewhere, you can see the Nice Car Companys Mega City, the Smart EV and a model of Nissans Pivo, all of which you can read about elsewhere.