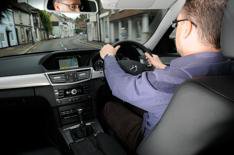 If you judge a company by how well it acts when things go wrong, Mercedes is doing pretty well. It dispatched a recovery vehicle and organised a replacement car within an hour. From breakdown to getting back on the road in the new car took two hours, which wasnt bad considering the breakdown happened at 11pm.

The repair took a week about average according to readers of whatcar.com. Some had to wait up to four weeks, though.

Thankfully, that was the only major reliability issue. The tyre-pressure-warning light came on once, so I took the car to Mercedes-Benz World without an appointment. I was given a coffee while a technician checked the car. He found a nail in the tyre, took it out and repaired the puncture for free. Excellent.

The only other trip to a dealer was for the first service, which came at 16,000 miles. I wanted to see if other dealerships were as good as Mercedes-Benz World, so chose Mercedes-Benz Guildford (01483 654000).

Unfortunately, the booking-in process was a bit of a faff. There wasnt a courtesy car available when I wanted the work done, and the collect-and-return service was available only during the week, when I needed a car to get to work.

Buying information
Running costs
Servicing and repair costs
Depreciation index
List- and Target PriceIn the end, my appointment was scheduled for a Saturday morning, and I decided to wait at the dealership until the car was ready. I took along my three-year-old daughter, which was a mistake, because after 10 minutes we were both bored. The actual service was fine but, with hindsight, the multi-floored Mercedes World with coffee shop and loads of distractions would have been a far more entertaining bet. At 220, Guildford wasnt any cheaper than Mercedes World, either.

There were two other things I loved about the E-Class: its fuel economy and its range. On my trips to Scotland, the journey was always completed on a tank of fuel, thereby negating the need to refuel at expensive motorway service stations.

My overall fuel consumption of 43.6mpg was around 10mpg less than the official figure, but given that much of my daily journeys were in stop-start traffic, I was pretty happy. On one journey to Cambridge, the trip computer read 60mpg, which gladdened the wallet somewhat. Carbon dioxide emissions of just 139g/km also kept company car tax bills down.

One invaluable system was Hill Hold Assist, where you firmly press the footbrake and the car is kept stationary until you pull away. The reason it was invaluable? Mercedes persists with a foot-operated parking brake, which is extremely awkward when youve got an accelerator and a clutch to operate, and only two feet! A push-button handbrake would be a much better set-up.

So a year with the Merc hasnt been without its problems, then, but as a comfortable, relaxing and stress-free package, the easy E-Class did it for me.