While you might think two-cylinder Fiats hark back to the swinging 1960s, this Twin Air engine is bang-up-to-date.

Its a small, lightweight engine that incorporates some clever technology that makes for some impressive headline figures: 84bhp, CO2 emissions of just 95g/km and average fuel consumption of 69mpg (if you opt for the Duralogic semi-auto gearbox you can expect 92g/km and more than 71mpg).

However, performance isnt compromised for the sake of economy 0-62mph is covered in 11.0 seconds and the top speed is 107mph. Fiat says the turbocharged Twin Air engine is equivalent in power to a 1.4-litre unit, but with far better fuel economy and ultra-low emissions.

To further help economy, it comes with an engine stop-start system and gearshift indicator.

You can't help but notice the distinctive thrum of the engine, but its relatively quiet at low revs and Fiats attempts to keep vibrations to a minimum certainly seem to work at low speeds around town.

However, take the car out of the city and things arent so good. Its noisy, a bit unrefined and you can hear the turbo whirring as you accelerate.

There are two driving modes Standard and Eco. In Eco, power delivery is restricted and the steering lightens up, which, says Fiat, enhances the cars credentials as a city run-around.

How much and when can I get one?

Exact pricing wont be announced until closer to the cars UK launch in September. However this won't be a bargain-basement entry to 500 ownership.

You wont have to pay for road tax thanks to its low CO2 emissions and Fiat says servicing should be cheaper than in other 500s thanks to the engines simplicity.

Fiat says the 84bhp Twin Air engine will follow into other models and other brands in the coming months. It will be interesting to see if Ford takes up the engine with the Ka, which is mechanically identical to the 500.

Fiat does say that this small 900cc engine, mated with a 10- or 15kw electric motor will form the basis of a hybrid. It will be a mild hybrid meaning it wont run on electric power alone with a relatively small battery pack, which will keep costs and weight down. Fiat wont be drawn on further details or a timescale. 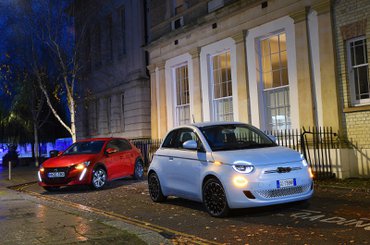