More for you |
Every 5-star car on What Car?Used test: Maserati Levante vs Porsche MacanNew issue of What Car? magazine on sale nowMost and least reliable small SUVsRevealed: the car makers whose discounts have got bigger since lockdown
Home
News
How good?
news 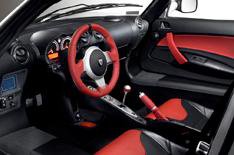 The Signature Edition might be fast, but its not quite as good to drive as the Lotus Elise that its based on.

Its by no means disappointing compared with most of what we drive day to day, but its not as sharp and lively as the Lotus.

For all its carbonfibre body weight-saving measures, the Tesla is 300kg heavier than the Lotus, and most of that is placed at the back of the car.

As a result, its tuned to understeer as standard, although Telsa wants its customers to be involved in the set-up. Ask for a tail-happy Roadster and thats what youll get.

It would be interesting to see how much the steering could be sharpened, too, since its very heavy, even at high speed, and doesnt provide enough feedback.

The Tesla is also left-hand-drive only for now, and because its so low down, its very difficult to see around traffic to overtake.

Its an issue in a car with this kind of performance, so until right-hand drive models are available, you might want to take a co-pilot you can trust with you.