It's not all niche 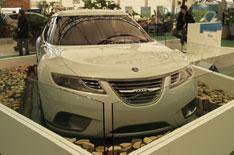 Not all the cunning plans for emissions reduction are coming from niche companies with off-the-wall projects.

In the UK for the first time, the Saab 9-X Bio Hybrid Concept car combines bioethanol fuel with the next-generation Saab Hybrid system.

Hinting at one direction for future hybrid technology, the car's hybrid system uses a lithium-ion battery with a significantly higher power capability than conventional batteries to capture more energy.

The 9-X Bio Hybrid also takes in solar energy via a cell in the glass roof, using this power to charge the hybrid battery pack.

Cars powered by bioethanol are already on sale, but don't expect all the other technology showcased by the 9-X to land on production cars at once.

Saab says that all the ideas incorporated on the car are being seriously evaluated, but they may take some time to reach production.