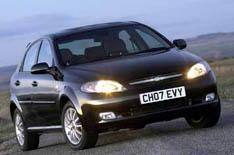 Chevrolet's plan to replace its entire model range in four years will begin at the Paris motor show in October when it will reveal a new four-door saloon to replace the Lacetti.

There will eventually be a five-door hatch based on the platform that will also be used for the next Vauxhall Astra late next year. Chevrolet, like Vauxhall, is part of the giant GM Group.

Wayne Brannon, executive director of Chevrolet in Europe said: 'We will spring a lot off products of the group's global architecture.'

In the pipeline is a small car to replace the Matiz, which will be close to the Beat concept car that has been shown at several motor shows.

Chevrolet also plans two MPVs that will share the platforms of the next Vauxhall Meriva and Zafira, and Brannon wants to see two more 4x4s to run alongside the Captiva.

There will be a replacement for the Aveo within the next two to three years offering a small diesel engine for the first time. This will likely be a 1.3 or 1.4-litre unit based on the current 1.3 that GM shares with Fiat and Suzuki.

Progress is being made on the Volt plug-in electric car, which will have a small petrol or diesel engine to serve as a generator to recharge batteries on the move.