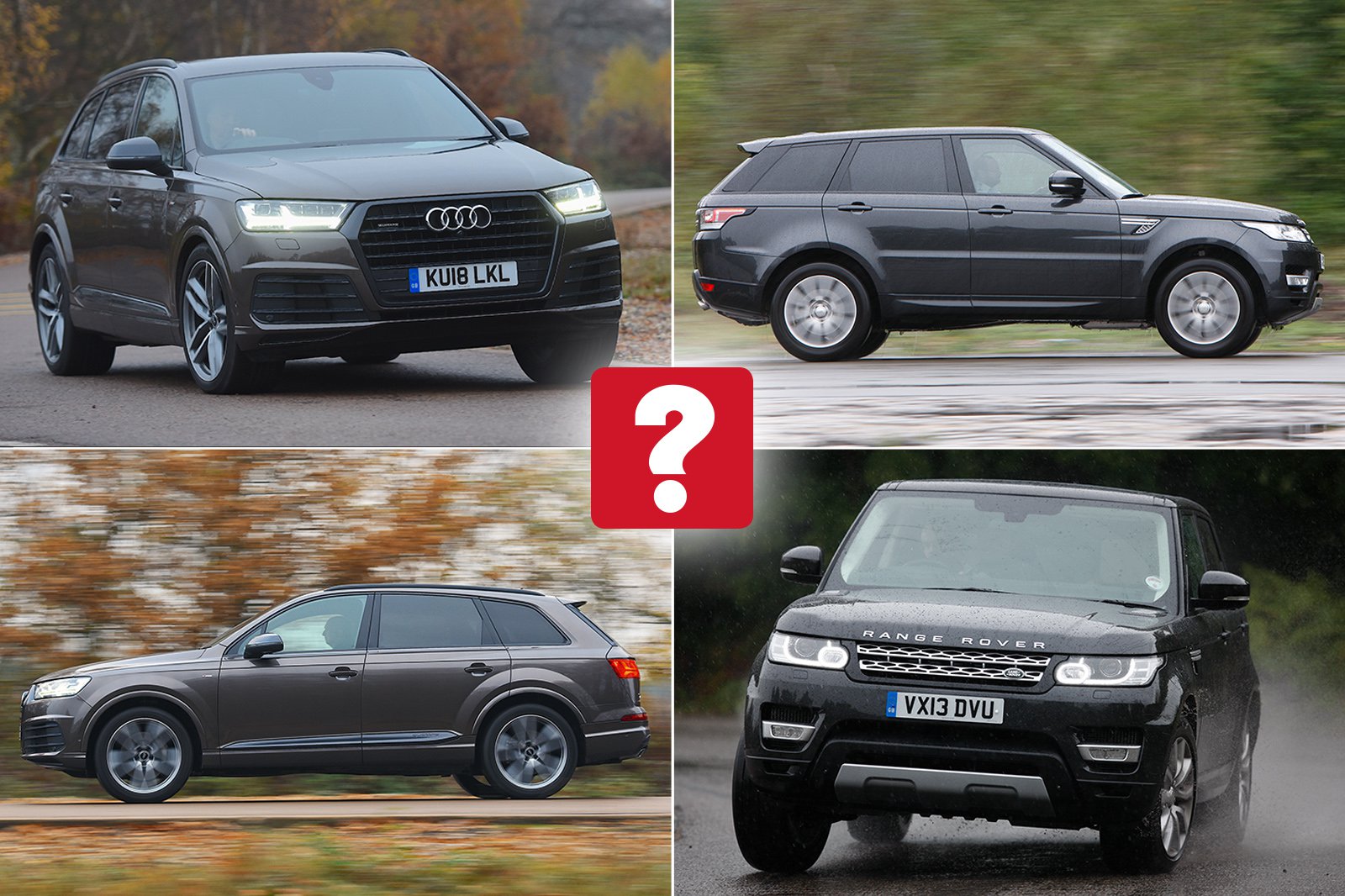 Big, practical luxury SUVs don’t come much better than the latest Audi Q7: it’s just been named the best Luxury SUV in the 2019 What Car? Awards, after all. It rides like a limo and there’s enough rear leg room for even the tallest of adults to stretch out. Refinement is stellar, too, isolating passengers from the vulgarities of wind and road noise. Even the sound from the potent V6 diesel engine is well suppressed. It’s hard to think of a better car for the money.

However, buying used can be a tempting alternative, particularly when it's something a year or two older and originally cost considerably more to buy. That’s exactly the case here because, for the price of the Audi, you could find yourself behind the wheel of a lightly used Range Rover Sport. The Audi has great brand prestige, but the Range Rover Sport has real road presence, particularly with that legendary brand name picked out in bold lettering on that famous clamshell bonnet.

But which of these two uber-luxury SUVs would suit you best? Read on to find out.

Step inside either one of these behemoths and you’ll be treated to a very agreeable driving environment filled with fine leathers, high quality materials and thick, sumptuous carpets. Neither one will leave you wanting more in the gadgets department, either.

The Audi definitely has the most functional layout of the two. All Q7s now get Audi virtual cockpit as standard, replacing conventional instruments with a 12.3in screen to display and control all kinds of function. Not only does it show a speedometer and rev-counter: it can also  provide sat nav maps, media and phone data, vehicle information and much, much more. There’s also a secondary screen in the centre of the dashboard that pops up to supplement virtual cockpit or to allow the front seat passenger to take charge of things, such as changing what music you’re listening to.

As with all Audi interiors, it is exquisitely finished with top-quality plastics everywhere – even in the rearmost seats where most car companies try to cut costs.

On first acquaintance, the interior of the Range Rover Sport has the Q7 beaten in the style stakes. The design has that ‘wow’ factor that you’d expect for a luxury vehicle and because there’s a central touchscreen, you’ve fewer buttons for a calming, minimalist space.  However, some of the switches that do appear on the dashboard don’t have the same tactile feel as the ones in the Q7, meaning the Sport can feel a little bit cheaper in isolation. But, you still get a virtual display instead of dials just as you do in the Audi, and even if it isn’t anywhere near as easy to use, you can still control various functions through it.

This being a Land Rover at heart, the Range Rover Sport will give you much more off road information than the Q7. There was even the option of a sonar system that can be viewed in the central display. It’ll tell you the depth of the water you’re driving through and even warn you if it’s getting too deep.

Range Rovers have always been famed for their commanding driving position – a virtue that influences many buyers of large SUVs  – so it may come as a bit of a shock to find that the Q7 gives you what feels like the loftier perch. That’s because the Sport has been briefed to make you feel like you’re sitting in something, well, sporty. Compared to a regular Range Rover, the dashboard is taller but the seat is mounted lower for a hunkered-down feeling of being in, rather than on top of, the car.

While the Sport provides rear seat passengers with a conveniently flat floor rather than the annoying hump of the Q7, the latter has more space for occupants. It's also alone in accommodating three child seats across the middle row thanks to three sets of Isofix points. The rear bench in the Sport isn’t as wide and can only house two booster seats.

While buyers could specify their Sport with two extra chairs in the boot, the Q7 offers far more generous third-row accommodation. Of the two, the access aperture requires less contortion to negotiate, there’s more leg room and there are child seat mounting points. However, it's still a struggle to install a young child and its seat back there; the Land Rover Discovery is a much better bet if you need a full seven-seater.

Due to the angle of the rear window in the Sport, its boot isn’t as useful as the one in the Q7. If your Sport has the third-row seating option, you’ll need to drop the seats if you want to pack anything more than a squashable overnight bag. You can get a week’s worth of shopping behind the rearmost seats in a Q7, making it arguably the more practical car.