Who’d have thought that we’d be recommending the Volvo XC90 not just because its interior is even more thoughtfully laid out for family life, but because it offers a sportier drive than a Q7? It might seem strange, but it's true. Even though the XC90 doesn’t come with anything like the power of the Q7, the 2.0-litre diesel in the D5 version still offers punchy enough performance, while precise steering and excellent body control make the XC90 a more wieldy beast than the Q7.

If you’re prepared to spend a bit more money, examples of the Porsche Cayenne start to become available. It has the edge on the Range Rover Sport in terms of handling and overall interior quality, but interior space is noticeably tighter.

Emotion often plays its part in choosing a car, and for many, the Range Rover Sport's looks, desirable image and cosseting interior will give it the edge. It can also hold its head up high when it comes to driver appeal, and the Q7 has no hope of keeping up with it off road because it simply doesn’t have all the clever all-terrain technology the Sport has. Whether or not this should matter to the vast majority, who rarely so much as mount a kerb, is another issue.

Putting emotion beside, though, the Audi Q7 is the one to go for if practicality is important to you; few cars are as roomy inside or quite so well appointed. It’ll be perfect for long distance trips because of the low noise levels, too, and that V6 diesel engine is a peach. It could also be rather more dependable than the Range Rover, and you'll probably get on with its infotainment system rather better, too.

< Previous | Next: Everything you need to know about the used Range Rover Sport > 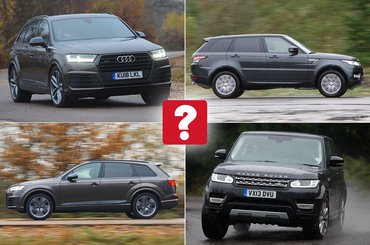