* Seat will fit in superminis * Four versions to choose from * Range starts at 1299, though... 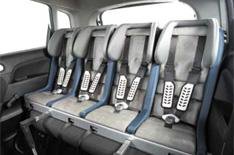 A new child seat that can hold up to four children in cars as small as superminis is now available.

The Multimac seat is designed to carry children from birth up to 12-years old and has been given the United Nations ECE 44.04 approval that all child seats have to meet before going on sale.

There are four versions of the Multimac available three four-seater versions, with varying seat widths, and a three-seater design.

Fitting
All seats attach with tethers to a cars existing seatbelt buckle mountings, rather than being secured using the belts themselves as is more common, so wed recommend that these straps are installed by a qualified mechanic.

Once the tethers are fitted, its relatively easy to install and remove the Multimac, but due to the seat's size and weight it is likely to be a two-person operation.

Once familiarised with the equipment it took us little more than a minute to fit, or remove the seat. The Multimac also offers an extremely secure fit.

All four of the Multimac seat squabs can be removed to allow for rear-facing infant carriers to be used. Harnesses can also be adjusted to one of seven heights as your children grow.

Safety
The Multimac has been put through the most demanding test combinations using lighter and heavier dummies representing newborn and 12-year-old children.

Chest load and head displacement of the dummies used in the test was significantly within the ranges allowed by the 44.04 standard, whether one newborn infant dummy was used or four 32kg dummies representing 12-year-olds.

How much
Quality and versatility comes at a price, however, with the Multimac range starting at 1299. If have lots of children to carry around, though, you might well find that you could spend more on individual seats.

The price of the Multimac might also pale into insignificance alongside the cost of changing your car as family or other requirements grow.